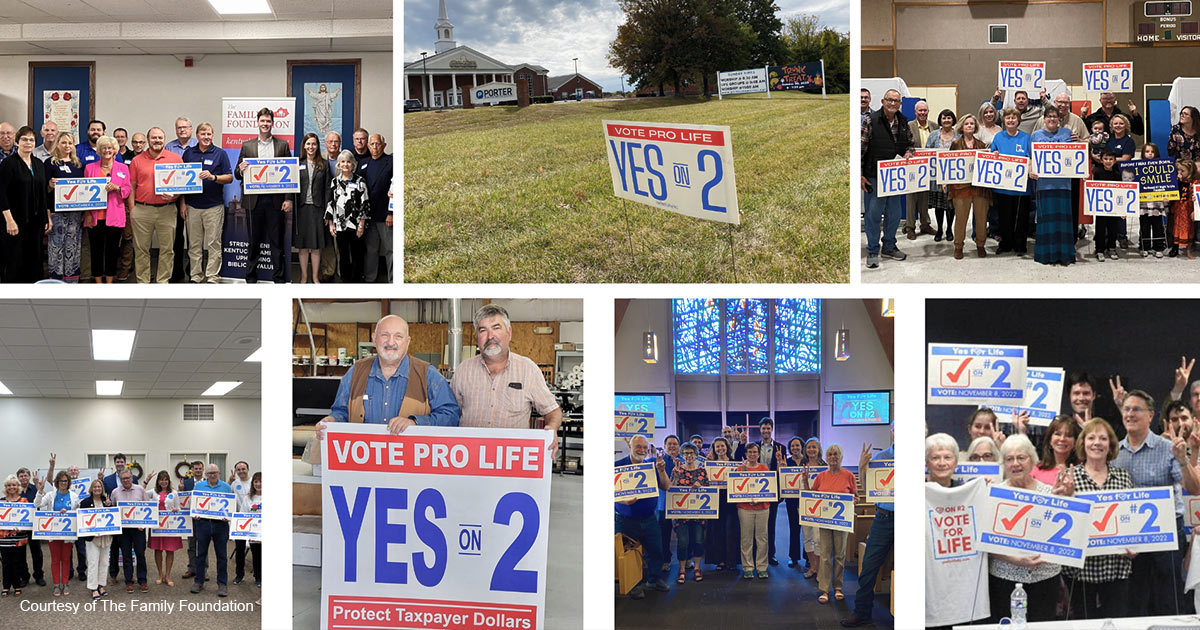 4 Reasons Why Voting ‘Yes on 2’ Is the God-Honoring Vote for Ky. Christians

On Election Day, November 8, Kentuckians — for the first time ever — will have the opportunity to directly vote to protect the sanctity of preborn human life and safeguard our tax dollars from paying for the horrors of abortion by voting Yes on Amendment 2.

When Kentuckians established our state constitution in 1891, we did so “grateful to Almighty God for [the] liberties we enjoy” and “invoking the continuance of these blessings.” But, in the aftermath of the righteous U.S. Supreme Court decision in Dobbs that overturned Roe v. Wade, radical out-of-state abortion promoters and activist judges within the commonwealth are seeking to erase our preborn children’s inherent and inalienable “right of enjoying … their lives and liberties.”

Amid this unprecedented attack on Kentucky’s constitution seeking to enshrine a “right” to kill a child in the womb, voting “Yes on 2” is a God-honoring testimony to our culture, an act of love towards future generations of preborn Kentuckians, and faithful stewardship of your freedom to vote. Here’s why:

Every human being, including preborn children in the womb, deserves the most fundamental, God-given human right — the right to life. Amendment 2 upholds that fundamental right with its stated purpose to “protect human life.”

Amendment 2 will ensure Kentucky’s Human Life Protection Act, Heartbeat Law, and other pro-life laws are able to continue saving lives by protecting children in the womb.

A long and bipartisan consensus of preventing taxpayer funding of abortion is being threatened by the abortion industry’s increasingly radical push for public funding of abortion-on-demand across the nation. Forcing citizens, against their will, to fund the killing of preborn human children goes against the God-given role of government to punish evil and promote good (Rom. 13:3-4).

Since 1879, Kentucky’s courts have recognized the General Assembly’s legislative prerogative to protect preborn lives by prohibiting abortion with a clear exception for the life and health of the mother. In fact, Kentucky’s elected legislators have done so with bipartisan support since 1910.

Amendment 2 is necessary to preserve the general assembly’s ability to protect preborn lives and prevent an activist decision from the Kentucky Supreme Court that would remove abortion policy from ‘We the people.’

Kentucky has a long, rich history as a pro-life state, but pro-abortion forces outside of Kentucky (which are funding the opposition to Amendment 2) want to transform our commonwealth. While states like California are becoming abortion-on-demand “sanctuary” states, passing Amendment 2 will ensure Kentucky cements its pro-life values.

For nearly 50 years, Roe imposed a government-sanctioned culture of death on our nation, as more than 63 million preborn human children were slaughtered throughout America. But praise be to God that Roe is no more, and YOU now have a voice … YOU have a chance to vote “YES on 2” and save lives!

Recognizing the truth of God’s word that every preborn child is fearfully and wonderfully made (Psalm 139:13-14), my hope and prayer is that Christians across Kentucky will rise up in this God-ordained moment for life and honor the Lord with their vote on November 8 in support of Amendment 2.

David Walls is the executive director of The Family Foundation in Kentucky.