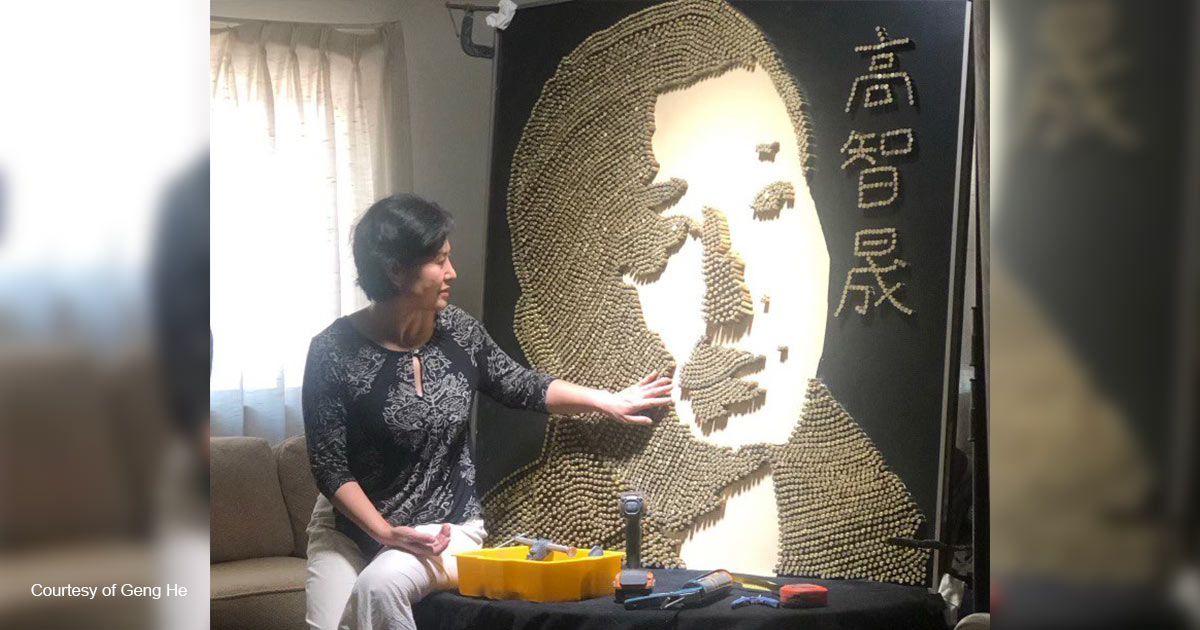 *Editor’s note: The following is the testimony of Geng He, the wife of Chinese human rights attorney Gao Zhisheng, who worked to defend religious minorities in China and document human rights abuses.

My name is Geng He, and I am the wife of Chinese human rights lawyer Gao Zhisheng. My two children and I have not seen my husband in 14 years. To this day, we do not even know if he is still alive. In our endless longing to see him again, we helped create this incredible art piece, “Relief Sculpture of Gao Zhisheng.”

At the end of 2021, when I attended the “Lin Zhao Freedom Award” ceremony in the capital of the United States, Washington, D.C., I met the sculptor Chen Weiming, who participated in the ceremony. We were received by officials of the United States State Department and some other dignitaries. I described how my husband, Gao Zhisheng, was brutally persecuted by the Chinese Communist Party (CCP), and how even his relatives were tormented due to their relationship with him. As a result, his sister was forced to commit suicide by jumping into a river. Her husband, Gao Zhisheng’s brother-in-law, also committed suicide by jumping off a building. Both died because of their connection to Gao. Mr. Chen expressed great remorse and expressed that the feelings evoked from their stories were beyond the range of human emotion. He said that he would like to do something to support Gao Zhisheng’s freedom as soon as possible.

Shortly thereafter, Mr. Chen heard that my son enjoys shooting. He invited us to go shooting at Liberty Sculpture Park in the desert. There were also several volunteers around the same age as my son, all shooting together.

Gladly accepting the invitation, my son shot in the desert for the first time. Meanwhile, in our spare time, Mr. Chen and I picked up the bullet casings left by the children after their firing. Mr. Chen looked at a cartridge case thoughtfully. He suddenly had an idea: What if we used these cartridge cases for a piece of artwork? Amazed, I was greatly inspired and replied, “Let us make a portrait of Gao Zhisheng!”

There has been no news of my husband for such a long time. How can a living person be kidnapped by the evil CCP and disappeared for five years! It is like evaporating from the world! The bullet casings used to create a portrait of Gao Zhisheng are the right medium to showcase both Gao Zhisheng’s suffering and his strong character through adversity. How can there be any peace in a place like China? It is because there are people like Gao Zhisheng who stand in front of us and block bullets for us.

Mr. Chen explained that as long as we have around 5,000 bullet casings, we can begin the piece. The idea was finalized. Since then, my son no longer went shooting for leisure. In order to save enough shells, he kept shooting nonstop. Each shot fired carried the longings for his father as the crisp gunfire sound echoed through the desert. We bent down hundreds of times to retrieve the jumping bullet casings. These are not bullet shells. They are pieces of our hearts, broken and longing for our loved one!

Picking up these bullet shards was like picking up the pieces of our heart! We collected them one by one, fearing even one lost piece.

After this first shooting experience at the desert park, we found that the number of shells we collected was far from the amount needed for the relief sculpture of Gao Zhisheng. Subsequently, we arranged to have my son travel to various indoor and outdoor shooting ranges in his spare time to shoot and pick up the casings. I was worried that he was not taking the retrieval of the cartridges seriously. So I made a rule that every time he finished shooting, he had to retrieve all the cartridges before he could get another batch of bullets. What I did not expect was that my son showed more diligence about this matter than in anything else I have seen. Whenever he handed the heavy cartridge case full of bullet casings back to me, I saw his still-immature face laden with fatigue. A solemnity had replaced the lighthearted, joyous look that was on his face during previous shootings. Thinking of the burden my son had to endure, so different from his fellow peers, twisted my heart. I began to regret my decision to be so hard on him regarding the bullet casings. I even wondered whether it was reasonable to place such a heavy family burden on my young son.

To my surprise, my 18-year-old son persevered by remembering his father. After more than six months, he finally saved about 5,000 bullet casings. Our whole family was full of delight and excitement at the thought of finally beginning this difficult art project.

On June 15, my son and I loaded up all the bullet casings in the car and set off for Mr. Chen’s desert farm. Excitement and anticipation filled the air as we drove on the road together. Mr. Chen greeted us at his farm. The desert sun was scorching hot and the heat was beating down upon us. The temperature reached 107 degrees Fahrenheit (nearly 42 degrees Celsius)! I instinctively covered my eyes with my hands. I worried that my son would not be able to work in such high temperature, for if we did not have bullet casings, he would have to continue to shoot in the heat of the Mojave Desert, and then retrieve the bullet casings.

But I did not have too much time to think about it. After 10 o’clock that night, we had to drive to the Las Vegas airport to pick up a volunteer, Mrs. Xiong, and her son; they had arrived in the early morning. On the first day, we spread all the bullet casings we brought on the ground. Everyone sat on the ground around the pile of bullet casings. We started to sort the bullet casings individually, packing them into bags according to their size, color, and condition. We carefully organized all the pieces in order to begin the artwork.

Everyone’s mood was as heavy as the bullet casings in their hands. We talked about Gao Zhisheng’s life: the hardships he suffered, the persecution he experienced, the torment his family has endured over the years. ... I sighed and wept as I spoke. Everyone wept with me and we prayed together for my husband. The heavy atmosphere also inspired us to work closer together to complete this artwork — it is truly a piece soaked in the blood and tears of Gao Zhisheng and our family!

This relief of Gao Zhisheng also reminds me of Gao Zhisheng’s military experience. Even then, he was always willing to block bullets for others. We all feel the piece’s extraordinary symbolism. Now, looking back on those 20 days working on this unprecedented piece, it truly was an unforgettable experience. All the adults and children would get up at 6 o’clock every day. Mrs. Xiong would prepare breakfast for us. We followed Mr. Chen’s artistic direction and created the piece together. We lived and worked like a big family, sitting together, watching him, and chatting while working. I found myself looking at Gao’s relief, clearly remembering him.

To construct the piece, its 4.8-foot square solid wood base was placed flat on a sturdy coffee table. Then the copied design draft of Gao Zhisheng’s head portrait was placed on the black base plate. After adjusting the size and proportion, a few of us gathered together and looked at it from a distance with the image of Gao Zhisheng at hand. If anyone looked closely and saw something amiss, Mr. Chen would use a pen to draw and adjust repeatedly. After the picture was finalized, we fixed it with adhesive tape and finally started production.

First, we had to select the right size and color of the cartridge for each section. Then, someone would drill a hole with an electric drill and suck up the sawdust with a vacuum cleaner. Another would then drive a nail into the hole with a hammer and glue the cartridge case with a glue gun. Finally, we would press the bullet casings onto the nails. A minimum of six steps were required to install each bullet casing to the statue.

After the first day, each of our hands were scabbed in different places, especially when we pushed the bullet casings into the hot glue. After a few hours, our wrists would swell up, and our fingers would become so red and swollen that they could not use them anymore. At this time, I would use my legs and knees. I also used pincers and other tools to help the process sometimes. At the end of each day, our hands and legs would be swollen and scarred. Every day, we worked until midnight or well into the early morning. We were working an average of 18 hours each day. Here, I would like to express my special thanks to our volunteer Mrs. Xiong, who came to us from New York with her son despite being ill at the time. She prepared three rich meals for us each day and cleaned up after us. In the kitchen where there was neither an air conditioner nor a fan, Mrs. Xiong persisted to the end with superhuman perseverance. I heard that when she got off the plane back to New York, she was directly admitted to the hospital.

Our whole family is also grateful to the artist Mr. Chen. For more than 20 days, Mr. Chen Weiming devoted all his creative enthusiasm and sincere efforts to this project.

Through this work of art, I hope to unite the hearts of all people. The 7,355 pieces are full of love and justice.

Thank you all so much! I know that these 7,355 bullet casings represent 7,335 hearts. But I also know that there are countless more kind hearts beating for love and justice. We all share in the pain for one person, my husband Gao Zhisheng, the man who has been brutally persecuted by the CCP just because he adheres to the professional ethics of a lawyer and holds onto his conscience. Gao has endured countless tortures inflicted by the communist thugs in secret prisons. After his last brief release from prison, he was still closely monitored. He was neither allowed any real personal freedom nor access to a doctor, until he was illegally kidnapped again five years ago. He has not been heard from even till today.

Here, we call on the international community, especially the U.S. Congress and the U.S. government to help find Gao Zhisheng, my husband and father to U.S. citizens Geng Ge and Gao Tianyu. My children and I have been tortured by longing for five years to the point of death. We just want to find Gao Zhisheng. We will be satisfied as long as we receive a call from Gao Zhisheng and simply hear his words in person.

This Gao Zhisheng relief was made with 7,355 bullet casings symbolizing the 7,355 pieces of our longing and memory of him. Every bullet casing nailed down on the relief seemed to be nailed to my heart. They were as if ten thousand arrows pierced my heart. We look up to the sky and wonder: How long will such evil last in the world? When will we see justice truly come? When will our suffering family be reunited once again?

My children and I, and all the kind people who have continued to care and show sympathy to us, are looking forward to that day!

Thank you all for listening to my story.