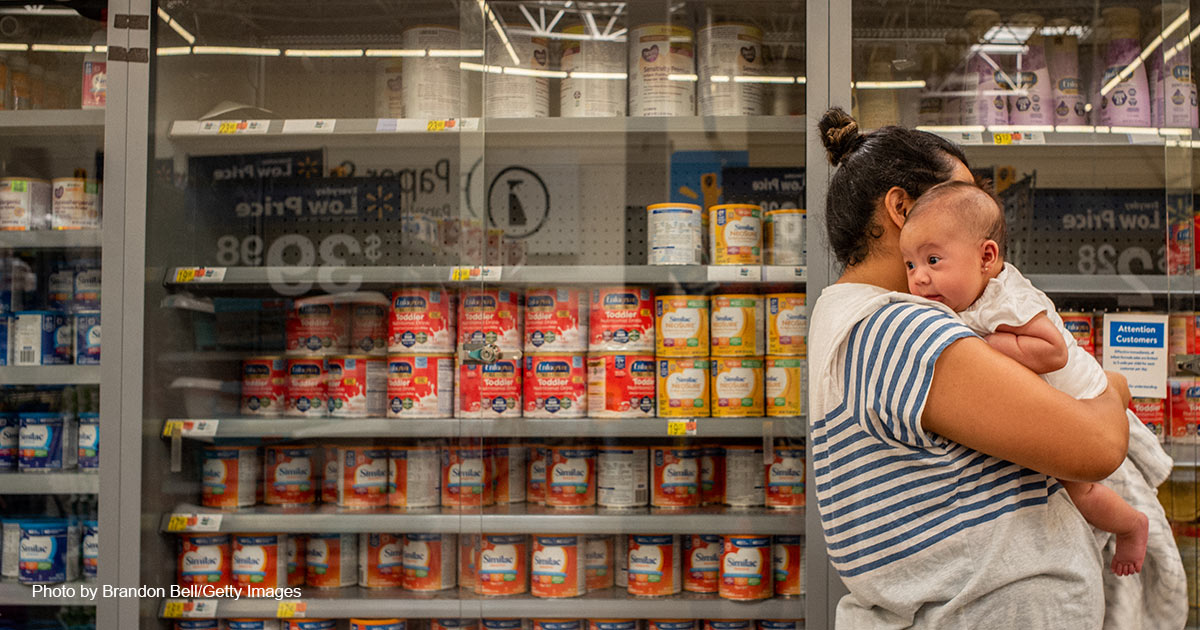 Shortages of baby formula are worse now than they were three months ago, when the crisis became a national issue. According to data from ISI Worldwide, a consulting firm helping the Food and Drug Administration (FDA) to track outages, the out-of-stock rates for the weeks ending on August 7 (26%), July 31 (27%), and July 24 (30%) were all higher than the week ending May 15 (22%), when everyone was clamoring for the Biden administration to fix the problem.

Unfortunately, fixing a problem is easier said than done. Setting aside then-Press Secretary Jen Psaki’s empty rhetoric on May 12 that the White House had “for months” been working “urgently” working to solve the problem, since public outcry in mid-May forced the Biden administration to actually address the issue seriously, they’ve accomplished many goals but few ends.

“The Biden-Harris administration is working around-the-clock to increase formula production and get more safe infant formula to store shelves,” says the White House explainer page. They claim credit for:

They show “progress by the numbers”:

After all that effort, fewer shelves are stocked with formula than when the Biden administration began working to stock them.

Part of the difficulty in solving the baby formula shortage is that economic incentives were distorted in many places. Exclusive contracts for state-run WIC benefits [Women, Infants, and Children nutritional assistance] ensured approximately half of baby formula sales relied upon monopoly supply. Steep import tariffs (17.5%) made virtually impossible for foreign companies to sell baby formula in America, under normal circumstances. Onerous FDA approval procedures raised entry costs, discouraging potential competitors and, particularly with foreign producers, delaying their entry into the market. Some of the Biden administration’s activities at least tried to deal with these problems, but others (such as “cracking down on price gouging”) created their own market distortions. Still more (such as Operation Fly Formula, or federally orchestrating the release of products “to those in need”) required enormous efforts on the part of the federal (government?) while having no effect on the underlying economic incentives.

The burden for this ongoing scandal falls squarely upon parents and their infants. Parents of some infants now old enough to eat solid food have struggled to find baby formula for half the child’ s lifespan. How many millions of bedraggled, sleep-deprived fathers and mothers have shuffled through the supermarket, hoping in vain to finally find formula this week? When they do find formula, whether in stores or online, sellers often restrict how much they can purchase, with retailers like CVS, Target, and Wal-Mart limiting shoppers to three, four, or five units per transaction.

There are many lessons to draw from this debacle (more government interference rarely solves economic problems, good intentions are no substitute for good policies, doing something is not always doing the right thing, etc.), but one takeaway seems particularly applicable: it’s harder to solve a crisis than to keep it from occurring in the first place.

No one can predict the future with absolute certainty unless the eternal God reveals it to him. But we can draw reasonable inferences about what is likely to happen “if the Lord wills” (James 4:15), based upon the order he has created. While the art of reasoning about what will happen is useful in every endeavor from running a business to buying a home, its utility in policymaking scales up as scope of its effects expand. The most important question to ask of every governmental scheme is, “and what happens then? … And what happens then?”

And what happens when someone spots an approaching crisis? There are two possible responses, which reveal something about the person’s character. “The prudent sees danger and hides himself, but the simple go on and suffer for it” (Proverbs 22:3). Some crises come with little to no warning — such as last year’s ransomware attack on the Colonial Pipeline. Others are easy to predict; indeed, they were predicted by many people: The collapse of Afghanistan, Russia’s invasion of Ukraine, historic inflation, and the baby formula shortage.

In the critical weeks and months, the Biden administration did not take the actions needed to avoid these crises. In many cases, they denied the possibility of a crisis until it was too late. They had to exert more energy and money, after the fact, to try and correct what could have been a simple fix beforehand. This has become a pattern, and not one that demonstrates prudence.

As America continues to face impending crises (Chinese, Iranian, North Korean aggression, recession, distrust of the political system), the need for prudent, forward-thinking leadership remains urgent. “The simple go on and suffer for it.” When the simple-minded rule, all those under them suffer, too.