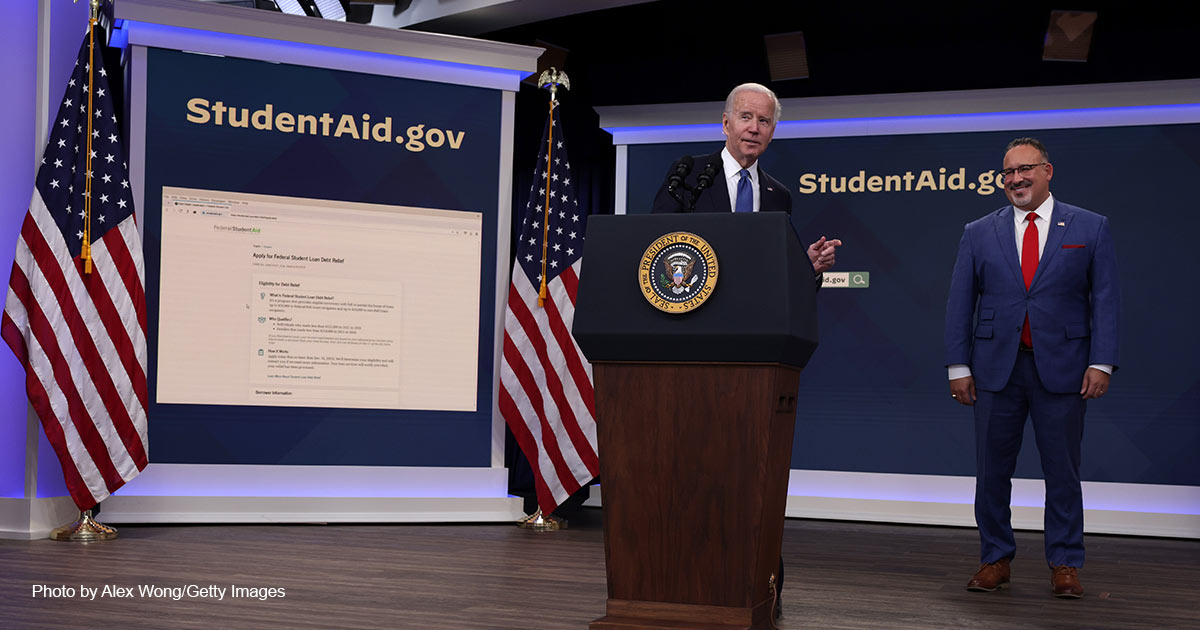 President Biden on Sunday declared his executive order forgiving student loans was “a law” from Congress, which he signed, and which is now “being challenged by my Republican colleagues.” “I got it passed by a vote or two,” the president explained. There’s only one problem: Congress never voted on student loan forgiveness; President Biden assumed that power unilaterally.

Biden hosted youthful representatives of the progressive outlet NowThis for an hour-long, sit-down interview at the White House. “You are probably aware I just signed a law that’s being challenged by my Republican colleagues,” the president said. “What we’ve provided for is, if you went to school, if you qualified for a Pell Grant … you qualify for $20,000 in debt forgiveness. Secondly, if you don’t have one of those loans, you just get $10,000 written off. It’s passed. I got it passed by a vote or two, and it’s in effect.”

Republicans erupted with outrage. “What is he talking about? Congress never voted on it,” tweeted an account associated with the Republican National Committee (RNC). The evidence against Biden is so airtight that even a CNN fact check admitted, “Biden’s claims are incorrect.” In fact, it added, “Republicans … have called it unlawful precisely because it wasn’t passed by Congress. In other words, the distinction between a law and an executive action is a highly pertinent fact in the ongoing battles over the legality and legitimacy of the policy. And in 2020 and 2021, Biden discussed that distinction himself while musing about various proposals for student debt forgiveness.”

On Monday, the White House janitors tried to clean up the mess, claiming that Biden was referring to the Inflation Reduction Act which passed Congress in August, which made “room for other crucial programs” by reducing the federal deficit. Scrub harder, boys and girls. Biden’s language was too specific to admit that interpretation. Perhaps the White House is asking us to believe that Biden melded together in his mind an August bill and a September executive order doing different things, but even that would be a stretch.

Worse yet, the White House’s spin tacitly admits the Inflation Reduction Act was never about reducing inflation (by reducing the deficit), but only reduced the deficit to create room for more spending. A spin this disastrous couldn’t keep a top upright in a dream world. At some point, honestly admitting a mistake will cost a politician less than barefaced denials.

Confessing to a verbal blunder would roll off Joe Biden’s back more than most politicians. Voters are already familiar with Biden’s history of gaffes, stretching far back into his days as a senator. We know he’ll say something dumb sooner or later, so we don’t think worse of him when it happens. Just this month, Biden has committed a string of gaffes, ranging from the economy to foreign policy to politics. Even The New York Times recently reported on Biden’s “habit of embellishing narratives,” which he “has been unable to break.” A dash of humility or self-awareness about them would go a long way. Instead, the spin leaves the public feeling more nauseous than the mistake.

Biden’s false claim that Congress passed his student loan bailout is particularly egregious, however, because it strikes at the heart of his job description. On January 20, 2021, Biden swore to “preserve, protect and defend the Constitution of the United States.” In Article I, Section 1, that Constitution provides, “All legislative Powers herein granted shall be vested in a Congress of the United States.” Biden has not only assigned to himself legislative power reserved to Congress, but he seems no longer able to distinguish between laws duly passed by Congress, and executive orders he has unilaterally issued.

One more fib in Biden’s bizarre explanation: the final words, “It’s in effect.” Fact check: False. A federal appeals court last week temporarily blocked the administration from implementing the order while it considers a lawsuit filed by six states. “In effect” it is not. Unfortunately, that doesn’t necessarily mean the lawsuit is promising. Ordinarily, a legal challenge to a measure so manifestly unconstitutional would be a slam dunk — reference the eviction moratorium and the private employer vaccine mandate. The student loan issue has snarled potential legal challenges because no one is quite sure who has standing to sue. Regardless of the legal outcome, one thing is certain — so certain that CNN agrees with the RNC — student loan forgiveness to the tune of $10,000 per borrower was definitely not passed by Congress.