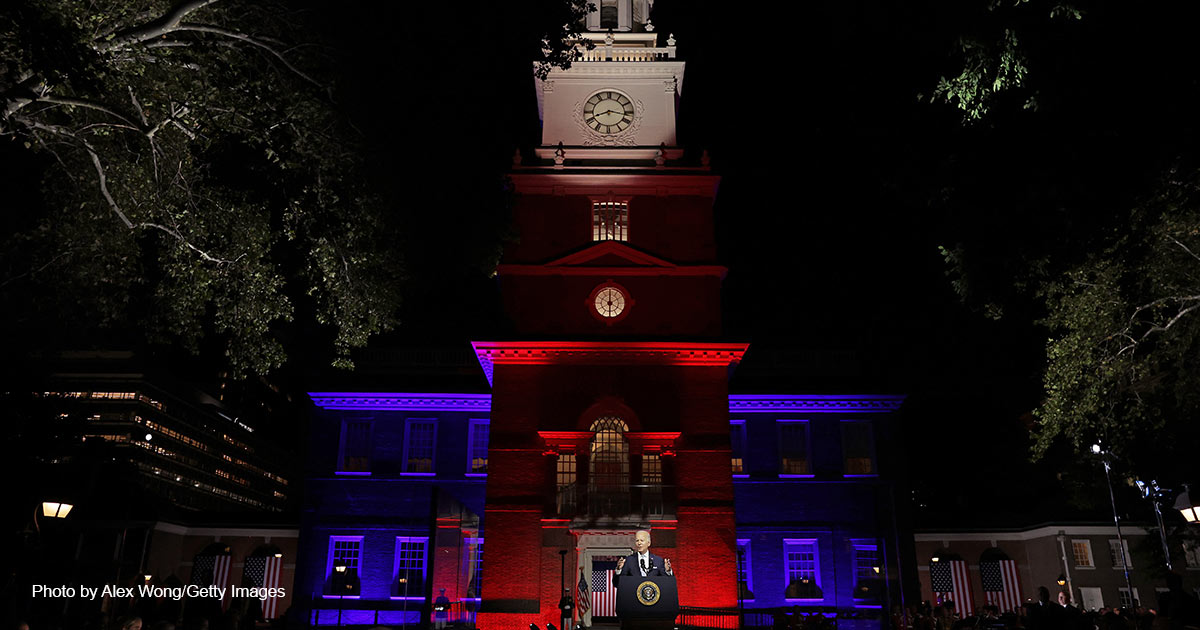 Biden: Voters Are a ‘Threat to American Democracy’

It was a dark and angry sight. Motionless soldiers flanked the grizzled head of state as he angrily condemned his political opponents in front of a black-and-red background. Worthy of a Hollywood portrayal for a third-world Hitler wannabe, the setting appropriately transformed the iconic Independence Hall into a dystopian hellscape for a presidential address that presented a “dangerous escalation in rhetoric,” according to a majority of Americans (56.8%) and independents (62.4%).

“Donald Trump and the MAGA Republicans represent an extremism that threatens the very foundations of our republic,” warned President Joe Biden. “The threat to American democracy is real.” A real threat, a fundamental threat — it seems the stakes couldn’t be higher.

The obvious question, then, is, who are these “MAGA Republicans”? Biden gave a confused answer. At first he said, “not every Republican embraces their extreme ideology. … They refuse to accept the results of a free election. … They look at the mob that stormed the United States Capitol on January 6th … as patriots.” Okay, so a fringe minority of election deniers, right?

Maybe not. Biden continued, “MAGA forces are determined to take this country backwards — backwards to an America where there is no right to choose, no right to privacy, no right to contraception, no right to marry who you love.” Wait a moment, that caricatures (not describes) all social conservatives: priests who walk each year in the March for Life, parents who show up at school board meetings, volunteers who support women at pregnancy resource centers, or any citizens who simply vote according to their belief that it’s wrong to kill an unborn child. In other words, ordinary Americans. Under that definition, even Mike Pence and the Supreme Court majority would number among “MAGA forces.”

Biden even added, “They’re working right now, as I speak, in state after state to give power to decide elections in America to partisans and cronies, empowering election deniers to undermine democracy itself.” But Biden has cried “Jim Crow 2.0” once too often to be taken seriously. He vehemently criticized an election security bill passed last year by Georgia Republicans — the same ones who acknowledged Biden as the winner of the 2020 election and resisted Trump’s pressure to overturn the results.

“MAGA Republicans do not respect the Constitution. They do not believe in the rule of law. They do not recognize the will of the people,” insisted Biden. “They promote authoritarian leaders, and they fan the flames of political violence that are a threat to our personal rights, to the pursuit of justice, to the rule of law, to the very soul of this country.” Yikes! That sounds pretty bad, almost like a “dangerous escalation in rhetoric.”

The 2020 election makes a nice segue, but the real premise of Biden’s speech was that all conservatives — not just Republican politicians, but even those who vote for them — represent a threat to democracy. But even his speechwriters understand that claim is too preposterous to articulate directly.

Even under the president’s narrowest definition of villains, those who refuse to accept the results of a free and fair election, the description doesn’t just fit “MAGA Republicans.” For four years, Democrat Stacey Abrams has refused to acknowledge that Georgia Governor Brian Kemp (R) won the 2018 gubernatorial election fair and square. (She is challenging him this year in a rematch.) Countless Democrats have baselessly echoed Abrams’s stolen-election claims, including the president’s own press secretary. After President Trump was elected in 2016, “not my president” became a common refrain, while powerful Washington insiders spent four years attempting to undermine the legitimacy of his election. Democrats even denied the legitimacy of President George W. Bush’s elections (both of them).

There’s a saying that those who live in glass houses should not throw stones. Unfortunately for President Biden, it appears his only tool is a slingshot. Is it feeling drafty to anyone?

Among other dissonant notes in his unmelodious fugue, President Biden repeatedly invoked the word “democracy,” used interchangeably with “republic” to describe the American form of government, but showed little understanding of the concept. The not-so-subtle message of Biden’s speech was that the opposition party, and any citizen who votes for it, is a fundamental threat to democracy. Voting for Biden’s opponents is now a threat to democracy, got it? Let that sink in.

For the sake of argument, I’ll grant the corrupted, modern definition of democracy as any system of popular government, including America’s constitutional republic, because the underlying principles are what matter. Rhetoric aside, Biden needs a refresher on America’s founding principles.

One basic principle upon which America’s system of government stands is that “governments … deriv[e] their just powers from the consent of the governed.” The purest form of this principle would make every decision by direct vote, but that becomes impractical once the voting population exceeds a few thousand individuals, much less 330 million. Instead, Americans consent to our government by choosing, at regular intervals, certain persons to fulfill the duties of established offices. If this were the only relevant principle, every official should be directly elected, but there are other considerations.

Another fundamental principle is that “all men” have “certain unalienable rights” and “to secure these rights, governments are instituted.” The framers of America’s Constitution sought to secure these rights not only from oppressive individuals, but also from oppressive government. To do so, they decentralized power, bestowing some in the subdivided legislative branch, some in the executive branch, and some in a Supreme Court, and soon clarified that many powers were “reserved to the states … or to the people.” For choosing a president, court justices, other officers, and initially senators, the people’s will was filtered through various other bodies they chose to elect.

In his speech, Biden distilled these two principles to the words “equality and democracy,” which he said “are under assault.” However, to employ his reductive terminology, Biden seems oblivious to the tension between these values. A popular government’s commitment to securing equal rights to all citizens is most often tested with regard to disfavored minorities. The question is, will elected officials protect the equal rights of minorities, even when it’s unpopular? Because these values pull in opposite directions, it’s rare for equality and democracy to both come under assault at the same time. More often, democracy tramples on equality (such as legalized slavery) or is trampled on in the name of equality (such as Roe v. Wade). Either extreme could lead to injustice. Our Founders sought to carefully balance these conflicting values against one another, and the balancing act continues today.

A third principle American government relies on is the rule of law. I’ve assumed this so far, but it’s worth making explicit. In America, people don’t just select government officials with limitless powers, who then give them what they want. No, we have laws that define (that is, limit) the power of elected and unelected officials. We have dispersed the power to make laws, execute laws, and resolve disputes about laws among different persons, in hopes of limiting the abuse of power. We have laws that protect minority rights, and laws that provide for a certain majority of people to execute their will. The structure of the system makes it more difficult to change laws than to change office-holders, and the laws governing the system are the hardest to change of all. Among other things, these laws help to maintain the balance between our conflicting values by making it more difficult to fall into any particular error.

So, “American democracy” cannot be simplified down to platitudes like “the people’s will” or “equal rights for all.” It’s a complex framework of interwoven principles, enshrined in law, to secure values which don’t always align. The tension between values like democracy and equality is ever-present. But, for both to come “under assault” simultaneously from the same faction, that faction must be 1) an undisputed minority, 2) manifestly opposed to equal rights for all, and 3) powerful enough to seriously threaten to control the government. A party competing in an election only fulfills the third condition by proving the third condition false. Only a few extremist groups satisfy the first two conditions, but they can’t satisfy the third.

Yet in Biden’s utopian vision, equality and democracy are conflated. Or rather, by “democracy” he seems to mean a certain version of “equality” which aligns perfectly with the Democratic party’s policy objectives. But in a democracy, just because a party wants something doesn’t automatically make it so. They must first convince the people to vote for it. And, even if the people vote for it, that doesn’t necessarily mean it secures equal rights. Sometimes, laws are pesky obstacles to getting what we want, but that doesn’t justify ignoring them.

It runs against the foundation and spirit of America’s constitutional order to seek to overturn a fair and free election by extralegal means; President Biden is right about that.

But many other forms of lawlessness swing axes at the same tree. For instance, a chief executive could unilaterally forgive billions of dollars of (student) debt to benefit political allies, even though no laws give him authority to do so. Or he could unilaterally extend a (moratorium on eviction) policy violating private contracts and property rights, even after being told it was unlawful. Or he could refuse to fulfill responsibilities the law clearly requires of him, such as protecting the border. Or he could use federal law enforcement powers to shield political allies and harass political opponents instead of evenly and fairly enforcing the law. Or he could cast doubt on the legitimacy of an election before it happens, just because the opposing party is well situated to gain ground. Threats to “American democracy,” as expressed by the people’s constitutionally elected representatives in Congress — whose job it is to make laws — can come from both parties.

By far the most dangerous threat America’s system of popular government faces is the deliberate confusion over what is a threat. Labelling your opponents as opponents of democracy, simply because they seek to persuade voters to choose different candidates and different policies, is unacceptable. Voters should punish it severely.