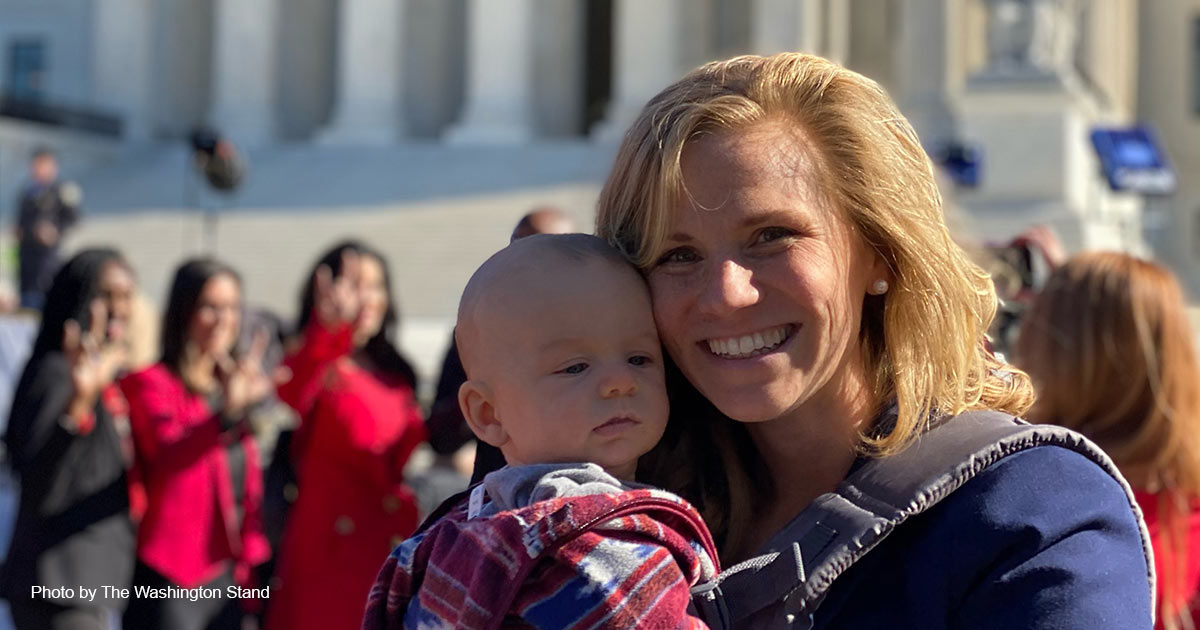 Career or Kids? FRC Chose Both

Since the Dobbs decision just four months ago, Americans have heard politicians, celebrities, and corporate CEOs argue that the overturning of Roe has signaled the end of the modern working woman. They claim that without a Supreme Court decision legalizing abortion through birth nationwide, women will not be able to graduate from college, win gold medals, or pursue their dream career. Their solution is to work for a country where an unborn child can be killed on her birthday and where a woman’s employer will pay to facilitate this tragedy.

As the director of the Center for Human Dignity at Family Research Council, I would like to offer a different solution to the new “problem” of 20 states valuing both women and their children.

Two years ago, I accepted a job at FRC. Three days later, my husband and I found out I was pregnant. We were surprised, thrilled, and scared.

I had so many questions — will people think I just took this job so I could go on maternity leave and then quit? Will they want me to quit? Can I be a good mom and do well in my job? Will I want to?

When I started showing just a few months later, I was forced to tell my colleagues my news. They were almost as excited as I was, and consistently prayed for my son’s safe arrival. A few days before his birth, my coworkers hosted a surprise baby shower complete with basketballs, balloons, and delicious treats. At that point, I had worked for FRC for eight and a half months — pregnant every single one of them — but I might as well have been family.

After spending a few months at home with my new baby, my boss and I discussed what coming back to work would look like. My son had an immune system issue that required extra attention, making a typical day in the office impossible. Still, FRC was committed to me prioritizing my family while producing quality work, and so, my boss got creative.

For the first year of my son’s life, I worked from home and came into the office or went to events on an as-needed basis. My hours weren’t the traditional 9 a.m. to 5 p.m. Instead, I worked 5 a.m. to 10 a.m., and then whenever my son was sleeping. When he was awake, I was a full-time mom — except, of course, when his awake time overlapped with an interview, testimony at a hearing, or speaking opportunity. When that happened, I relied on the fact that babies are adorable.

Sometimes, my workday took my baby and me on adventures to speak (or cry) in front of the Supreme Court. Sometimes, it took us to events at the U.S. Senate, where one senator commented that Joe’s whining fit right in. And sometimes, it meant I had to say no to opportunities because my son’s needs came first.

During that year, my schedule changed, and I am certain my work did, too. Frequently exhausted, my writing had significantly more typos and grammatical errors than I would have previously thought possible — thank goodness for editors! But I know, too, that being a mom changed the quality of my work for the better. After the birth of my son, I saw the world differently and more compassionately, and I worked harder because I was working to create a better future for my child.

Family Research Council didn’t view my son’s birth as the end of my career. Instead, they viewed it as an opportunity to utilize the unique gifts moms bring to the workplace. In a country where women are often presented with a choice — children or a career — FRC’s willingness to try something different is the envy of every mom I talk to at the park.

You see, the leaders of FRC don’t just promote Christian values — they live them. And one of these values is appreciating the gifts and talents of women in their totality — not just in their capacity to work on the same schedule as men.

I am truly blessed to work at FRC, but FRC’s willingness to allow me the opportunity to be a mom and have a career should not be unique. Certainly, working remotely long before the sun comes up does not translate easily to every job, but if the best solution to equally valuing men and women’s contributions in the workplace is to tell women that the company they work for will pay for their travel to kill their child and for women to act as if this is somehow empowering, there needs to be a change in strategy.

It’s time that women around the country stop accepting an economy built on the lie that human beings are made to live in service to the dollar. It’s time that women stop believing the lie that it is acceptable for their child’s life to be pitted against their success. Roe is gone, and with its overturn, corporations across America must transform the workplace into one that actually values and accepts women. Certainly, it will require creative solutions, but I’ve never met a mom who isn’t creative.