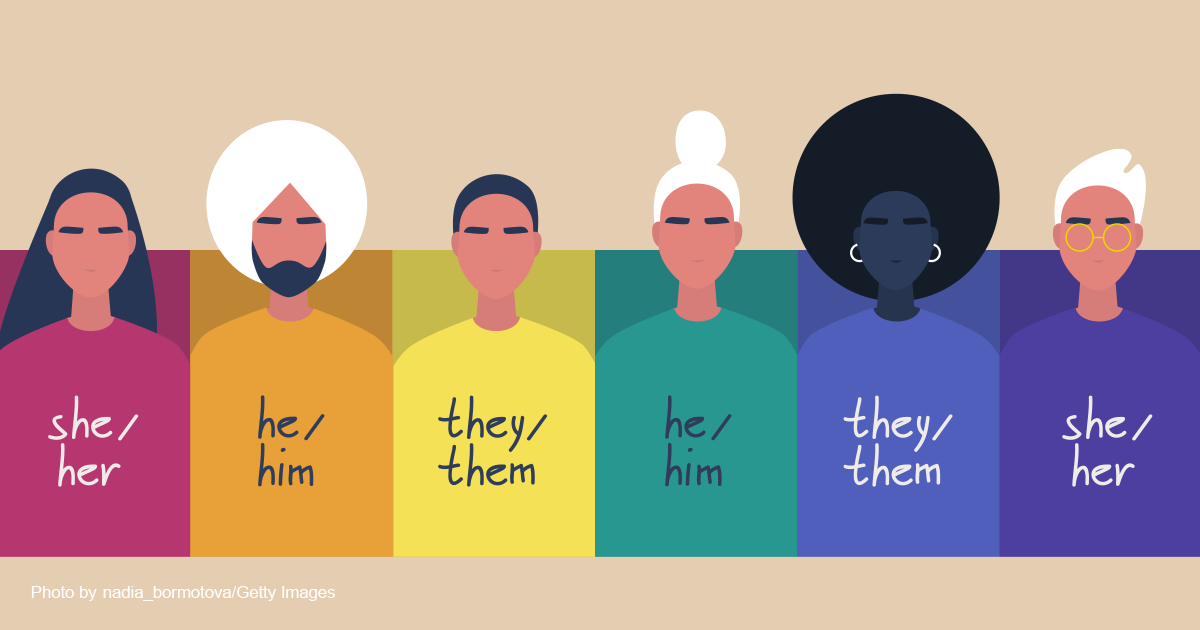 Do you have four minutes of your life to throw away? Do you have spare brain cells you want to kill off? Then watch this video, produced by the U.S. Navy — which means, produced by American taxpayers — on “proper” — that is, politically correct — gender pronouns.

“What is a pronoun?” these grown-ups ask seriously. What is this, a graduate level English seminar? But unlearn everything you’ve known since you first learned to talk, because everything you know about language is wrong, or something. And you have to believe them, because they’re wearing rainbow shirts.

Believe them at your peril, because their definition doesn’t even make sense. “A pronoun is how we identify ourselves, apart from our name, and it’s also how people refer to us in conversation,” says the nice lady. First, that’s not a definition; that statement answers the question, “How do we use a pronoun?” not, “What is a pronoun?” But I really don’t expect proper use of the pronoun “what” from inside that rainbow-colored, mental pea soup.

Second, her “definition” of pronoun contains five pronouns (we, ourselves, our, it, and us), indicating she understands that her audience already knows the answer. It also indicates she understands that pronouns are not arbitrary place holders, but that the correct pronoun is determined by the number, gender, and case of the noun it replaces, and that noun’s position in the sentence.

Third, for everyone who has effortlessly incorporated pronouns into his or her speech without contemplating its definition since grade school (in other words, normal people), a pronoun is a word used in place of a noun, not platform for self-expression.

According to this video — again, produced by a branch of the U.S. military — the way to create “a safe space for everybody” is not by projecting strength, nor by eliminating all the bad guys. It’s through using “inclusive language” (here they illustrate not with pronouns, because that would manifest the absurdity, but with gender-neutral nouns). They proceed to discuss how “we can show that we’re allies” — but it’s not by conducting joint naval drills with Estonia or South Korea. No, according to the U.S. Navy, we show we’re allies by including our pronouns in our emails, or advertising them when we introduce ourselves in a conversation.

The pressing questions the video considers are not, “How do we counter Chinese aggression in the Pacific?” or even, “How do we secure the homeland from foreign adversaries?” Rather, the pressing questions are, “What would I do if I misgender someone?”, “What do I do if I want to know someone’s gender identity or pronouns?”, and how to refute your libertarian uncle at a family barbeque. I feel safer already.

It’s nice to know the Navy is not one bit worried by Iran enriching enough uranium to build a nuclear weapon — no training videos needed on that front. Nor do they seem concerned that China is pursuing a “substantial expansion of its nuclear arsenal,” reportedly intercepted a ballistic missile in flight, or just launched a new, made-exclusively-in-China aircraft carrier. Clearly, they are so confident in America’s military superiority and readiness that they no longer need to focus on such banal concerns. After all, in the next major war, America will stand or fall based on how well those sailors know their pronouns — or, at least, that seems to be the U.S. Navy’s new theory of word-fare.