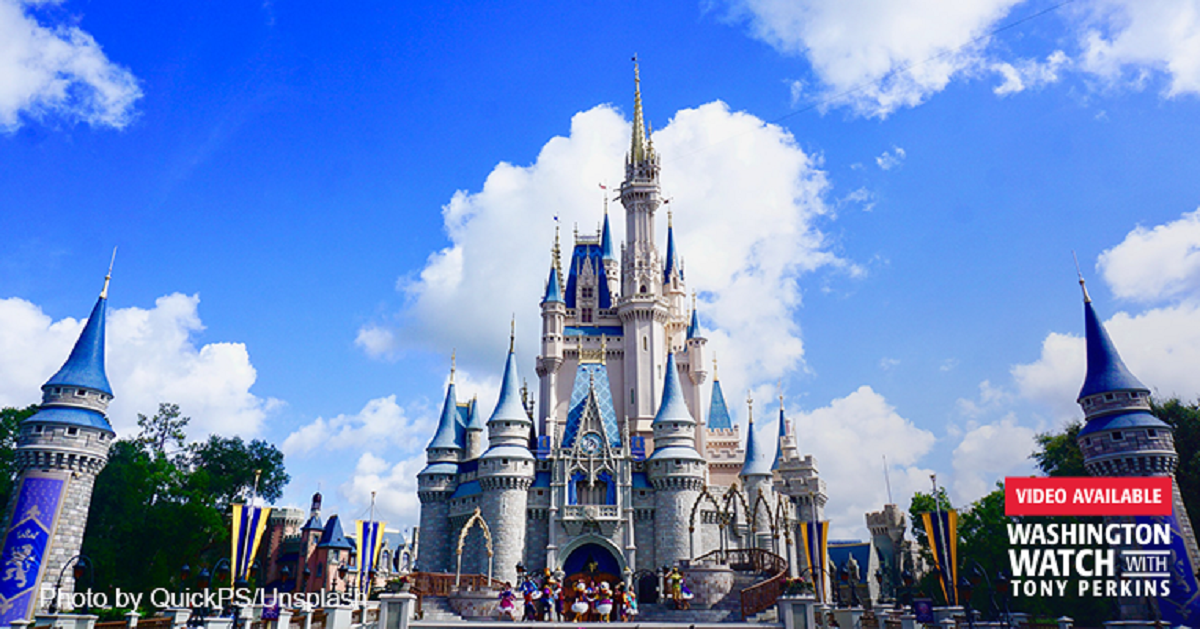 Disney’s Cinderella Story Comes to an End at Reedy Creek

For once, Disney has no comment. Bob Chapek’s company, whose loudmouth Leftists pushed the CEO into a losing war with Florida leaders, had nothing to say Friday when the governor pulled the plug on Disney’s sweetheart deal with the state. To most people’s surprise, the company that couldn’t keep its mouth shut on the state’s popular parental rights in education bill couldn’t find the words to respond to the GOP’s elimination of their autonomous district (after the Magic Kingdom tried to sprinkle fairy dust on public policy). “The entertainment giant has not commented publicly on the proposal to dissolve its government,” reporters point out — a dramatic shift from the outspokenness that got them into this mess. Has Disney learned its lesson? Don’t count on it.

The controversy that had everyone’s eyes glued to Florida isn’t over. While the chattering heads at Disney may be quiet now, the woke will regroup. And when they do, they’ll face a much more formidable foe: a conservative movement that’s emboldened, empowered, and riding an unprecedented grassroots wave. At the helm are leaders like Governor Ron DeSantis (R-Fla.), who never blinked at taking on the second largest employer in the state. “[Disney] demagogued the bill. They lied about it ... [But we] weren’t going to let that deter us,” he said at the bill signing that stripped Chapek of the company’s special tax, zoning, and self-governing status.

It was a turning point for Republicans in the state, who just this past year had fought to exempt Disney from other burdensome regulations in the state. Those, too, were overturned on Friday in a separate proposal that DeSantis signed, making Chapek subject to the state’s new Big Tech censorship rules. The carve out was part of the GOP’s effort to keep the Disney+ streaming service from being “caught up” in more oversight.

Friday, DeSantis called that special treatment a “mistake.” “The legislature has rectified that... and they have repealed the Disney exemption to our Big Tech bill. That’s important,” he argued, later pointing to all of the leaked videos where producers brag about “queering” content to indoctrinate children. “They’re talking about their intentional agenda to inject sexuality in the programming that’s provided to our youngest kids — kids of my age: five, four, and two ... That is just fundamentally wrong.”

Add that to the Stop Woke anti-CRT bill that DeSantis also signed Friday, and it was a bad day to be Bob Chapek. Not only will his company have to stop its “white privilege checklists“ for employees under that new law, but with the dissolvement of the Reedy Creek Improvement District, Disney is about to feel the pain that its over-the-top politicking has wrought. According to the Wall Street Journal‘s sources, Disney’s 55-year-old deal with state lawmakers had been saving it “tens of millions of dollars a year.” But if you’re “a corporation based in Burbank, California, and you’re going to marshal your economic might to attack the parents of my state? We view that as a provocation, and we are going to fight back,” DeSantis insisted.

The Journal’s editors, like so many watching this heavyweight battle unfold, believe there’s “a warning in here to other companies.” It’s the same warning that the Chamber of Commerce and other corporate extremists should have heeded before they bet the farm on the woke wars. “If they try to impose their cultural values, they risk losing Republican allies on the policy issues that matter most to their bottom lines, such as regulation, trade, taxation, antitrust and labor law. ... The Disney lesson for CEOs is to stay out of these divisive cultural fights. The lesson for political partisans in the workplace is that their bosses run the office, but they don’t run the country.”

And the party who is on the verge of running the country has a limited supply of patience for their former friends in Big Business, who seem to think they can bash conservatives for their social policy and still enjoy the benefits of the GOP’s tax and free-market favor. Those days, as DeSantis should have made clear to everyone, are over.

“These private businesses ought to mind to their own business and get out of picking up the agenda for the woke Left,” former Secretary of State Mike Pompeo told me on “Washington Watch.” It shouldn’t matter that a handful of employees signed petitions or letters or threatened to walk out, he argued. “They should tell them, ‘If you want to walk out for that, knock yourself out. Walk on out.’ They should do the things that they’re supposed to do to create prosperity and wealth. That’s the mission set. And when they don’t, those of us who have conservative beliefs should demand that they begin to change their ways.”

There was a day, not that long ago, when political conservatives and corporate America walked a common path. During my near-decade in office, I consistently had the highest rating with the premiere business organization, the Louisiana Business and Industry (LABI). But times have changed. Too many corporate CEOs are being held hostage by loud groups — inside and out — who are demanding that companies use their influence in the Left’s culture wars. Whether it’s a result of a Stockholm-type syndrome or an act of their own free will, these CEOs are about to get shocked back into reality. Shareholders invest for one reason: profits. When corporate profits decline, expect the tolerance of investors for this nonsense to slide downward as well.