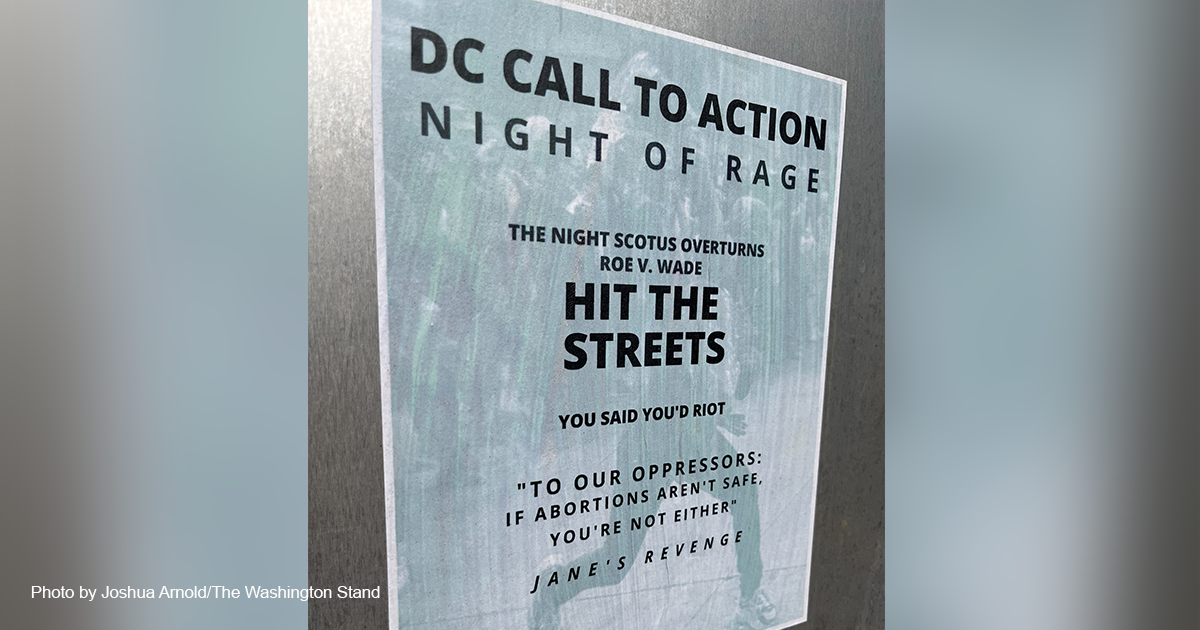 Morning dawned warm but breezy in a leafy, D.C. suburb this Saturday. The cul-de-sacs and manicured lawns — usually symbols of quiet peacefulness — were anything but, when children gathered outside Supreme Court Justice Amy Coney Barrett’s house not to play, but to protest. Police officers in bulletproof vests stood guard on the front lawn as a group of teenagers performed a bizarre spectacle outside the Barrett home.

A twitter account called “Rise Up 4 Abortion Rights” promoted the demonstration, in which the youthful activists in hideous costumes featuring fake blood and smeared makeup taped their wrists together and their mouths shut and carried baby dolls before them. The bevy carried signs reading, “Not Going Back” with a picture of a clothes hanger, and “Abortion on Demand without Apology.”

Beyond scaring the neighborhood pets, the protestors were clearly aimed at the Supreme Court’s pending Dobbs decision, which a draft leaked on May 2 indicated could overturn Roe v. Wade. “We’re calling on the pro-choice majority, on YOU, to get in the streets to STOP #SCOTUS from overturning Roe,” tweeted Rise Up 4 Abortion Rights.

The irony in their actions is that these girls are too young to remember the Great Recession, let alone a time before the Roe v. Wade decision, which turns 50 next year. They also presume to know more about the effects of childbearing on a career than Barrett, who has birthed five children (and adopted two) but has also risen to the highest rank of a competitive, demanding profession. If anything, they should be asking Barrett for advice about the plight they seem eager to force upon themselves. Barrett would likely tell them, “Save it for marriage.”

Saturday wasn’t the first protest outside Barrett’s home, nor is it likely to be the last. Activists demonstrated outside of both Barrett’s Virginia home and the Maryland home of Justice Brett Kavanaugh on June 9, after a man was arrested outside Kavanaugh’s home for plotting to assassinate him. A group called “Ruth Sent Us,” which previously published the home addresses of the justices, schedules weekly protests at the homes of each justice who signed on to the leaked draft opinion.

Such protests are illegal — or likely would be found so if anyone bothered to prosecute them — as even The Washington Post admits. According to Title 18, Chapter 73, § 1507:

Whoever, with the intent of interfering with, obstructing, or impeding the administration of justice, or with the intent of influencing any judge, juror, witness, or court officer, in the discharge of his duty, pickets or parades in or near a building housing a court of the United States, or in or near a building or residence occupied or used by such judge, juror, witness, or court officer, or with such intent uses any sound-truck or similar device or resorts to any other demonstration in or near any such building or residence, shall be fined not more than $5,000 or imprisoned not more than one year, or both. (Emphasis added)

But federal officers charged with enforcing this law have thus far failed to do so. Nor has any other jurisdiction arrested these protestors, although Virginia Governor Glenn Youngkin (R) has proposed a budget amendment that would allow the state to take action. Instead, Congress has been forced to consider a measure to expand law enforcement protection for immediate family members of Supreme Court justices, which passed the Senate unanimously and the House overwhelmingly (after a delay). On Friday, President Biden signed it into law. By spending extra on security instead of enforcing the law, the federal government has chosen to effectively subsidize these illegal protests.

Far from the leafy suburban cul-de-sacs, another pro-abortion protest committed illegal activity on June 13, but received no punishment. During the tumult of morning commuter traffic, pro-abortion protestors gathered in the very heart of Washington, near the U.S. Senate, the Supreme Court, and busy Union Station, blocking streets until 11 a.m. Obstructing streets is a form of disturbing the peace under D.C. city code. The declared purpose of the demonstration, organized by #ShutdownDC, was to blockade all roads leading to the Supreme Court garage. Police were out in force, not to arrest the demonstrators, but to conduct “rolling street closures” for them — one of the many ways our nation’s capital panders to lawless behavior. You can bet the extra police activity also cost the taxpayers.

In fact, a lack of accountability for pro-abortion violence and intimidation has been a major theme ever since the draft Dobbs opinion was leaked on May 2. After 52 attacks on pro-lifers in 46 days — including firebombing, graffiti, theft, and disrupting religious services — the FBI finally announced on Friday, June 17 that it “is investigating a series of attacks and threats targeting pregnancy resource centers and faith-based organizations across the country.” That provides small consolation to non-profit clinics who have been forced to pay for their own repairs or install extra security features because of the tepid response from the federal government. Every security camera a pregnancy center is forced to install represents dollars it can’t devote to providing diapers and parenting classes to mothers, free of charge.

The FBI’s announcement follows a second published manifesto from a group calling itself “Jane’s Revenge,” which claims credit for many of the attacks and threatens further violence. Speaking of further violence, over the weekend, posters were pasted all over Capitol Hill which read:

DC Call to Action
Night of Rage
The night SCOTUS overturns Roe v. Wade
Hit the streets
You said you’d riot
“To our oppressors:
If abortions aren’t safe, you’re not either”
Jane’s Revenge

Only blocks from the Supreme Court (and from the recently vandalized Capitol Hill pregnancy center), these posters, which contain language to incite a “riot,” deface public property in an area with some of the densest coverage of security cameras and law enforcement personnel in the country. Where is the law enforcement?

For comparison, on June 16, police in Prince George’s County, Maryland arrested a man for spray-painting the word “Groomer” on two public libraries on June 4 and June 9. Within 7-12 days, they learned his identity, arrested him, and have charged him with two counts of malicious destruction and multiple hate crimes. That’s how law enforcement works, when law enforcers want to. But, with orders of magnitude more intimidation, violence, and destruction of property against pro-lifers, police have made only one arrest — that we know about — of any pro-abortion activist, the would-be Kavanaugh assassin, and he called the cops on himself.

By all accounts, local law enforcement agencies have been supportive and helpful when clinics and churches are targeted; it’s the feds who are dragging their feet. For nearly two months, Jane’s Revenge has sought to incite violence and instill terror in those it hates. When will the FBI shut down Jane’s Revenge? When will the residences of Supreme Court justices be protected from intrusion and intimidation? When will all Americans enjoy equality under the law?