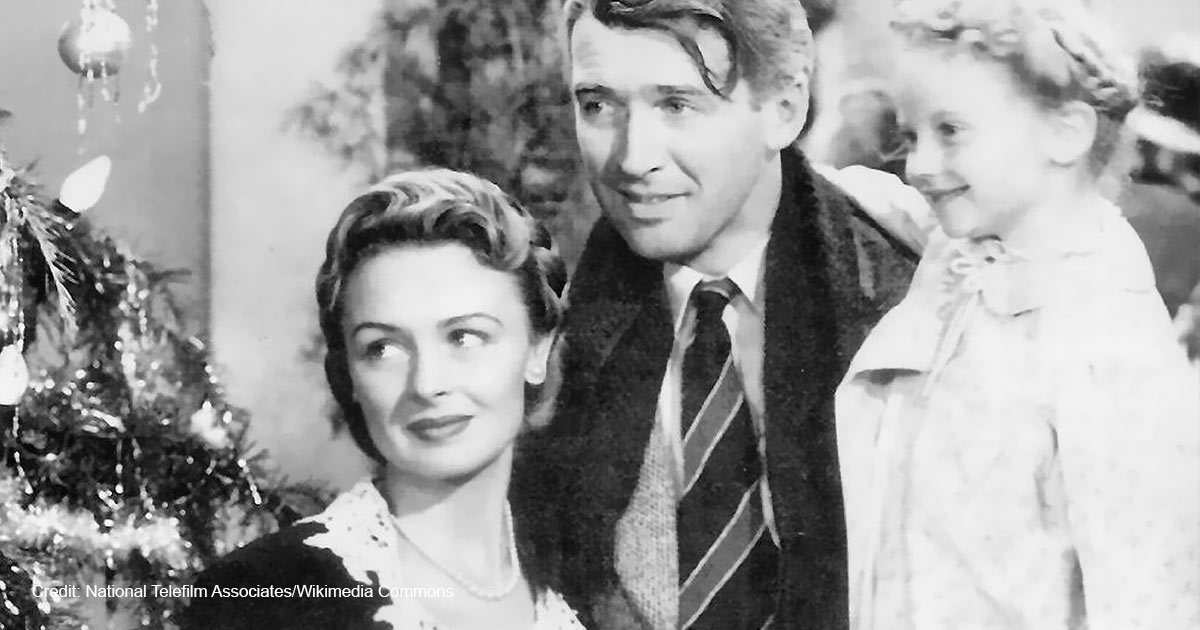 Hands down, the Christmas classic “It’s a Wonderful Life” is one of my top five favorite films. Featuring the iconic Jimmy Stewart, the movie portrays the main character George Bailey who runs Bailey Brothers Building and Loan.

After his Uncle Billy loses an $8,000 deposit on Christmas Eve of 1945, George realizes criminal charges are imminent with the bank examiner in town. George eventually wanders to a bridge on the edge of town where he contemplates taking his life by jumping into the icy water below. It is here where George encounters an angel, Clarence Odbody, who helps George realize just how wonderful his life really is. But what many viewers don’t realize is that much of Jimmy Stewart’s acting, particularly scenes where he is crying or angry, are actually real feelings that the actor experienced from the wounds of World War II.

Jimmy Stewart rose to fame as an actor in the late 1930s and early 1940s, earning an Academy Award for best actor in 1941 for his role in “The Philadelphia Story.” He had also gained fame for his 1939 role in “Mr. Smith Goes to Washington,” where he portrayed a principled citizen who took on political corruption when appointed to the U.S. Senate.

Amidst the growing conflict of World War II, Stewart felt called to put his acting career on pause and enlist in the U.S. Army, the first major American movie star to do so. Asked why he was leaving his acting career, Stewart replied, “This country’s conscience is bigger than all the studios in Hollywood put together, and the time will come when we’ll have to fight.” An experienced pilot, Stewart was commissioned a 2nd Lieutenant in the U.S. Army Air Corps in 1942. Due to his broad popularity with the American public, he was kept stateside, assigned to star in recruiting films and host rallies for the war department. Instead of fighting, he was tasked with training other pilots who were later sent overseas. He also appeared in “Winning Your Wings,” a short film aimed at recruiting more airmen, in 1942. After appearing in theaters nationwide, the film resulted in 150,000 new recruits.

Stewart wasn’t at all satisfied with his role and believed he was being favored because of his celebrity status. He longed to fight overseas. After appealing to his commanding officer, he was reluctantly transferred to England as a flight leader in 1943. Stewart was promoted to Major after a successful mission in Germany in early 1944 and to Colonel the next year, becoming one of the few Americans to rise from private to colonel in such a short time. Throughout his time overseas, his commanding officers repeatedly tried to keep him out of combat; but Stewart was determined to serve his country just like everyone else. For the next 18 months, he flew B-24 Liberator bombers over Germany. In all his service, Stewart flew 20 combat missions that he rarely talked about after the war, a likely indication of the carnage he witnessed.

Biographer Robert Matzen states that Stewart’s most challenging mission was in 1944 over the German town of Gotha. Stewart lost many of his men during that campaign, which likely took a heavy toll on him as flight leader. To compound this experience, Stewart’s plane was hit during the mission, blowing a hole just under his feet. He managed to make it back to base in England, but likely experienced temperatures of at least 20 degrees below zero while gazing down at enemy territory below.

In 1945, Stewart returned home; but he was a changed man. In the final months of the war, Stewart was no longer allowed to fly due to what we now know as post-traumatic stress disorder (PTSD). At the time, PTSD was not recognized as a psychological disorder and was often referred to as “shell-shock” or “combat fatigue.” Stewart was sickly and had lost a significant amount of weight. He rarely slept, often having recurring nightmares of the carnage he had seen in the war. He also experienced tremors and vast mood swings that would sometimes result in fits of rage. Stewart refused to discuss his experiences, and it looked as if his acting career was over.

In 1946, Stewart was offered the main role of George Bailey in “It’s a Wonderful Life,” his only other offer being a film highlighting his wartime career. After his encounter with Clarence the angel and seeing what life would be like without him, Stewart returns to the bridge where he had contemplated suicide earlier that night and prays to God, “Dear Father in heaven, I’m not a praying man but if you’re up there and you can hear me, show me the way. I’m at the end of my rope. Show me the way.” In a 1987 interview, Stewart admitted, “As I said those words, I felt the loneliness, the hopelessness of people who had nowhere to turn, and my eyes filled with tears. I broke down sobbing.” The scene was so compelling that it was done in one take.

In another scene, Bailey yells at his family and destroys part of the living room, a fit not unlike those he experienced as a result of his PTSD. Despite his inner turmoil, Stewart said acting in the movie was therapeutic for him. He went on to become one of the most accomplished and beloved actors in American history. He was also awarded the Presidential Medal of Freedom by President Reagan in 1985.

Interestingly, the film was initially a flop, not even earning enough to cover production costs. Some thought it was the end of producer Frank Capra’s successful career. After the film’s copyright lapsed, broadcasters were able to air the movie for free, flooding the airways at Christmastime. A tradition was quickly born. NBC eventually acquired the rights to the film and has aired the beloved movie every Christmas Eve for several decades now. In 2016, an estimated 4.5 million Americans watched the beloved film from their living rooms on Christmas Eve.

The beautiful message behind “It’s a Wonderful Life” is that everyone has a unique purpose in life. After Uncle Billy loses the $8,000 deposit to the sinister Henry Potter, who owns most of Bedford Falls, George berates him after fruitlessly retracing their steps. George takes out his frustration on his wife, Mary, and their children and then begs Potter for a loan. Potter refuses and calls the police. George gets drunk at a bar and eventually wanders to the bridge where he contemplates suicide. But Clarence dives into the river first so George has to jump in to save him.

When George wishes he had never been born, Clarence takes him through a world without him. Bedford Falls is instead called Pottersville, the entire town now owned by the sinister Potter. The town is overrun with bars, adult clubs, crime, and everything but a family atmosphere. George encounters the pharmacist, Mr. Gower, who had been imprisoned for poisoning a prescription because George was not there to stop him as a child. George’s mother doesn’t know him, and Uncle Billy is institutionalized after the Building and Loan company failed. George finds his beloved Bailey Park, which he had designed to help low-income families find housing, is a cemetery. While there, he finds his brother Harry’s grave because he wasn’t there to save Harry years before when he fell through the ice and drowned. Because George wasn’t there to save Harry, Harry never became the decorated hero from World War II; and his crewmen were killed on a transport ship. Mary never marries and works as a librarian. She doesn’t know George when he approaches her, screams for the police, and runs home.

At this point in the film, George races back to the bridge and begs Clarence for his life back, regardless of the consequences he will face. When his policeman friend Burt approaches, George realizes things are back to normal and races home to await his arrest. Unbeknownst to him, Mary and Uncle Billy have rallied George’s friends in Bedford Falls to raise more than enough to cover the missing $8,000. His brother Harry arrives and toasts George as “the richest man in town.” Along with all the donations, George finds a copy of “The Adventures of Tom Sawyer,” the book Clarence had been reading when George rescued him from the river. In the front cover, Clarence wrote a note to George: “Dear George, Remember no man is a failure who has friends. Thanks for the wings. Love, Clarence.” A gust of wind comes through a raised window and rings a bell ornament on the Christmas tree. George’s daughter Zuzu exclaims that “every time a bell rings, an angel gets his wings.” The movie concludes with George realizing just how rich he really is with the friends and family God has blessed him with.

Whether or not the producers intended, “It’s a Wonderful Life” teaches a powerful biblical lesson — every life matters. Each human being was uniquely created by God in His image for a distinct purpose that only that one person can accomplish.

So this Christmas season, if you are discouraged or depressed, know that you are deeply loved. There is always someone who loves and looks up to you. And if you can’t think of anyone, know that Jesus does. He sent His one and only Son to be born in the humblest of circumstances for a king. He lived a short life and then died in the most humiliating of circumstances just for you.

No matter what you have done, you are never beyond the reach of God’s amazing grace. Suicide is never the answer to your problems — Jesus is. So run into His arms this Christmas season, accept His free gift of salvation, and find all the blessings He has for you — just like George Bailey did.