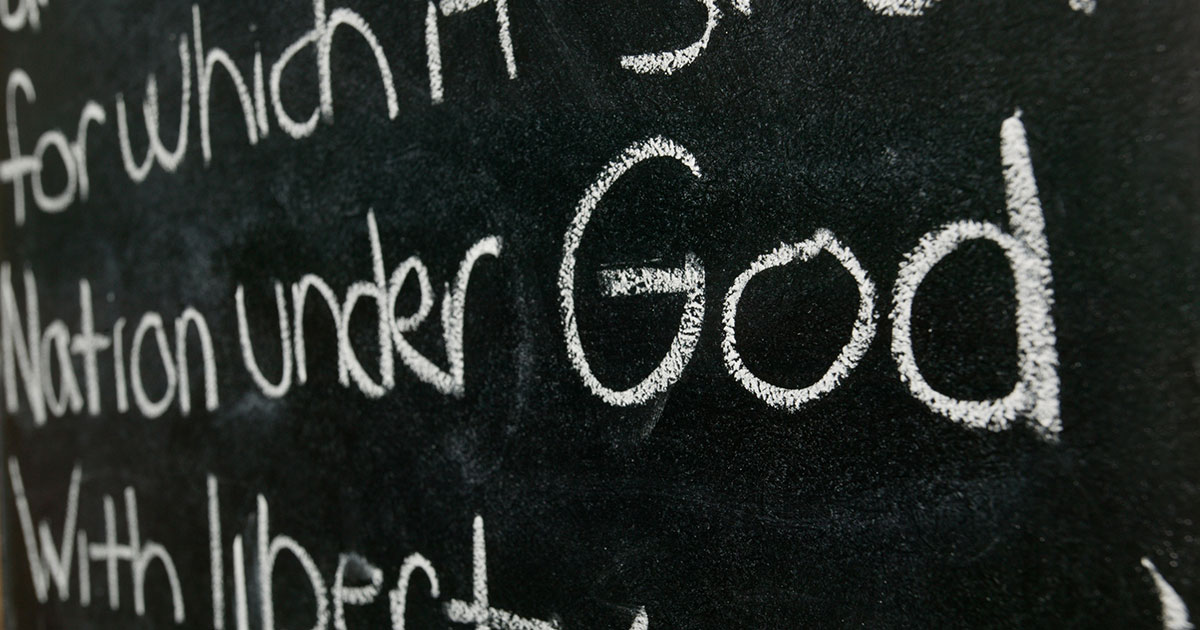 The Fargo, North Dakota School Board voted 7-2 at a Tuesday meeting to not recite the Pledge of Allegiance at upcoming school board meetings. School Board Vice President Seth Holden argued at the meeting that reciting the Pledge was a “non-inclusionary act,” excluding atheists, agnostics, and adherents of many religions because of the words “under God.”

The vote rescinded a motion to recite the Pledge that the Fargo School Board had passed 6-2 during its March 22 meeting. In that meeting, Holden also objected to the Pledge of Allegiance. “There are words in the Pledge of Allegiance that I don’t think are true,” said Holden. “Not every single person in this country has liberty and justice,” he claimed, echoing a common argument of critical race theory.

How does a school board go from overwhelmingly affirming the Pledge of Allegiance to overwhelmingly rejecting it, in less than five months? Local elections have consequences. Five out of nine seats on the Fargo School board were up for election in June (members serve four-year terms), and only one incumbent was re-elected. The local teachers’ union, the Fargo Education Association (FEA), endorsed a slate of five challengers who they said would bring positive change to the community, and four of the teachers’ union-endorsed candidates won seats on the school board.

All four victorious candidates endorsed by the teachers’ union voted not to recite the Pledge of Allegiance.

Holden zeroed in on the capitalization of the word “God” in the Pledge at the August 9 meeting. “Given that the word ‘God’ in the text of the Pledge of Allegiance is capitalized, the text is clearly referring to the Judeo-Christian God, and therefore, it does not include any other faith such as Islam, Hinduism, Buddhism, all of which are practiced by our staff and students at FPS,” he said. His argument is surprising, and I wouldn’t assume adherents of other religions necessarily accept it (would Muslims object to capitalizing “God,” for instance?). Perhaps most strikingly, he appeals to an unspoken grammatical distinction as the basis for objecting to a spoken pledge. Seriously, who thinks, while reciting the Pledge of Allegiance, “now, I’ve got to make sure I pronounce “God” with a capital “G,” not “god” with a lowercase “g.”

The sheer pettiness of this argument may indicate that the capital-“G” God is not the real reason for Holden’s opposing the Pledge of Allegiance. I don’t know for certain, but it’s likely Holden objects to the Pledge including God’s name at all. First, Holden seems to hold a leftist ideology that interprets the separation of church and state to require a total exclusion of religion from civic life. Second, it enables him to play to a larger political base. Adherents of non-Christian religions comprise a slim fraction of the Fargo-area population (1.2% in 2010), but there are between 30 and 40 times more people who profess no religious affiliation (40.5%). Mainline Protestants, evangelicals, and Catholics are still a majority (58.3%).

Whatever the motivations of the seven Fargo School Board members who voted to ditch the Pledge of Allegiance, or the members of the teachers’ union that got many of the elected, what this incident makes clear is that there are still some elected officials in America who are openly hostile to even the most banal forms of religion in public life, specifically references to the Christian God. Religious intolerance toward Christians remains a clear and present danger, even where Christians remain a majority of the population, and even in areas that are supposedly conservative.

Of course, if you’re a longtime follower of The Washington Stand or Family Research Council, you’re used to hearing appeals for parents to step up and take action, run for school boards themselves or support others who do, as a way to push back against the woke propaganda ruining our public schools. That’s certainly true, but that doesn’t make it easy.

In fact, Fargo parents, angered by a school mask mandate, mounted a campaign in 2021 to recall the four school board members not up for reelection until 2024. Their signature collection drive met the minimum threshold, but not enough signatures were validated by the school district’s business manager, so the effort failed. Then, it seems, the teachers’ union went on offense in the 2022 elections and almost ran the tables. Fargo parents face an uphill battle against a well-organized, deeply-entrenched opponent who is already flush with victory.

But difficult is not the same thing as impossible. Roe v. Wade also looked invulnerable for decades — before it suddenly came crashing down. Parents can win, but they should be clear-eyed about what it will require to do so. Sometimes, it will take years of dedication, coalition-building, advocacy, and education. They should expect teachers’ unions to fight back, but they shouldn’t expect teachers’ unions will always win.