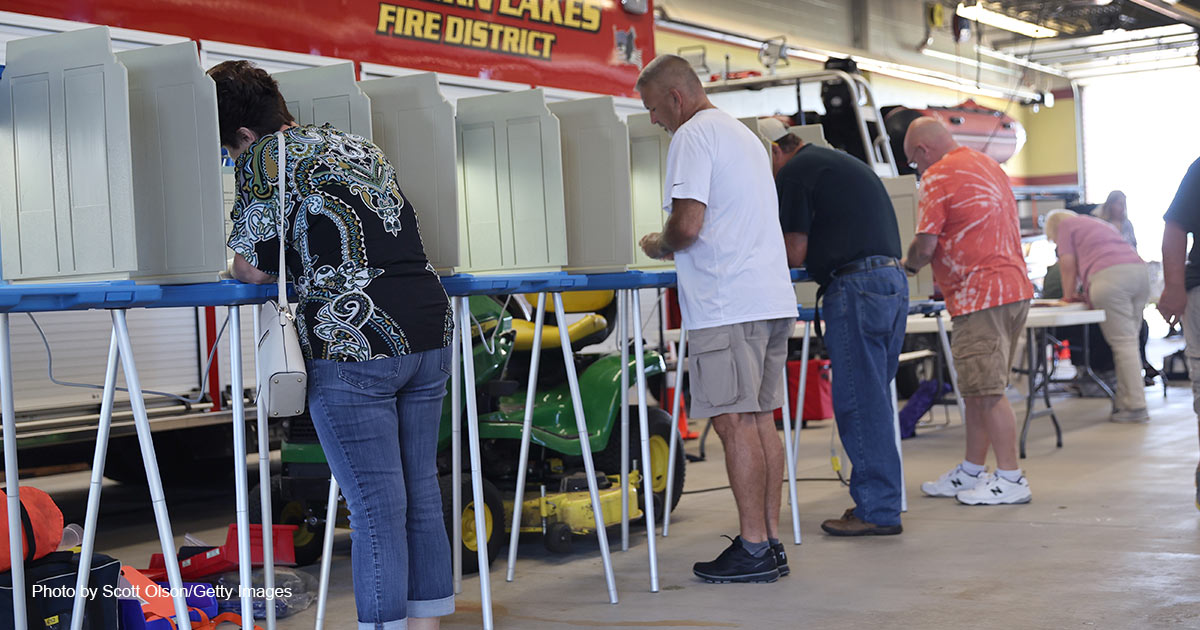 Have you ever imagined a lion that’s scared of its own roar? It petrifies its prey, but instead capturing the moment — and its dinner — it turns tail and runs. That’s the position the Republican Party finds itself in, only weeks away from the beginning of early voting in the 2022 midterm elections.

By historical precedent, Republicans were well-situated to score major wins in this presidential election. Opposition parties who control neither the White House nor Congress almost always gain ground in Congress during midterm elections. Historically unpopular President Joe Biden has been an albatross around his party’s neck, having presided over two major foreign policy disasters and a constant string of domestic crises, including mounting inflation. Republicans even led in Real Clear Politics’ generic congressional ballot (a measure which skews toward Democrats) since November 2021 by as much as five points.

Then, the Supreme Court released its Dobbs decision, overturning Roe v. Wade and returning control over abortion policy to the people’s elected representatives.

The people’s elected representatives — the Republicans, at least — balked. This was a historic moment, the culmination of 50 years of coalition building, marching, campaigning, public persuasion, and prayer. Wasn’t this the hard-fought victory pro-lifers sought to achieve? Did pro-lifers campaign 50 years to return control of abortion to elected officials, only for those officials to sit on their hands? While some did celebrate, for many, the reply was muted. “There’s just been mostly radio silence,” said Connor Semelsberger, FRC’s director of Federal Affairs. “There really isn’t a unified message.” What happened?

Part of the problem is that Republicans listened to what the media was saying. (Not every Republican, of course. Washington Watch host Joseph Backholm noted that “there are undoubtedly some really confident, loud, courageous pro-life voices.”) The propaganda wing of the Democrat party has blasted out the message, “all Republicans want to do is throw women in jail, and criminalize doctors, and the whole nine,” Semelsberger summarized. But he noted, “that’s just the furthest thing from the truth.”

But can Republicans convince the public? “Everybody knows,” said Backholm, “what Democrats think about abortion, right? On demand, taxpayers pay for it, no co-pays, no nothing, nine months of pregnancy, maybe even a couple of days later. … Do we know that the Republican position on abortion is?”

Semelsberger said groups like FRC “have been trying to get these pro-life elected leaders to really lean into the issue rather than away. … The danger there is, you let the Democrats frame the debate.”

Democrats are eager to do so. D.C. Democrats are “trying to propel people to really care about abortion,” continued Semelsberger. They “have all their congressional incumbents talk about the abortion issue and their governor’s candidates talk about the abortion issue. Because they’re reading into certain special elections or some random statewide elections that they think show, ‘Hey, let’s keep talking about abortion.’” In a midterm election, where base mobilization is important, this emphasis could make elected Democrats even more extreme on abortion.

Democrats are confident. “Republicans should be very, very, very scared this morning about their prospects. I have never believed that we would not hold the House,” said House Speaker Nancy Pelosi. That might be a bit far-fetched, with even the left-leaning number crunchers at Five Thirty-Eight predicting Democrats’ odds of winning the U.S. House are only 22 out of 100. The Senate is another story, where Democrats hold onto power by their fingernails but are likely to make gains; weak Republican nominees like Pennsylvania’s Dr. Mehmet Oz — not pro-life, not conservative, not Republican until 15 minutes ago — are hurting Republican chances.

If Democrats do improve their majorities in Congress, America will pay the price. Every progressive priority narrowly confounded over the past 18 months will suddenly be rammed through — possibly in a single bill. Without having to run everything by the slightly-less-progressive Senator Joe Manchin, (D-W.Va.), Democrats can consider passing the (in)Equality Act, the rest of the inflation-fanning Build Back Better, their election takeover bill, court packing, registering women in the draft. They may even codify abortion-on-demand until birth.

But Semelsberger is confident, too. “My advice to Democrats would be to make this election all about abortion, because I just don’t think it’s going to be the salient issue that they want it to be.” He pointed to “the Summer of Rage,” the long-promised rioting over abortion that “just never materialized.” Plus, voters have plenty of other things to care about, what with rising food prices, Biden’s lawless student loan forgiveness, and other administration missteps.

But Republicans — both those running for office and those running the party — must step up their game. Semelsberger urged them to give “pro-life Americans that have been fighting for 50 years” something to vote for. These hardworking Americans want “to finally pass laws to protect life. They finally have their opportunity to elect leaders that can actually protect life in the womb. They, too, want to turn out and vote for candidates that they know protect life. But there has to be leadership.”

Backholm agreed, “At least say, ‘Here’s our agenda: we want to ban all abortion [after] 15 weeks,’ which polling says Americans would support. You could even get back to six weeks, a heartbeat [bill], and there’s evidence to think a majority of Americans would support that. But when you’re silent on the issue, … the abortion lobby comes in and says, ‘Oh, all they want to do is throw women in prison if they have an ectopic pregnancy.’” Absurdity of absurdities.

In the hit musical that bears his name, Alexander Hamilton raps, “If you stand for nothin’, Burr, what’ll you fall for?” In recent years, the Republican party has come to stand for protecting unborn life, standing up for parents’ rights, and guaranteeing religious freedom for all. In doing so, it had to tune out the relentless criticisms of the unfriendly press, and voters rewarded them. Now, on the cusp of victory, some Republicans seem to be contemplating discarding these principles for ones more palatable to their erstwhile foes.

They should heed the counsel from one of their own, Sen. Tim Scott (R-S.C.), “I don’t believe that [the overturn of Roe] will have a negative impact on us at the polls.” Listen to your voters, not your adversaries. The reason why the 2022 midterm no longer appears to be a slam-dunk victory for Republicans is that they stumbled over thin air on the way to the basket, and nearly lost possession of the principles that got them there in the first place.

When will the lion learn that its paws and teeth are as strong as its roar? Public opinion, momentum, law, and justice are on the side of protecting unborn life. What else are Republicans waiting for?