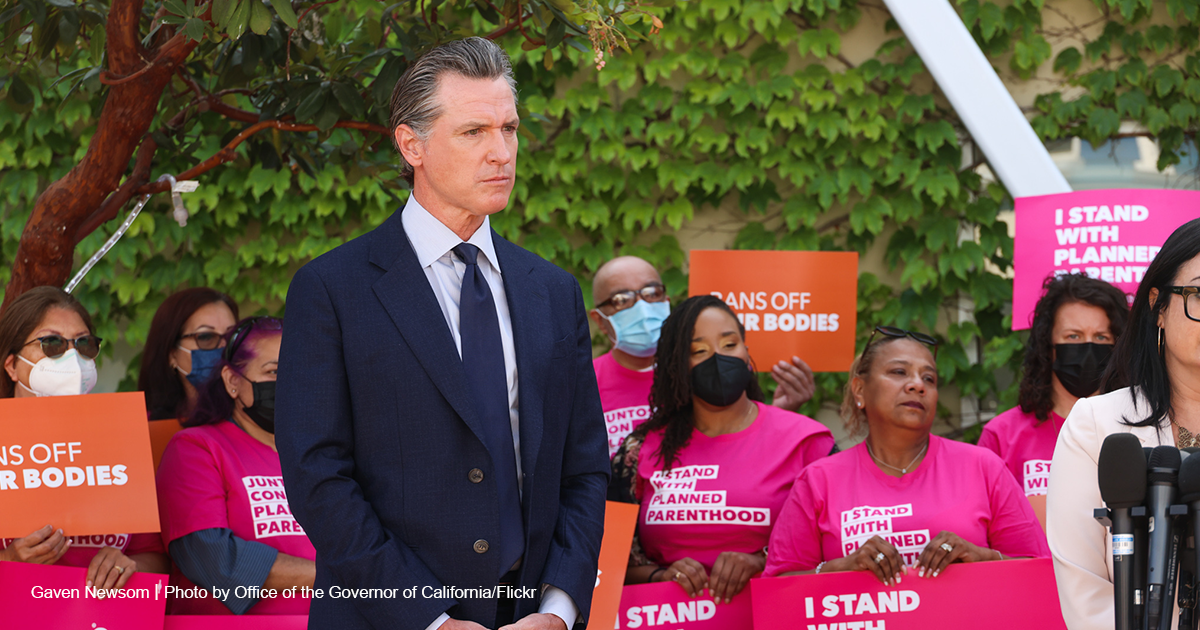 California Governor Gavin Newsom (D) wants to make sure you know how much he approves of abortion. Yesterday he announced $57 million in state funding to promote abortion — on top of $68 million he announced in January. The package includes $40 million to abort babies of low-income women, $15 million to subsidize pro-abortion activism, and $1 million each to maintain an abortion website and to research other avenues to bankroll the abortion industry.

In light of a bill sailing through the legislature (so far it has passed three Senate committees with a combined vote of 23-3), Newsom’s announcement amounts to sponsoring abortion tourism. Under Senate Bill 1142 (which has sailed through), the state’s Commission on the Status of Women and Girls (can you define those terms, please?) would administer an Abortion Practical Support Fund which accepts any and all donations to sponsor abortion — essentially a GoFundMe campaign — which is partly targeted at patients who “come from out of state.” The bill also provides for state-sponsored advertisements about how to obtain an abortion (as if anyone doesn’t know) and explicitly “declares” that “abortion care is a constitutional right.”

Governor Newsom’s funding and SB 1142 are part of a blizzard of pro-abortion bills sweeping through California’s legislature. In March, Newsom signed into law SB 245, which eliminates insurance copays for abortions. Also scoring huge committee wins (18-5 so far) is Assembly Bill 2223, which would decriminalize “actions or omissions with respect to … perinatal death [aka after the child is born] due to a pregnancy-related cause,” which blurs the line with infanticide if not outright permitting it. California Family Policy Council keeps an extensive list of the most concerning bills (on abortion and other issues), which includes:

Do elected officials in Sacramento have nothing better to do than sit around and think up ways to kill other people’s unborn children? Not quite. It turns out Governor Newsom outsourced that distasteful responsibility to the California Future of Abortion (FAB) Council, a cabal of over 40 abortion industry advocates, including eight Planned Parenthood affiliates, which gave the state government “45 policy recommendations relating to 7 main areas of focus.” It seems that this sudden rash of bills is simply the state giving the abortion lobby everything they asked for.

Why is California’s government so zealous for abortion? In part, California is responding to anticipation of the Supreme Court’s decision in Dobbs, which may overturn Roe v. Wade and return abortion policy back to the states, according to a draft opinion leaked last week. But it’s more than that. Governor Newsom has endorsed abortion tourism for much longer; all the way back in the misty, pre-COVID past of 2019, he signed a proclamation “welcoming women to California” for abortions. Additionally, the FAB Council’s report and Newsom’s January budget were both released before the draft Dobbs opinion was leaked. At some point, we simply must conclude that California Democrats want more babies aborted. Leftists like to complain about greedy corporations getting sweet deals from the government at the expense of the general public; that’s exactly what’s happening in California with abortion businesses.

Perhaps the most disturbing aspect of California’s quasi-religious extremism is the religious undertone. “We’ll be a sanctuary,” promised Newsom — that is, a place that is safe because it is sacred. But safe for whom, or rather for what? Certainly not for the unborn babies whose lives are ended, nor for the mothers who face crushing guilt and often life-threatening complications. Only the right to end a baby’s life, a staple of demonic cults for millennia, is protected by this sinister “sanctuary.” When the draft opinion was leaked, Newsom declared, “we are going to fight like hell,” but what he meant as an expletive is quite literally true.

God blessed Adam and Eve by commanding them, “be fruitful and multiply” (Genesis 1:28), and all Scripture reaffirms that “the fruit of the womb [is] a reward” (Psalm 127:3). Yet today many people are desperate to extinguish their offspring to avoid the natural consequences of their sexual immorality. The consequences — children — are good gifts from God. “Let the children come to me,” said Jesus; “do not hinder them, for to such belongs the kingdom of God” (Mark 10:14). California has distinguished itself as a leader in hindering the children from living at all, and that will bring its own consequences.