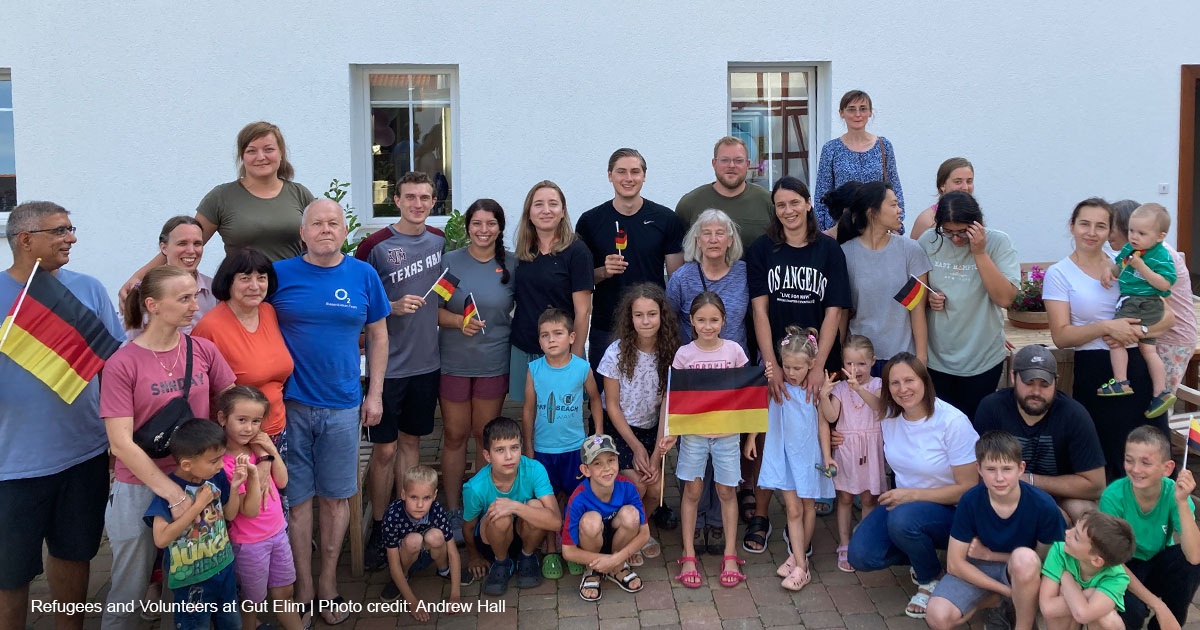 Gut Elim: A Haven of Hope for Ukraine

The war in Ukraine continues to escalate despite declining media coverage. Cities are still being bombed, families are still fleeing, and men — both young and old — are still fighting for their country.

Recently, I visited Gut Elim, a community hidden in the green German countryside within the small town of Bad Wildungen. Gut Elim is owned and operated by Christians in the Lord’s Recovery, a network of local churches across the globe, and it has become a center for Ukrainian refugees fleeing the war. Gut Elim received its first bus load of refugees in March and offers housing, food, clothing, medical care, and assistance for finding jobs and applying for visas. Most of the refugees are Christians either from one of the local churches in Ukraine or from other denominations.

‘The Center of God’s Move on the Earth’

One of the full-time workers at Gut Elim who has been living there since March, explained that Gut Elim is essentially a distribution center to temporarily house Ukrainian refugees before sending them to other localities throughout Germany and the rest of Europe for a more permanent residency.

Indeed, Gut Elim is a special place. The 120-acre property has six historic German buildings, red brick roads, and farmland maintained by a community of Christians from the United States, Europe, Russia, and Ukraine. I knew no one before arriving, but after a couple days of working on the property and enjoying meals and many rounds of volleyball together in the evenings, I could see the genuine love and care from both the volunteers and the refugees. It was a beautiful display of the body of Christ, with each member functioning to build up the body in love, and the family of God, where there is no Jew nor Greek, nor slave nor free, nor German nor Ukrainian, but the same Christ in each of the saints.

In the past two months, over 50 volunteers have served at Gut Elim, and there were 23 currently serving at the beginning of August. Most volunteers are temporary and stay for periods as little as two weeks to as long as three months due to government visa restrictions. Gut Elim has welcomed everyone with a hunger to serve: plumbers, electricians, and construction workers with much-needed technical skills, translators who can speak Russian or Ukrainian, entire families, and others who have never been overseas. They have an entire kitchen crew of volunteers to prepare three meals every day for hundreds of people each week.

The Difficult Plight of Ukrainian Refugees

In addition to meeting the refugees’ physical needs, Gut Elim also strives to give the refugees a sense of ownership and purpose during their stay. “We really want to get them as involved as possible by being busy and not just sitting around reading the news and worrying about if their husband was going to make it,” one worker said. “When [the refugees] are not busy, they really struggle.”

Nearly all the refugees are women and children, since the Ukrainian government passed a sex-selective martial law banning all men between the ages of 18 and 60 from leaving the country. Many families were forced to leave behind fathers, husbands, brothers, and sons isolated in their homeland. Some of the men have died in the war, but many are still alive and are able to communicate by phone with their loved ones.

With the help of a translator, I talked with one Ukrainian mother who escaped with her two-year-old son. “I was living in a small village working in a school as a nurse,” she shared. “There was a wonderful church life. My child was in kindergarten, I was working, and everything was going well.”

While she and her family suspected a war might break out, it was devastating nonetheless.

“When I heard about the war, I was shocked. I knew that it would happen, but until the last moment I had hope that it might not. I thought I might be able to stay, but then I realized I had to leave. My husband told me to take our son and go and that the Lord will take care of [us]. We didn’t want to go because we just got married not long ago. Everything was so good.”

Leaving family behind is just one of the challenges the refugees face. Many arrive with mental trauma and immediate health needs. Overcoming the language barrier is among the most difficult hurdles, especially for Ukrainians who lack the multilingualism of their European neighbors. Most of the refugees speak primarily Ukrainian and some Russian, and very few know German or English.

On top of that, dissenting political views among Ukrainians discourage unity. Ukraine’s language policy has been a highly politicized issue since 2012 when the country passed a bill declaring Russian as an official regional language. Ukraine eventually passed a law in 2019 under President Petro Poroshenko mandating Ukrainian fluency for government workers, doctors, and teachers. Some argue that Russian speakers are being marginalized in Ukraine because of similar policies, while others view the Russian language as a threat to Ukraine’s national identity and independence from Russia. Loving their brothers and sisters in Christ despite hostile viewpoints that have been aggravated by the war has proved to be challenging for many of the refugees.

The team serving at Gut Elim has also had its share of obstacles to overcome. There are few permanent volunteers and even fewer people who are fluent in English, German, and Ukrainian, and the inflow of refugees comes in unpredictable waves. Gut Elim relies fully on donations, and at times finances grow sparse.

German law also adds extra burdens. The 400 and 500-year-old buildings must meet strict government standards and keep the historic German architecture, and Gut Elim has a small number of skilled laborers. The German government’s processing of refugees for visas, financial aid, and reimbursements is slow and constantly in flux, adding to the complexities, and many businesses are unwilling to lend or rent to refugees.

Despite the challenges, Gut Elim overflows with hope. Gatherings for singing, prayer, and fellowship fill the halls throughout the week, and children playing and laughing together is common. One of my favorite moments was attending a Sunday meeting where we sang hymns together in Russian, English, and German and shared testimonies of the Lord’s faithfulness and love during these times. Despite the vast differences among the congregation, the unique, uniting bond of peace that only the Spirit can provide was present.

The refugees have also made Gut Elim their home. They have participated in renovating buildings, serving meals, cultivating crops, and a host of other projects at the property. Sometimes they meet new people in the surrounding community who become open to the Lord and the community there.

‘Time Is Short and the Workers are Few’

This wonderful light of Gut Elim, however, is in stark contrast to the increasingly dark situation in Ukraine.

“The war is getting worse in Ukraine,” Stone said. “Cities will continue to get bombed. These are our brothers and sisters that are suffering and being killed. Their suffering is our suffering. They are fellow members of the body, and when they are suffering, we are suffering.”

When I asked the volunteers and refugees at Gut Elim how Christians back in the states could help, they shared several ways to get involved. Prayer was a common request — prayer for the men still stuck in Ukraine, that the Lord would strengthen them and keep them safe; prayer for the refugees, that they would be able to spread the gospel and find permanent places to live; and prayer for Gut Elim, that they would be able to receive and care for more refugees.

They also shared that they greatly appreciate volunteers who come to serve, even if it is only for one or two weeks. They are currently offering gospel trips at the end of October for those who want to get involved. Financial support is another practical way to help with food, clothing, and property renovations.

A volunteer from Irving, Texas echoed the need for resources. “With the current situation in Ukraine, it changes every single week. One minute everything is fine, the next another country joins with Russia, and this will send waves of people over. Keep Gut Elim in your prayers, and service is also needed. Time is short and the workers are few.”

To learn more about Gut Elim and how to support through prayer and donations, please visit www.lordsmove.org.