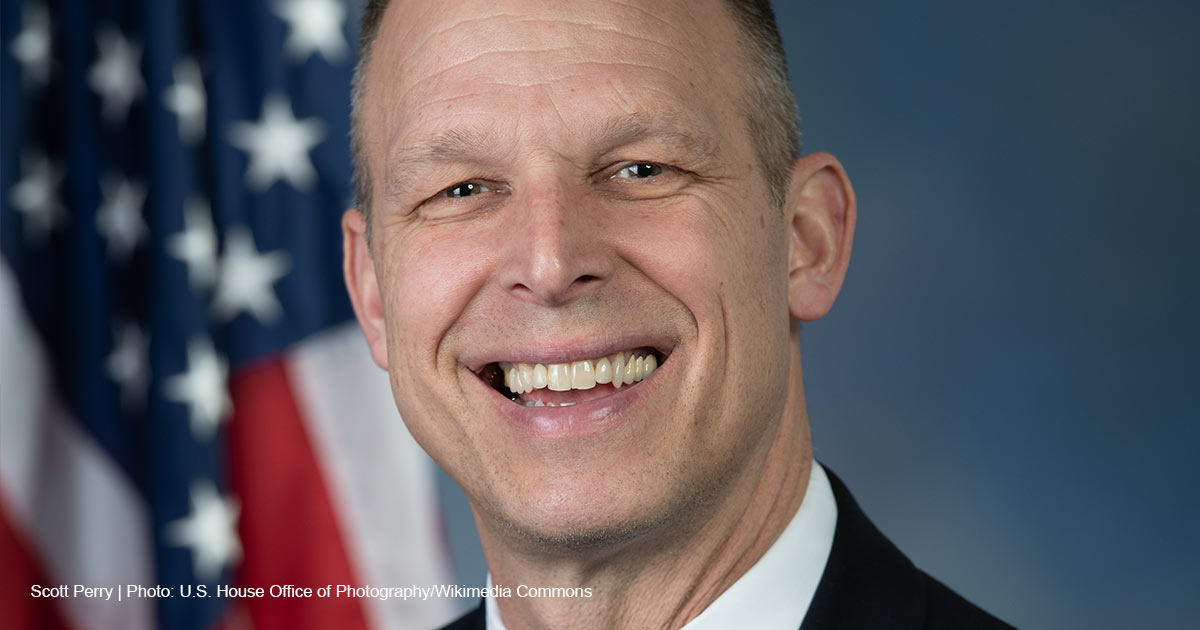 If the 12 Republican senators who voted for the Democrats’ same-sex marriage bill don’t have buyer’s remorse, they will. Take it from Pennsylvania Rep. Scott Perry (R-Pa.). Ever since his “yea” vote in July, the House Freedom Caucus chair has been squarely in the blast zone of movement conservatives. Now, as his Senate colleagues flirt dangerously with the same mistake, he has one word for them: Don’t.

Apart from GOP Conference Chair Elise Stefanik (R-N.Y.), Perry’s betrayal on marriage this summer stung the deepest. As the head of the strongest pro-family bloc in the House, his defection was a shock to everyone — including his own caucus. Four weeks into the blowback, Perry was put in the embarrassing position of defending his vote, as the Freedom Caucus he led openly lobbied the Senate to reject the radical proposal he supported.

Four months later, Perry’s regret is palpable. Today, instead of joining the rebellion, he’s leading the opposition, pleading with 12 Senate Republicans to learn from his mistake and reverse course. “Look, they’re doing the same thing in the Senate that they did in the House,” he told Family Research Council President Tony Perkins on Friday’s “Washington Watch.” “The bill did not come through committee in the House — it went directly to the floor. We didn’t have a lot of information on it when they were calling for the vote.”

At the time, Perry said, he was on the phone with his pastor, with the local Catholic priest, and other ministers. Democrats had given them a false choice: to either vote against natural marriage or vote against interracial marriage — which was the phony messaging they were assigning to the debate, even though the Loving ruling was never in question. Obviously, he told Perkins, he didn’t want to oppose either. But, as Perry explained, Democrats were trying to paint anyone who objected as a racist. “I had to vote almost immediately,” he recalled. “And I calculated incorrectly. And maybe that’s the best way to put it — that my long-standing support of traditional marriage would be understood, and I didn’t want to vote against interracial marriage. And that’s the same trick they’re playing now.”

At the end of the day, Perry urged, “this [bill] actually destroys religious freedom and the ability to enforce religious freedom. And that’s why they’re doing this. So I want to encourage my friends on the Senate side of the building to not be fooled. Anything less than the Mike Lee amendment is going to be unacceptable. So if the Democrats don’t allow that amendment to be in order and for that amendment to pass,” he insisted, “they absolutely must vote no.”

Perry’s mea culpa comes at a crucial time for the caucus, now that Republicans hold the gavel. Walking in solidarity with his conservative members will be incredibly important, especially after Rep. Chip Roy (R-Texas) outed GOP leaders for ignoring key cultural issues over the past several years. Behind closed doors, Roy warned on a panel with Russ Vought this week, the establishment leaders view core values like marriage “as an existential threat” — words that should trigger alarm bells for anyone already concerned about liberal Republicans like Rep. Tom Emmer (R-Minn.), the incoming House Whip. Like Stefanik, who voted against marriage, the Minnesotan is another LGBT activist who stands in direct contradiction to the party that’s pushing for parents and against woke corporate America.

Speaking very candidly, Roy and former Management and Budget chief Russ Vought called the backroom negotiating more like a “cartel vote,” where House leaders have been elbowing out social priorities. “We haven’t had a vote on an amendment on the floor of the House of Representatives in open debate since May of 2016,” Roy lamented. “Cultural issues for decades have just kind of [been] pushed away, pushed to the side,” Vought agreed, even as Georgia Governor Brian Kemp (R) and Florida Governor Ron DeSantis (R) prove just how valuable to the party they can be.

Now, with liberal Republicans like Emmer consolidating more power, there’s a legitimate fear that House leaders won’t have the moral courage to go on the offensive in areas that are actually motivating voters: parental rights, transgenderism, education, and life.

If the GOP has control, Perkins asked, will the House at least return to regular order, where sinister bills like the Respect for Marriage Act go through committee and get a hearing?

“Well, it darn sure better,” Perry replied. “That’s exactly what I and other members of the Freedom Caucus and … even members-elect that just came to Congress are fighting for right now. [It’s] to make sure that we, among other things, have time to read the bills. There hasn’t been an amendment on the floor in six years. You can’t even represent your district. All of that stuff has to end. And we are fighting for that. We shouldn’t have to fight for it, quite honestly, but we are right now.”

Without it, the congressman pointed out, the ticking time bombs that senators are ignoring in the marriage bill aren’t hidden. And yet, that’s “exactly why the Left and the Democrats ran it this way,” Perry said. “You don’t want to be a racist, but you’re not against traditional marriage. You shouldn’t have to make that choice. And that’s what’s facing senators. And they probably — if they have not gone through it, the subtleties of it, they don’t realize that this is an absolute assault on religious freedom.”

His caucus conveyed as much in another appeal to the Senate this week, urging, “This vote is about more than culture. It is about affirming the self-evident truth that marriage is a natural institution that predates government,” they wrote. “Republicans must stand united in defense of that truth and the institution of marriage which forms the backbone of a healthy society. There can be no compromise on this question.”

The powder keg this law would ignite, Perkins warned, especially the muzzle it would put on school board and curriculum debates, would be catastrophic. “Because when you talk about what’s happening in classrooms across America, [all of this] LGBT indoctrination is linked to it.”

“You’re absolutely right,” Perry nodded. “And this is by design. [So] I would encourage any of those senators — if they have any reservation at all — they should contact me. I’m happy to talk to them about the thought process through this… [But it] will be a mistake for them if they vote for this. And I would encourage them absolutely not to do it.”