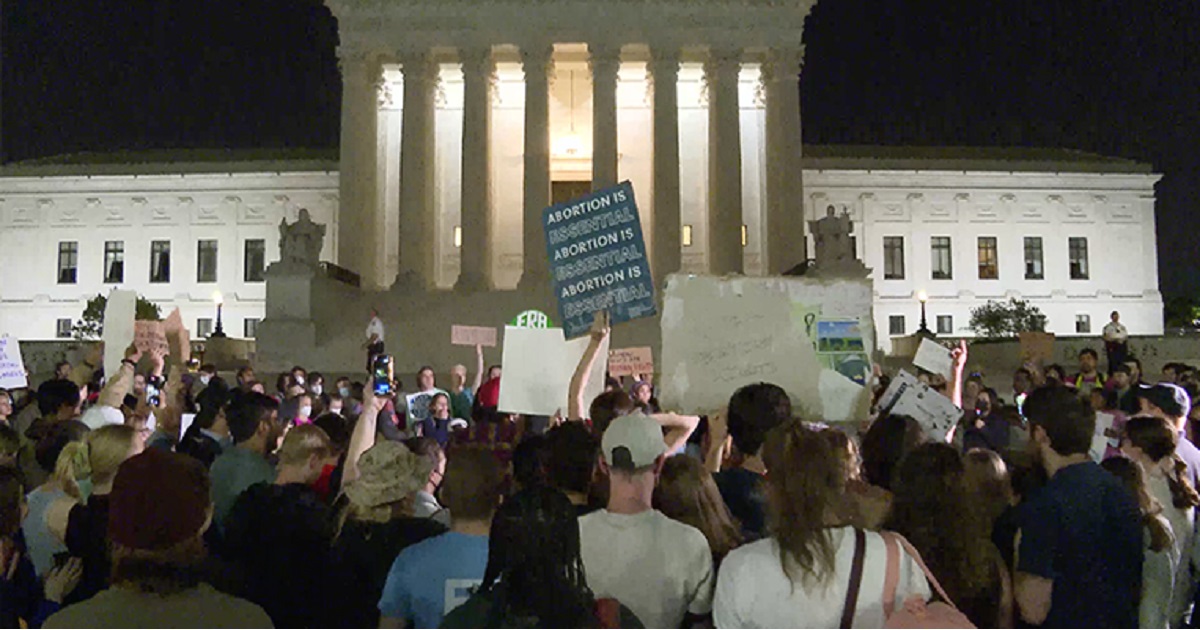 Is the End of Roe within Breach?

It was the scene that wasn’t supposed to play out for another seven weeks — angry protestors outside the Supreme Court, clutching signs and shouting at the building’s dark offices. As word of the unprecedented leak on Dobbs started to spread, the crowd swelled, spilling into the sidewalks until the wee hours of the morning, as everyone speculated on what this window into the most important abortion ruling in 50 years could mean. While police raced to put up barricades around the court after the scandal hit the wire, one thing was crystal clear: a seismic shift on one of the fiercest political debates in America was already underway.

In the hours after Politico’s story exploded, insisting that the collapse of Roe v. Wade was imminent, the shock of the situation started to set in. On both sides, there was outrage — for the Left, that the days of federalized abortion-on-demand could be numbered; for the Right, that this leak represented the deepest betrayal of the Court and was intended — many suppose — to squeeze the majority votes into submission. “It’s impossible to overstate the earthquake this will cause inside the Court, in terms of the destruction of trust among the Justices and staff,” SCOTUS blog tweeted in the aftermath. “This leak is the gravest, most unforgiveable sin.”

By morning, members of Congress, lawyers, court watchers, and journalists were still trying to digest the historic breach. Chief Justice John Roberts, who hadn’t voted on Dobbs in the February draft of Justice Samuel Alito’s ruling, released a firm statement Tuesday, vowing that “the work of the Court will not be affected in any way.” “To the extend this betrayal of the confidences of the Court was intended to undermine the integrity of our operations, it will not succeed.” Then, confirming that the draft opinion was in fact genuine, Roberts cautioned that “it does not represent a decision by the Court or the final position of any member on the issues in the case.”

To pro-lifers, it was Roberts’s last comment that set off alarm bells. Whoever violated the justices’ trust is throwing a rock at the Supreme Court wall, hoping it will crack. If Roberts doesn’t close this case now — or worse, the justices cave to pressure and flip their votes — the woke forces trying to undermine the court will win. It would be open season on the justices and their credibility, “the antithesis,” NRO’s editors point out, “of a system that insulates the judiciary from politics so that cases can be decided pursuant to law, without fear or favor.”

That’s why, since late Monday night, there’s been a growing demand for the court to speed up its timeline and rule, sending a powerful message that the justices refuse to be intimidated. “Issue the decision now,” urged Missouri Senator Josh Hawley (R-Mo.). Other Republicans piled on, joining the cry for Roberts to heed the urgency of the moment and give a country rocked by this upheaval some finality. If he doesn’t, the leaks will keep coming — and so will the doubts that one of America’s most important institutions can be trusted.

In the meantime, the Left’s reaction to this controversy has certainly been an eye-opener for voters. Democrats’ vitriol against the justices, which is really just a continuation of their leadership’s running threats (“I want to tell you, Gorsuch; I want to tell you, Kavanaugh: you will pay the price,” Senator Chuck Schumer has said), is completely unhinged now. House Speaker Nancy Pelosi (D-Calif.) joined Schumer in smearing the Dobbs majority as liars — “unaccountable” justices who “ripped up the Constitution” and “defiled” precedent at SCOTUS’s reputation.

Their extremist rank-and-file took things a step farther, insisting it’s time to eliminate the filibuster and pack the court. “There is no other recourse,” Senator Ed Markey (D-Mass.) tweeted. “We must expand the court.” President Joe Biden used the leak as an opportunity to fundraise for Democrats, claiming Congress will “need more pro-choice senators and a pro-choice majority in the House to adopt legislation that codifies Roe...” Another loud chorus of congressional Leftists raised their voices for permanent abortion-on-demand legislation — leading some experts to speculate that maybe the leakers weren’t trying to harass the court so much as to “influence Congress to act before the election” or “affect the election itself.”

But if the Left thinks upending Roe v. Wade will galvanize voters, they’re misreading the national landscape. For years, the Democratic Party has overestimated the public’s appetite for barbaric late-term abortions. So while the president of Planned Parenthood Action Fund claims, “people are furious” and that this November they will “vote [pro-lifers] out,” polling suggests the exact opposite (here, here, here, and here). Most Americans want limits on abortion. They like the idea of a 15-week limit like Mississippi’s — not the Left’s heartless, taxpayer-funded open season on babies seconds away from birth. Seventy-one percent of Americans want commonsense restrictions on abortion (including 49 percent of Democrats). Another 65 percent think it should be illegal in the second trimester (like it is most places around the world).

Even so, Democrats are in no position to pass sweeping legislation on abortion. The last time they tried, this past February, a bipartisan bloc of senators stopped them. So what now? Like the enraged mob outside the court, their answer is simple: “Let’s burn this place down.” As far as most of them are concerned, “the Court as we know it isn’t worth having if it doesn’t uphold Roe,” Rich Lowry suggested. At the end of the day, the Democrats’ irreverence for our institutions is just an outgrowth of their disdain for every moral norm. If there is a silver lining to this controversy, it’s helping to expose the far-Leftists for what they are — which is not everyday people with good intentions, but lost and hardened extremists who’ve made evils like abortion their idol. They’re a desperate group willing to do anything to keep their grip on the killing culture they worship.

For Christians everywhere, who’ve marched, worked, and voted for an end to 49 years of bloodshed, this is an urgent moment. Join us in praying for the justices’ safety and courage, for Alito’s powerful rebuke of Roe to stand, and for the beginning of a new chapter in the fight to protect the unborn in states across the nation. May this be the dawn of a day we all prayed for — where all human life is welcomed into our arms and cherished in our laws. “I call heaven and earth to witness against you today, that I have set before you life and death, blessing and curse. Therefore choose life, that you and your offspring may live” (Deuteronomy 30:19 ESV).