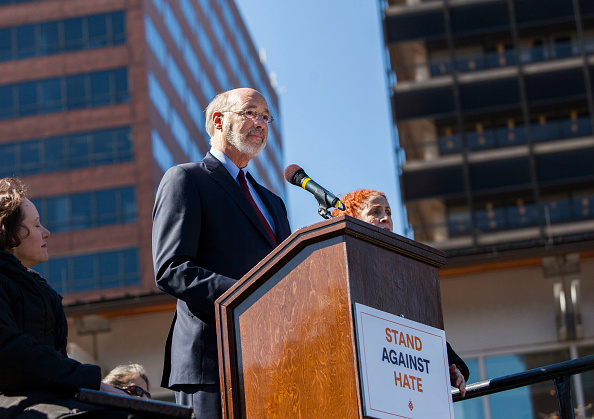 The ultimatum specifically referenced an official state web page on “Gender/Gender Identity,” which tells shockingly evil lies. Among a list of definitions for made-up words and terms like “cisgender,” “genderqueer,” and “assigned gender,” the state of Pennsylvania defines “binary gender” as “the faulty concept that there are only two genders: male and female.”

“The PA Department of Education is espousing a secular worldview on their website,” responded Rep. Barb Gleim (R), one of the ultimatum’s supporters. “The secular worldview that there are more than two genders is faulty in and of itself and can’t be proven. … If the Secretary of Education continues down this road, I agree that he is unfit to meet the demands of his office.”

While “secular” can define a spectrum of positions anywhere from a mild, non-sectarian neutrality to virulent anti-theism, the version promoted by the Pennsylvania Department of Education and their allies is closer to the latter. For instance, Naiymah Sanchez, described as the trans-rights organizer for ACLU Pennsylvania, insisted the acting secretary was merely “doing what’s right,” adding “allowing young folks to embrace who they are and pushing back against the stereotypical gender roles that society has categorized everyone in allows a younger person to really thrive and grow into their best ‘I am’ that they can be.” Those two words are so short, they’re easy to miss, but Sanchez just said children should “grow into their best ‘I AM.’” To acknowledge each child as their own little god, of course you have to reject the real one.

For their part, Pennsylvania’s Department of Education presumed to describe binary gender as a “faulty concept.” In formalized parlance, they affirm that there are many genders, and they deny that there are two genders. Specifically, they further deny that “male and female [God] created them.” Then again, public schools denied “God created” long ago. These indoctrinating bureaucrats apparently find no terror in directly contradicting God (calling him a liar who is eternal Truth). “There is no fear of God before their eyes” (Rom. 3:18).

If its transgressions extended no further than nutty definitions on a website, there would be at least a theoretical possibility that the Pennsylvania Department of Education was not actually harming students. Alas, they go further — much further. They provide practical resources to put these hideous ideas into practice, including a lesson guide for a “gender-neutral day” for grades 3-12. “The guide specifies that as part of the activity, students should pick two to three ways they will reject gender stereotypes for the day, and the teacher should make specific commitments to challenge gender norms in the classroom,” the lawmakers summarized.

“With the discovery of this reprehensible indoctrination lunacy targeting children as young as eight years old, it’s no wonder that the governor vetoed my curriculum transparency legislation,” exclaimed Rep. Andrew Lewis (R), another ultimatum supporter. Pennsylvania’s Democratic Governor Tom Wolf in December vetoed the legislation, which would have required schools to post curriculum online. Lewis said he wanted “answers as to why someone at the department thought this confusing and divisive gender-erasing curriculum would be a good idea.”

Acting Secretary Hagarty is probably not the one responsible for creating these Gender Indoctrination curricula. After all, he’s only had the job since April, and lawmakers have been questioning schools’ use of transgender propaganda since before he took the job. Still, he is now the state official responsible for overseeing the agency that is using its website to promote this propaganda, which makes him the official from whom lawmakers can demand answers.

It’s unlikely that Hagarty, who answers to Governor Wolf, will comply with the GOP ultimatum that he reform the curriculum or resign. But Pennsylvania voters will choose their next governor in November, and Republicans could make an issue of the curriculum in the governor’s race. Last year, Virginia Governor Glenn Youngkin (R) demonstrated that sensible, sane education policy can tip the scales toward Republicans, even in states that usually lean toward the Democrats.

Pennsylvania is only one chapter in the education war unfolding nationwide at the state and local level. Promoters of the transgender ideology have decided, over parents’ objections or without their knowledge, to indoctrinate their children with these permanently damaging dogmas from an impressionable age. As in many other states, Pennsylvania parents have an opportunity to stand up for their children this fall.