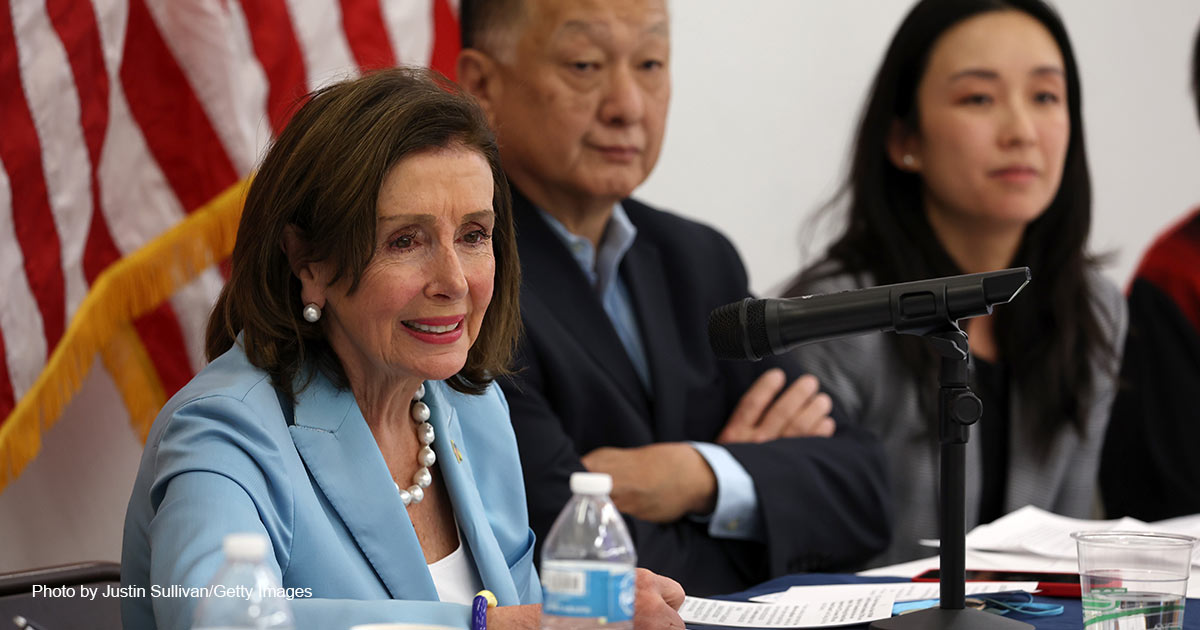 It’s rare that GOP leaders are heard cheering on House Speaker Nancy Pelosi (D-Calif). This is the unusual situation caused by the White House’s inconsistent messaging regarding Pelosi’s upcoming trip to Taiwan — a trip that China’s authoritarian leaders really don’t want her to make.

When asked about Pelosi’s possible visit to Taiwan at a press conference last week, Biden told reporters, “The military thinks it’s not a good idea right now, but I don’t know what the status of it is.” Hardly a vote of confidence from the leader of the free world. Trying to clarify, Pelosi mused, “I think what the president was saying is [that] maybe the military was afraid our plane would get shot down or something like that by the Chinese. I’ve heard it anecdotally, but I haven’t heard it from the president.”

To her credit, Pelosi has a longstanding legacy of promoting human rights in China. Early in her career, she unfurled a pro-democracy banner on a visit to Tiananmen Square in Beijing in 1991 — the site of the People’s Liberation Army’s massacre against pro-democracy student protestors two years earlier. Pelosi has yet to officially announce a 2022 visit (it was confirmed only by other lawmakers invited on the trip), yet the White House is already undercutting the wisdom of her leaked plans. While Pelosi seemed to shrug off China’s saber-rattling, the reality is that the Chinese government’s recent verbal threats about her possible trip to Taiwan are more heightened than usual, according to some experts. The Chinese foreign ministry said China would take “forceful measures” if the visit takes place. On Thursday, Chinese President Xi Jinping warned President Biden not to “play with fire” regarding Taiwan.

Many members of Congress visit Taiwan, but this would be the most high-profile trip since 1997 when then-House Speaker Newt Gingrich visited. Yet, the environment is more tense now than it was during that time. Some Taiwanese analysts fear that if Pelosi were to back out of the trip now, it would further embolden Chinese belligerence and leave Taiwan in a more insecure position than before. It would also teach Chinese officials that if they make enough noise, they can control the actions of U.S. leaders. That should never be true.

Bob Fu, President of ChinaAid and senior fellow for International Religious Freedom at Family Research Council, told The Washington Stand, “Speaker Pelosi should visit Taiwan without further delay or excuses. The travel schedule of an American congressional leader must not and should never be dictated or sabotaged by the genocidal Xi Jinping’s Communist regime.” He said her visit “will make it clear to the 23 million Taiwanese and the CCP, as well as to others of our Asian allies, that American people stand in absolute solidarity with our value-sharing allies and strategic partners.”

Chinese leaders are highly sensitive to any assertion that Taiwan is an independent nation, claiming the island is a part of China. While the U.S. does not recognize Taiwan as a sovereign state, the U.S. maintains unofficial diplomatic relations with Taiwan and has both a practical and a moral interest in seeing the young Taiwanese democracy thrive and stave off the threat of a Chinese invasion. It is estimated that the amount of goods transported through or flown over the Taiwan Strait are roughly equal to 40% of the world’s annual GDP. The world would be a far less secure place if Communist China controlled that strait.

Furthermore, Taiwan’s democratic society, though imperfect, protects basic human rights and gives its citizens a voice in the government. It would be a moral tragedy to watch the island fall under the oppressive authoritarian leadership of the Chinese Communist Party. The expansion of oppression, particularly into the vulnerable and geostrategic South Pacific, would make the world a more dangerous place for us all. The recent example of China’s takeover in Hong Kong is a sobering reminder of the disastrous consequences of the Chinese Communist Party’s rule.

But China has not damaged Taiwan’s democracy yet. If Pelosi goes to Taiwan, it will send a strong message to Chinese leaders that their saber-rattling will not govern our foreign policy. That’s a message they need to hear. President Biden’s lack of support for Pelosi’s trip — one critical to Taiwanese security and human rights advocacy — is a stunning display of ignorance and cowardice. Nancy Pelosi should go to Taiwan, and she should do so with the full backing and encouragement of U.S. leaders.