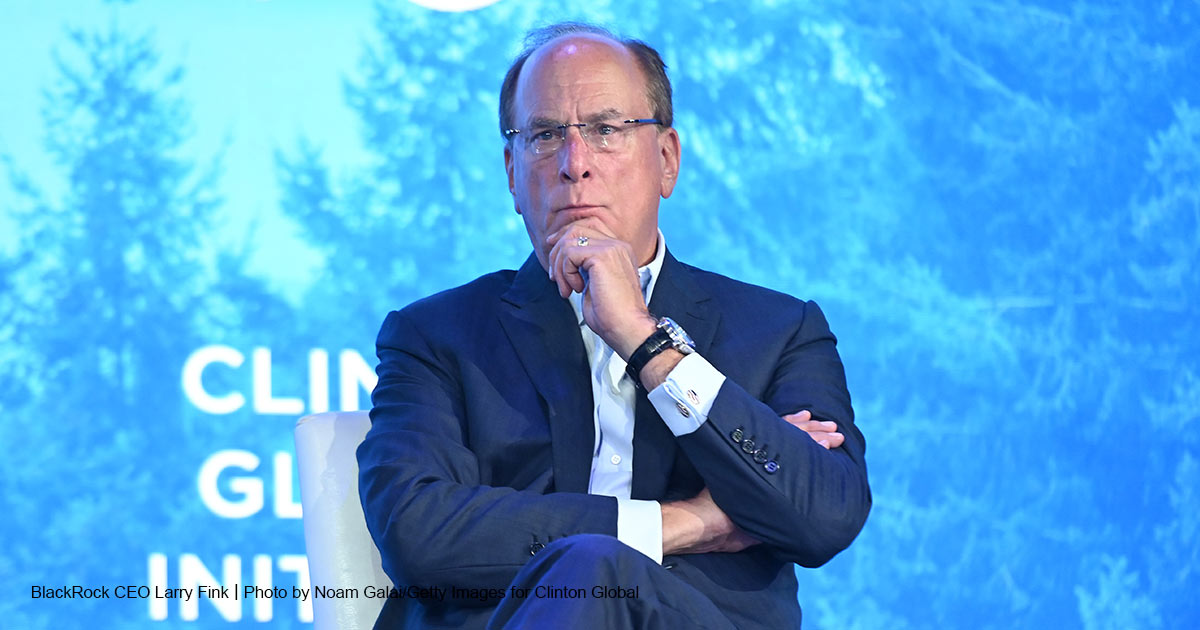 For a billionaire, Larry Fink hasn’t had an especially good year. The CEO of BlackRock, who ushered in this age of corporate wokeness, has been used to operating in the shadows. Those days, Republicans insist, are over. After years of having his way with investors, Fink is now in an unfamiliar position: playing defense. And thanks to the state of Louisiana, he’ll be playing it with $800 million less dollars.

In a gut-punch to BlackRock’s portfolio, the Pelican State announced Wednesday that they’re taking their money and walking. Sick of the radical politics Fink is pushing, they’ve decided to find another firm to manage Louisiana’s assets. John Schroder, the state’s treasurer, broke the news to Fink in a letter, writing that as someone who oversees $64.8 billion in cash flow, he refuses “to invest a penny of our state funds with a company that would take food off tables, money out of pockets, and jobs away from hardworking Louisianans.”

Like so many people, Schroder takes issue with BlackRock’s decision to put its extreme climate agenda ahead of the state’s best interests. “This divestment,” he wrote, “is necessary to protect Louisiana from actions and policies that would actively seek to hamstring our fossil fuel sector. … [Y]our support of ESG investing is inconsistent with the [economic well-being] and values of Louisiana. … Simply put, we cannot be party to the crippling of our own economy.” There’s a big difference, he points out, between giving investors the choice of boycotting the oil industry and using other people’s money to do it.

Once the paperwork is finalized, the divestment will amount to a whopping $794 million dollars — the largest hole blown in BlackRock’s assets of any state so far. But surely not the last.

Back in early August, 19 state attorneys general fired a warning shot at Fink, raising the possibility that what BlackRock is doing with client funds isn’t even legal. “Many of our laws state that a fiduciary must ‘discharge [their] duties solely in the interest of the participants and beneficiaries … for the exclusive purposes of … providing benefits to participants and their beneficiaries …” In other words, if the oil industry is a good investment for a pension fund BlackRock manages, then Fink can’t let his personal climate agenda stand in the way of it.

BlackRock’s first responsibility is “to return the maximum amount back to those who are putting into the retirement system,” Louisiana Attorney General Jeff Landry (R) insists. Their advice is supposed to be … ‘Look, these are sound investment policies.’ They [shouldn’t] be out there trying to determine environmental policies or social policies. They’re supposed to be returning money to the investors. The job of social policy happens in government, happens in Congress, happens in state legislatures.”

And increasingly, those government leaders are taking their power back. West Virginia Treasurer Riley Moore (R) kicked off the parade earlier this year, dropping BlackRock for all of the state’s banking transactions. “Any company that thinks Communist China is a better investment than West Virginia energy or American capitalism clearly does not have the best intentions for West Virginia,” he declared. Since then, several states are considering similar moves to punish Fink — including Texas, who started to disentangle from BlackRock and nine other firms this summer — Kentucky, Oklahoma, Florida, South Carolina, Idaho, Utah, Wyoming, Arkansas, and North Dakota.

Justin Danhof, whose Strive Asset Management is one of the few firms openly challenging Fink, thinks “BlackRock is learning the hard lesson that not all states agree with environmental mandates and social policies that are pushed by California and New York. Just like voters can vote with their feet by moving,” he told The Washington Stand, “state pensions can vote in the market by their asset allocation.”

Heading into this year, Danhof pointed out, the three biggest villains in asset management — BlackRock, Vanguard, and State Street — had almost $10 trillion dollars’ worth of shareholder power at their disposal (roughly the size of America’s GDP). For years, they’ve been using their votes and engagement at shareholder meetings to force CEOs into taking woke positions. “Not every company you see taking a tremendously woke actions actually wants to do it,” Justin explained. “It’s just that their largest investors are pushing them to…”

And yet, with every cancelled contract, every state split, conservatives are slowly draining the power away from BlackRock and putting it back in the hands of the people. “Two hundred fifty years after we declared independence from a monarchy,” Danhoff has said, “we’re dealing with a different kind of monarch. Larry Fink was not elected, but he sure acts like an elected leader — because the issues that they’re using their shareholder vote [to advance] are properly decided by the American public at the political ballot box. So again, they’re achieving through the backdoor what they can’t get through the front door.”

But even that door may be closing, thanks to the state leaders and everyday conservatives forcing Fink to — if not reconsider — at least pay for his culture wars. Stephen Soukup, vice president at The Political Forum and author of “The Dictatorship of Woke Capital,” applauds the wave of state conservatives standing up to the “Wall Street bullies” and “rejecting the one-size-fits-all, top-down, anti-democratic ESG investment strategies employed by those bullies.”

“Asset managers are not the only ones who have fiduciary responsibilities. Elected state financial officers have them as well,” Soukup told TWS. “Congratulations to Louisiana Treasurer John Schroder for taking his duties seriously and telling the biggest of the bullies, BlackRock, that he can no longer allow the firm to manage his state’s investments in a manner that threatens the state’s interests and its residents’ livelihoods.”