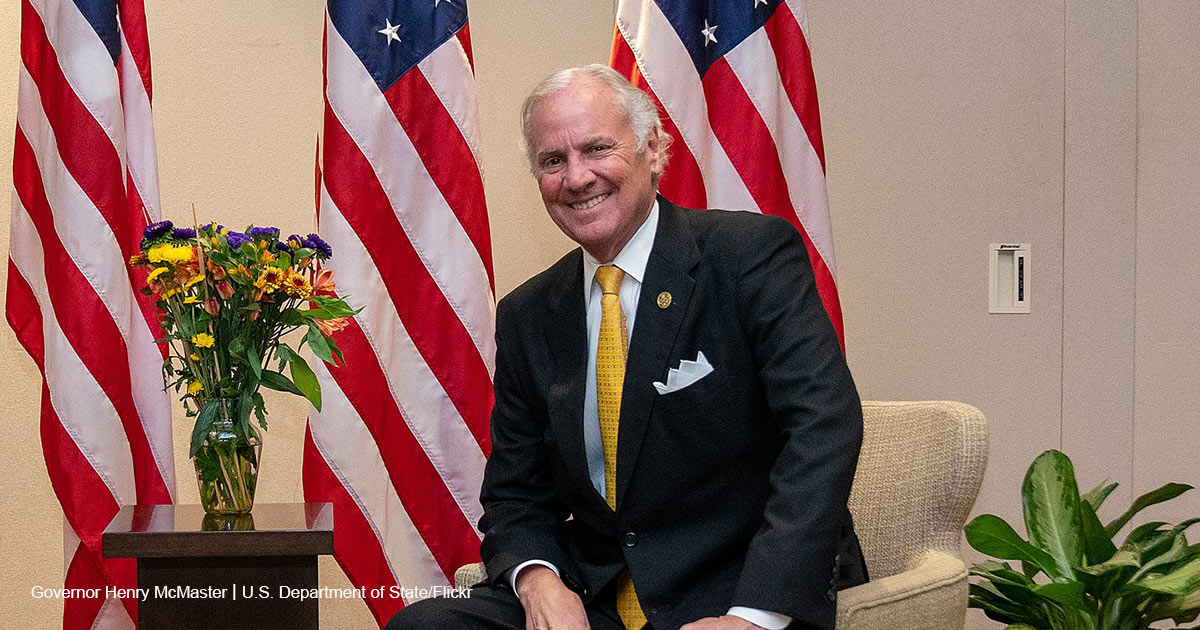 McMastering Marriage: What the GOP Can Learn from the SC Gov’s Stand

If the marriage debate was supposed to happen after the election, no one told South Carolina. Wednesday night’s showdown between Governor Henry McMaster (R) and challenger Joe Cunningham devoted a good chunk of time to the subject, which Democrats desperately want to believe is a winning issue for them. Since the end of Roe v. Wade, the president’s party has been deliberately stoking fears that Obergefell is the next to fall — a prospect that didn’t seem to bother McMaster one bit.

“There are concerns,” the moderator began, “that just like with the abortion ruling … the court could also reverse the gay marriage precedent it passed. If the court reverses the gay marriage ruling … and throws it back to the states,” McMaster was asked, what would his position be? If the issue came back to South Carolina, would he support same-sex marriage legislation?

The veteran politician refused to budge, pointing out that same-sex marriage is outlawed in the state constitution, thanks to a landslide vote (78%) in 2006. It’s also, as McMaster reminded everyone, not recognized by state law. “… [M]aybe I’m old fashioned, but I think that marriage ought to be between a man and a woman — just like I think that boys ought to play boys’ sports and girls ought to play in girls’ sports. … I mean, you have to have some common sense in this arena, which seems to be changing all the time. [But] our traditions … are strong — and I think that for a reason.”

Cunningham opted for the Left’s default setting: mockery. “Well, for those of you who are just tuning in, it’s 2022, and Governor McMaster wants to ban same-sex marriage. You just heard that tonight, folks.” Then, in a gratuitous swipe, he insisted, “We have politicians that have been in government so long and become so calcified in their beliefs in government. McMaster — he’s been a politician literally longer than I’ve been alive. And he’s been taking our state backwards the entire time. Governor McMaster has been leading South Carolina into the 1950s, since the 1980s.”

McMaster never flinched, firing back, “I don’t care who you love or you don’t love — or who you want to live with or what you want to do. That’s your business. But I think marriage is a special institution and that designation ought to be reserved for a man and a woman. That’s what I think. And as far as taking South Carolina backwards,” he said, “well, Joe, you must be about the only one on earth who thinks that, because everybody else is coming to South Carolina, they’re coming from all over the world to invest in the people of South Carolina in this place.”

He pointed out that companies are flocking to the state to hire “our people,” investing over $5.2 billion this year. “And the year is not over,” McMaster added. “To say that we are going backwards would be news to [everyone moving and working here], because it is not a fact. We’re booming. And I’m going to do everything I can to see that we continue [it].”

It was a textbook example of how Republicans can stand their ground on a controversial issue and win. If the best argument Democrats have for changing history’s oldest norm is “same-sex marriage is trendy,” then what is the GOP afraid of? Conservatives have a much more potent arsenal than that, thanks to piles of social science research, hundreds of stories of post-Obergefell persecution, the shredding of religious freedom, and a little thing called moral truth.

What else would Cunningham toss in the name of modernism? Is gender old-fashioned? Is monogamy? “Seven years from now, will we be saying that those issues don’t matter? That the world has ‘moved on?’” Family Research Council President Tony Perkins asked. Will we get to the point, as this administration already has, where science and objectivity have no place in our national conversation because some loud minority decides the facts aren’t “fashionable” anymore?

Right now, we’re in a ferocious war for our daughters’ safety, their rights, and this generation’s identity, because the redefinition of marriage opened the door to the redefinition of everything. It is, as Perkins pointed out, “the bitter root of so many evils we’re fighting today” in school classrooms, public libraries, and children’s locker rooms. Most Americans are fed up — longing for leaders who will survey this madness and reject the call to falsehood. If they don’t agree with McMaster’s views, they at least respect that there are still men and women who aren’t infected with the Left’s moral relativism.

Others, many more than Democrats would admit, agree wholeheartedly with conservatives for holding the marriage line. “Governor McMaster is not stuck in the stone ages like Joe Cunningham may believe,” Family Research Council’s Connor Semelsberger insisted. “Rather, he holds mainstream commonsense beliefs that reflect the people of his home state of South Carolina — that life begins at conception, that marriage should be between a man and a woman, and that a person’s sex is based on biology and not personal preference.”

Joe Cunningham, on the other hand, “is the one who holds extreme beliefs,” Semelsberger insisted. “When serving in Congress in 2019, he voted for the Equality Act, which would strip away all religious freedom protections for those who hold traditional beliefs about marriage, and a bill that would federalize all elections. He even voted against a bill that would protect infants born alive from failed abortions. Maybe Cunningham can learn a few ‘old fashioned’ things about time-tested truths from his opponent.”

As Perkins told The Washington Stand, “If ‘old-fashioned’ means stronger families, lower crime, and safer communities, then Governor McMaster is not taking his state backward but leading his state forward toward social and economic stability.”

When this question is put to Senate Republicans next month, some will be tempted to stick their finger in the cultural winds to see where they should stand. If they do, Perkins warns, they’re throwing away everything the American people have come to respect about today’s party — their courage, their common sense, their conviction. “Maybe these senators think that linking arms with the Left makes them seem more compassionate or contemporary. But real leaders don’t vote out of fear or political calculus. They don’t take their cues from the courts or public opinion. They do what’s right, no matter what it costs them. That’s what voters respect.”

So the next time Republicans are put on the spot, maybe it’s time to reframe the debate in a way society will appreciate. Marriage isn’t old-fashioned. It’s vintage.