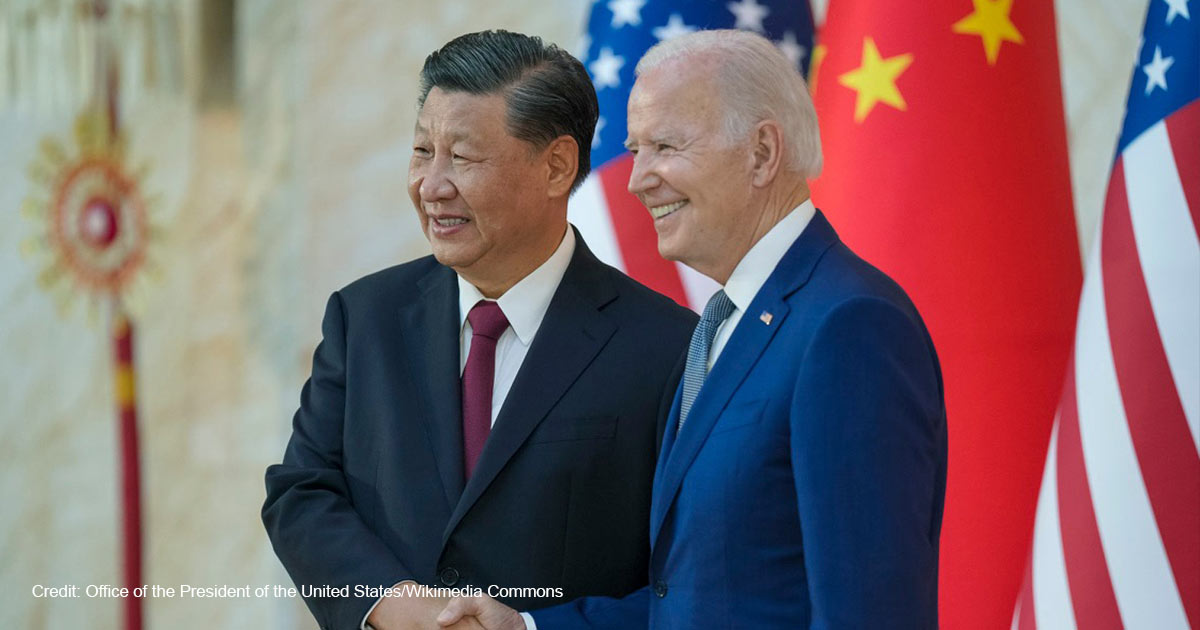 Trust is a wonderful thing. It enables friendships and business investment, marriages, and simple purchases at the grocery store.

Yet trust, when misplaced, is also a dangerous thing. It emboldens the deceptive and destroys the naïve. It is my fear that our president might well be in this last category.

Following his meeting this week with Chinese President Xi Jinping, Mr. Biden said “he does not believe there will be an ‘imminent attempt’ to invade Taiwan.” Why? Does Mr. Biden trust a leader whose whole career is built on lies and the hunger for power?

Consider President Xi’s remarks about the issue. “The Taiwan question is at the very core of China's core interests,” Xi told Biden. It is “the bedrock of the political foundation of China-U.S. relations, and the first red line that must not be crossed in China-U.S. relations.”

First, that Xi felt comfortable making this kind of threatening statement speaks to his perception of his American counterpart. The Chinese are careful students of American politics. Given Mr. Biden’s lengthy history of gaffes and inconsistencies, it would not be surprising if Xi knew he could make this kind of bullying comment to Mr. Biden with impunity.

Would he have said the same thing to, say, a Ronald Reagan? If another Chinese leader had said this to Mr. Reagan, I suspect he would have responded that America would act in her and her friends’ interests and that no threat would change our commitment to Taiwan.

This is called strength. Joe Biden is very good at snarling and sounding tough, but in the press of events, he wavers. Think back to August 2021 and his disastrous pull-out of American forces from Afghanistan. American interests were compromised, massive quantities of our military materiel lost and, most importantly, the lives of the Afghanis who stood with the United States were placed at grave risk. President Biden’s incompetence led to one of the most serious American foreign policy failures since the end of the Vietnam War.

Earlier this year, President Biden said of Russia’s pending invasion of Ukraine, “It’s one thing if it’s a minor incursion and then we end up having a fight about what to do and not do.” A “minor incursion?” Did he mean that if Russia tried to eat-up Ukraine in small bites it would have been acceptable?

Four weeks almost to the day later, Vladimir Putin’s forces invaded a free and independent republic. It was not a “minor incursion.” But no doubt the Russian president heard weakness in Biden’s dismissive attitude about the use of military force.

Would Putin have invaded anyway? Yes, probably. But was his confidence in the invasion’s success encouraged by Biden’s thoughtless musings? Yes, also probably.

Second, why would anything Xi Jinping says inspire Biden’s confidence that no Chinese attack on Taiwan is “imminent?” What President Reagan said of the now-defunct Soviet Union more than 40 years ago applies to today’s Communist China: “The only morality they recognize is what will further their cause, meaning they reserve unto themselves the right to commit any crime, to lie, to cheat, in order to attain that.”

Massive, sophisticated, international theft is a major part of China’s stock-in-trade. In May of this year, a firm headquartered in Massachusetts, Cybereason, uncovered “a yearslong malicious cyber operation spearheaded by the notorious Chinese state actor, APT 41.” APT 41, under the auspices of the Chinese government, “siphoned off an estimated trillions (of dollars) in intellectual property theft from approximately 30 multinational companies within the manufacturing, energy and pharmaceutical sectors.”

Cybereason CEO Lior Div said of the theft campaign, “We’re talking about Blueprint diagrams of fighter jets, helicopters, and missiles.” In addition, he said, the Chinese went hard after American pharmaceuticals. “We saw them stealing (intellectual property) of drugs around diabetes, obesity, depression.”

This is only one example. FBI Director Christopher Wray puts it in simple if disturbing terms: “The greatest long-term threat to our nation’s information and intellectual property, and to our economic vitality, is the counterintelligence and economic espionage threat from China.”

Whether China has the military capacity to invade Taiwan is debatable. But what is not in question is that China is not a nation whose leaders can be trusted — about anything.

Finally, America has a sacred commitment to defend our Taiwanese friends. The 1979 Taiwan Relations Act obligates the United States to “provide Taiwan with arms of a defensive character” and “maintain the capacity of the United States to resist any resort to force or other forms of coercion that would jeopardize the security, or social or economic system, of the people of Taiwan.”

As with any tyrant, the only thing Xi Jinping respects is strength. Whether or not President Biden has it in sufficient supply when it comes to defending the Taiwanese is one of the great international questions of our time.