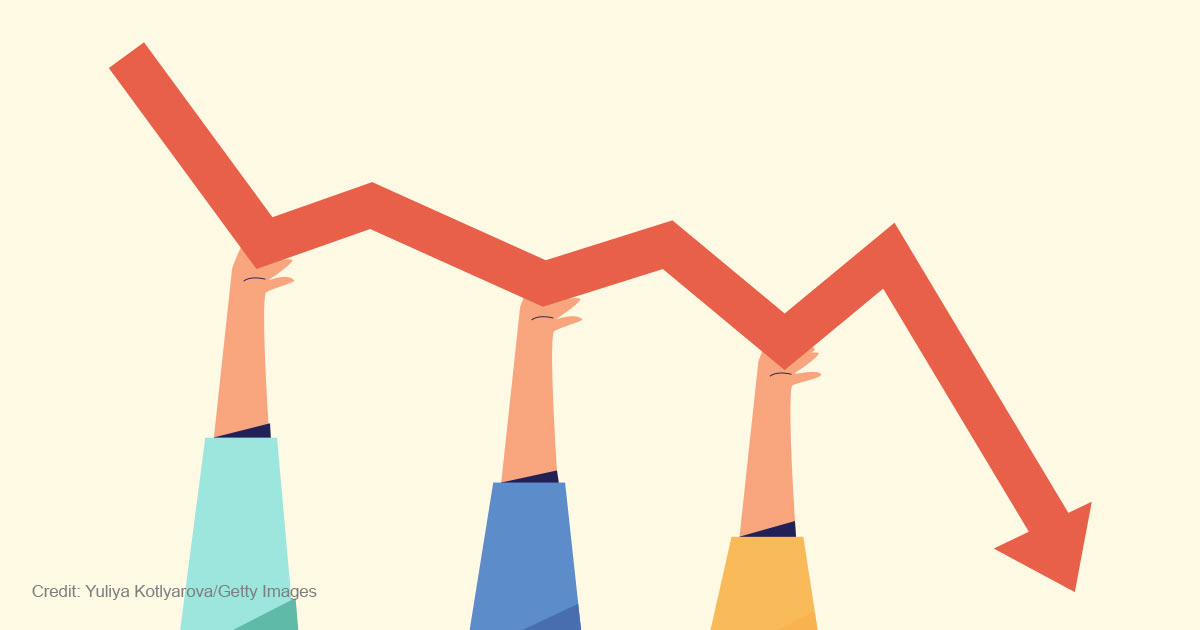 The U.S. economy continued to contract in the Second Quarter of 2022, according to an advance estimate of Gross Domestic Product (GDP) released on Thursday by the Bureau of Economic Analysis (BEA). Real GDP (adjusted for inflation) decreased 1.6% in the first quarter of 2022 and decreased 0.9% in the second quarter, according to the BEA.

A widely accepted “rule of thumb” is that, when the economy experiences two consecutive quarters of economic contraction (declining GDP), it has entered a recession.

However, the Biden administration has made much of the fact that the National Bureau of Economic Research (NBER), which is responsible for officially determining the dates of a recession, employs a definition that doesn’t mention two quarters of negative growth. According the NBER, the business cycle alternates between periods of expansion (the norm) and contraction (recession), and “a recession involves a significant decline in economic activity that is spread across the economy and lasts more than a few months.” In anticipation of a bad GDP report, White House officials have spent the past week trying to emphasize all the good news with the economy. Biden himself said on Monday, “We’re not going to be in a recession, in my view.”

The White House arguments seem tailored to demonstrate that the decline in economic activity is not “spread across the economy.” According to BEA’s report (Table 1), there were declines in the Second Quarter of 2022 in durable goods, nondurable goods, fixed investment, nonresidential structure investment, equipment investment, residential investment, federal spending, and state and local spending. There were increases in services, intellectual property products, and exports.

Unfortunately for the White House, the internet has a long memory — at least longer than a presidential administration. On Monday, White House Director of the National Economic Council Brian Deese denigrated the “two consecutive quarters” definition, saying, “in terms of the technical definition, it’s not a recession.” But in 2008, Deese said, “of course economists have a technical definition of recession, which is two quarters of negative growth.” The key difference between today and 14 years ago is: the party in the White House.

In a statement Thursday morning, President Biden responded to the Second Quarter GDP report, “It’s no surprise that the economy is slowing down as the Federal Reserve acts to bring down inflation.” On Wednesday, the Federal Reserve increased its interest rate benchmark for the fourth time this year by 0.75 percentage points to a target range of 2.25%-2.5%. In December 1980, the Fed hiked their target range to 19%-20%, both beating down double-digit inflation and sparking a recession in the process.

But the economy isn’t just “slowing down” — that is, not growing as fast as last year’s post-COVID recovery. It has turned around and is heading backwards! The president still seems unwilling to admit that the economy has entered a recession, even while he insists that a slowdown is “no surprise.”

This is strange, because it shouldn’t matter that much whether the economy is shrinking at an annual rate of 0.9% or growing at an annual rate of 0.3%, as the Dow Jones had predicted; such growth is still sickly. The economy is not like an airplane in a nosedive, where leveling off 300 feet above ground level or 900 feet below ground level makes all the difference in the world. Rather, these statistics merely reflect the sum total of people’s individual activities and give a reference point to compare their experiences over time. So, a change of less than 1% is only marginal.

President Biden could defend a recession far more plausibly than he is denying it. Yes, we’re in a recession, he could say. But that’s what it takes to counter inflation — something Americans are far more concerned about — and fighting inflation remains their top priority. Plus, the recession is only a mild one so far, and there are still positive signs in some areas of the economy. Here Biden could make his points about strong consumer spending and low unemployment. The aftershocks of COVID are still plaguing our supply chains and workforce, but we’re gradually righting the ship. That’s what a clever administration would say.

Alas, America has the administration it deserves, not the one it needs. Unwilling to accept one iota of blame, they’ve chosen instead to deny reality, brazenly change definitions, and insist that everyone shut up and trust the experts. And that pretty much sums up the character of this administration in any crisis of any nature. But these tactics quickly grow tiresome, and many Americans have grown wise to the game. They want results, not excuses. After only 18 months, the administration’s rhetorical gambits have become as effective (and appropriate) as shooting rubber bullets at a dart board.