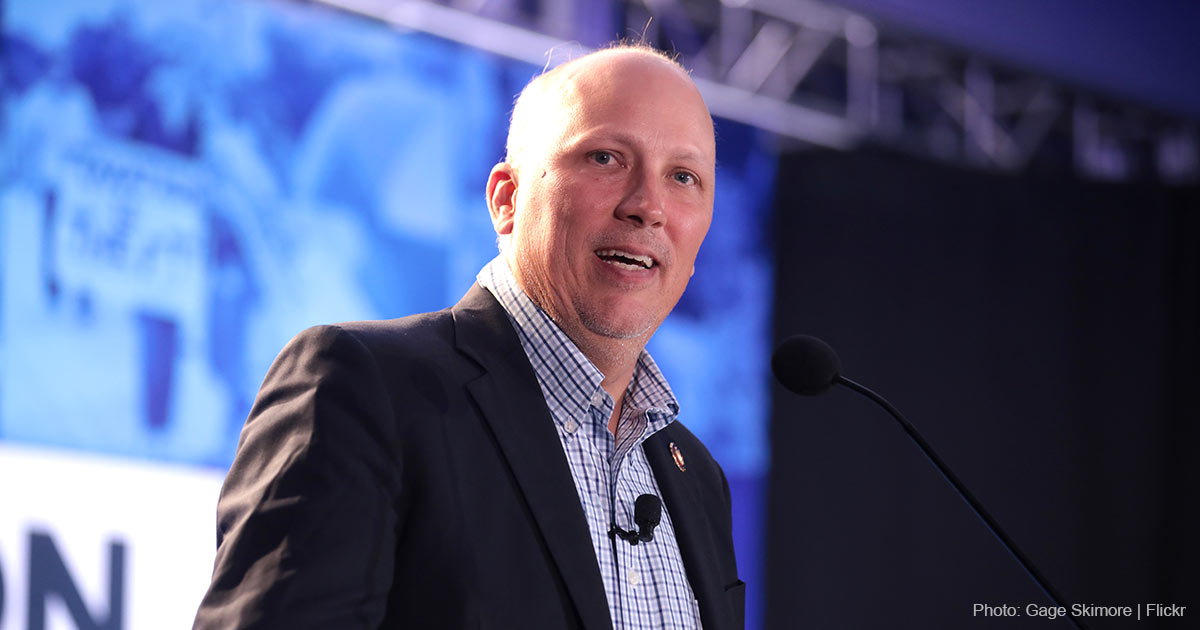 While Americans are running last minute errands for a weekend of feasting and football, conservatives are frantically working to stop what’s awaiting everyone on Monday: the end of religious freedom as we know it. With just days until the next big hurdle on the so-called Respect for Marriage Act, House and Senate Republicans are working around the clock to peel off three of the 60 votes Democrats need to keep the bill alive. Target number one? The party’s 12 defectors.

Before Congress recessed for Thanksgiving, both sides knew they’d be returning to a ticking time bomb. Senate Majority Leader Chuck Schumer (D-N.Y.) had already circled November 28 for the next make-or-break vote on his party’s same-sex marriage bill — sending conservatives into a mad scramble to change the minds of a dozen Republicans.

Rep. Chip Roy (R-Texas), a House stalwart who’s spent every waking moment trying to stop this nightmare, laid the blame for this mess squarely at the feet of cowardly Republicans. “First of all,” he told “Washington Watch” guest host Joseph Backholm, “I want to start with the truth — the fundamental truth — that marriage is between one man and one woman. The fact that you’ve got a bunch of gutless politicians [running around] saying, ‘Well, we don’t want to talk about that because you know, certain things are changing …’ Hold on. Truth is truth. It doesn’t matter what Congress does. It doesn’t really matter what the court does. Truth remains true.”

Republicans didn’t stop battling for truth in Roe v. Wade, Roy insisted. Abandoning marriage — like abandoning the unborn — should never be an option. “… And we should have the courage to say so.” Right now, he explained, we’re on the brink where religious freedom is concerned. Our goal should be “that if you believe that truth, if you act on that truth, if you speak out on that truth — that you will not be ostracized, that you will not have litigation or legal punishment, and that you will [face] negative consequences because you dare speak what you believe is the truth.”

To those who claim that’ll never happen in America, Roy reminds them — it’s already happening in the West. He pointed to Päivi Räsänen in Finland, who could still be thrown in jail for tweeting a Bible verse on sexuality. “That’s what we want to avoid here. And this legislation that is being moved through fails on all counts. It undermines the definition of marriage. It does not protect religious liberty — no matter what some of [the bill] sponsors say.”

Roy’s colleague, Rep. Vicky Hartzler (R-Mo.), told Backholm on Tuesday that anyone who believes that this “compromise” will stop persecution is deceiving themselves. “[Democrats] act like they’re being so magnanimous in this bill to protect our pastors [and] not force them to carry out same-sex marriage ceremonies — and yet they trample on the freedom of everyone else in this country and the rights that are enshrined in the First Amendment. And so it’s a very sad situation, and it’s deceiving. And people need not be deceived by this.”

Including — she and Roy agree — the 12 Republicans on the wrong side of the Senate’s first vote. “[They] need to find the courage to stand up in defense of marriage and religious liberty. Roy Blunt. Richard Burr. Shelley Moore Capito. Susan Collins. Joni Ernst. Cynthia Lummis. Lisa Murkowski. Rob Portman. Mitt Romney. Dan Sullivan. Thom Tillis. Todd Young,” Roy listed. “All except for Susan Collins are from bright red states. Notably, Cynthia Lummis [is] from a 70% red state. … Shelley Moore Capito from basically a 69-70% red state. They need to hear from [you] and make sure that they know that their constituents don’t want them to vote for this bill.”

Hartzler called out two senators in particular — Blunt and Ernst — who were chairmen of the Senate Values Action Team. “[They] are supposed to be leaders on behalf of faith, family, and freedom. And by ‘family,’ I mean the traditional family — the one that has stood the test of time for thousands and thousands of years and stand up for faith and religious freedom.”

Just because five unelected judges on the Supreme Court turned their backs on thousands of years of human history doesn’t mean we have to, Roy urged. And why on earth would we take our cues from a handful of misguided judges in the first place? “We the people decide what the law of the land is. And we live under certain truths that are, of course, given to us by our Creator. It doesn’t matter that the court said, ‘Oh, sorry. Yeah. Under the equal Protection Clause of the United States Constitution … you must allow marriage to look like this, something that is not one man and one woman.’ …That doesn’t mean we should sanction it or agree with it. It doesn’t mean that you, as a representative of the people, should go in and vote to codify it, expand it, extend it. And you shouldn’t. You certainly shouldn’t hang your hat on what five judges may or may not do to protect your God-given religious liberty.”

At the end of the day, Roy warned, “supporting this bill would force every state in the union to recognize whatever definition of marriage California comes up with. … This is insane. And we should stop it.”