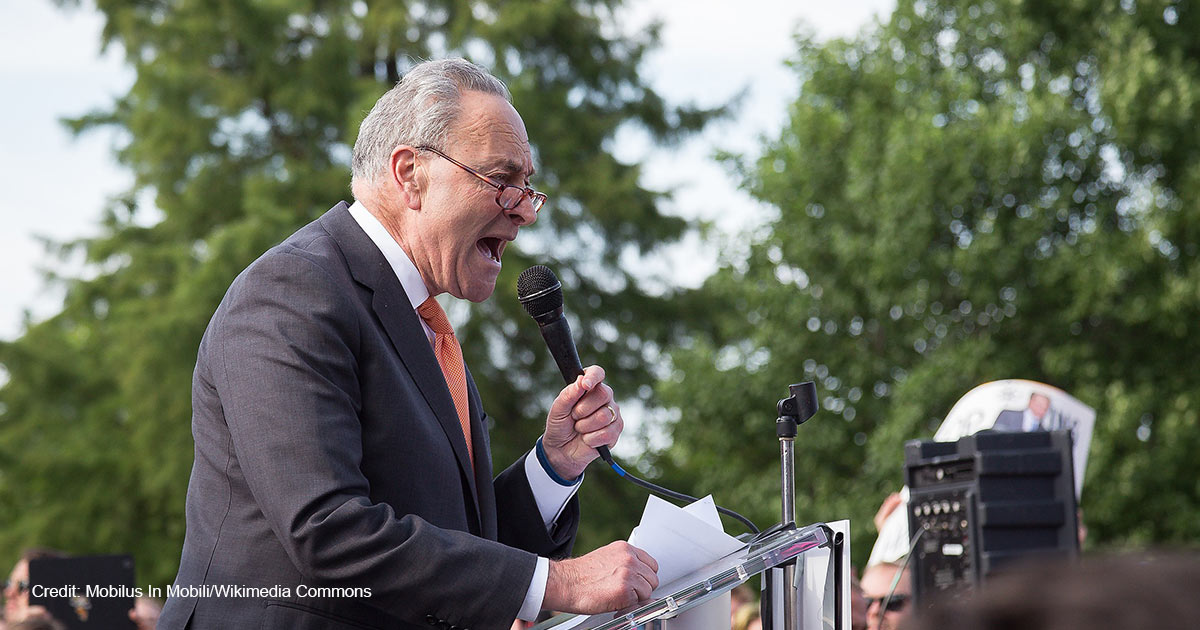 Schumer: Georgia Runoff Win Would Make It ‘A Lot Easier to Get Things Done’

Senate Majority Leader Chuck Schumer (D-N.Y.) made the case Monday on MSNBC for why it will be “a lot easier to get things done” for Senate Democrats if their party wins the Georgia runoff election. Having that one additional vote enables the party to confirm more progressive nominees, pass legislation more quickly, and exercise subpoena power, he said.

After the 2022 midterm election, Democrats hold 50 U.S. Senate seats, while Republicans hold 49 seats. No candidate received 50% of the vote in Georgia, which means that Democratic incumbent Raphael Warnock and Republican challenger Herschel Walker proceed to a December 6 runoff election to determine control of the final seat. While Democrats have won control of the Senate with 50 seats plus Vice President Kamala Harris’s tie-breaking vote, Schumer said having a 51st vote would make his job much simpler.

The U.S. Senate has operated under a power-sharing agreement since the 2020 election, when both parties won 50 seats. Under this agreement, parties sat in equal numbers on committees, which meant that legislation could not pass out of committee without a bipartisan majority. However, Democrats — who held the tiebreaker — could still move legislation deadlocked in committee by bringing a motion to discharge from the Senate floor.

The runoff election will not determine Senate control and will select only one out of 100 senators, but “it’s not 1% difference,” Schumer said. “It’s very different, for the better.” One reason Schumer mentioned is controversial — uber-progressive — nominees. Under the current system, if they got “a vote out of committee that’s 10-10 that’s tied, it delays things for a week. You have to go to the floor, you have to get the time, and you have to bring Kamala Harris there and do what’s called a motion to discharge out of committee.” But advancing nominees would proceed much more smoothly “If we have 51” votes, Schumer promised. “There will be no more motions to discharge.” With an absolute majority of Senators, Democrats could reasonably assign themselves a majority of committee seats, too. “It will mean appointees and judges will get appointed much more quickly,” said Schumer.

Progressive nominees can harm families, religious freedom, and unborn babies both now and into the future. In the near term, radical administration officials like Rachel Levine, assistant secretary of Health and Human Services, can push the Biden administration’s radical transgender agenda. But the more far-reaching impact will be through progressive judges, who can retain their positions for decades. A decade ago, progressive judges were striking down state marriage laws and whacking pro-life laws with Roe v. Wade. The number of progressive judges has grown even more urgent now that the overturn of Roe v. Wade has returned control of abortion policy to the people’s elected representatives. And it has become critical as states seek to protect children from harmful gender experimentation — judges have blocked the first two state laws passed to prohibit gender transition surgeries on children. If the Democrats win the Georgia runoff election, that 51st seat will automatically wipe away major procedural hurdles to approving progressive federal judges.

Schumer continued, “The second thing it does is you can get different bills out of committee much more quickly.” This is because the same procedural roadblocks will be removed. However, over the past two years, getting bills out of committee was not the greatest obstacle to Democrats passing legislation; that could only delay bills by a week or so. What stymied their agenda most is intra-party discord, with less progressive members like Senator Joe Manchin (D-W.Va.) digging in their heels against excessive spending schemes such as the Green New Deal or the Build Back Better plan. “When you have 50 senators … obviously, any one senator can say, ‘I’m not voting for it unless I get this, this, or this,’” Schumer explained. “When it’s 51, it’s harder to do.” Having one extra seat will strengthen Schumer’s hand in negotiating against reluctant members of his caucus; he can threaten, cajole, and play them off against one another, since he can afford to sacrifice one Democratic vote and still pass legislation. Gaining an extra Senate seat would be Advil to Schumer’s biggest headache.

Majority Leader Chuck Schumer helpfully clarified the stakes in the Georgia runoff election. It won’t determine control of the Senate; Democrats hold that either way. But it will give the Democrats vital breathing room and smooth their path to confirming progressive judges and administration officials, passing radical legislation, and pursuing partisan investigations. At least Georgia voters now know how matters stand.