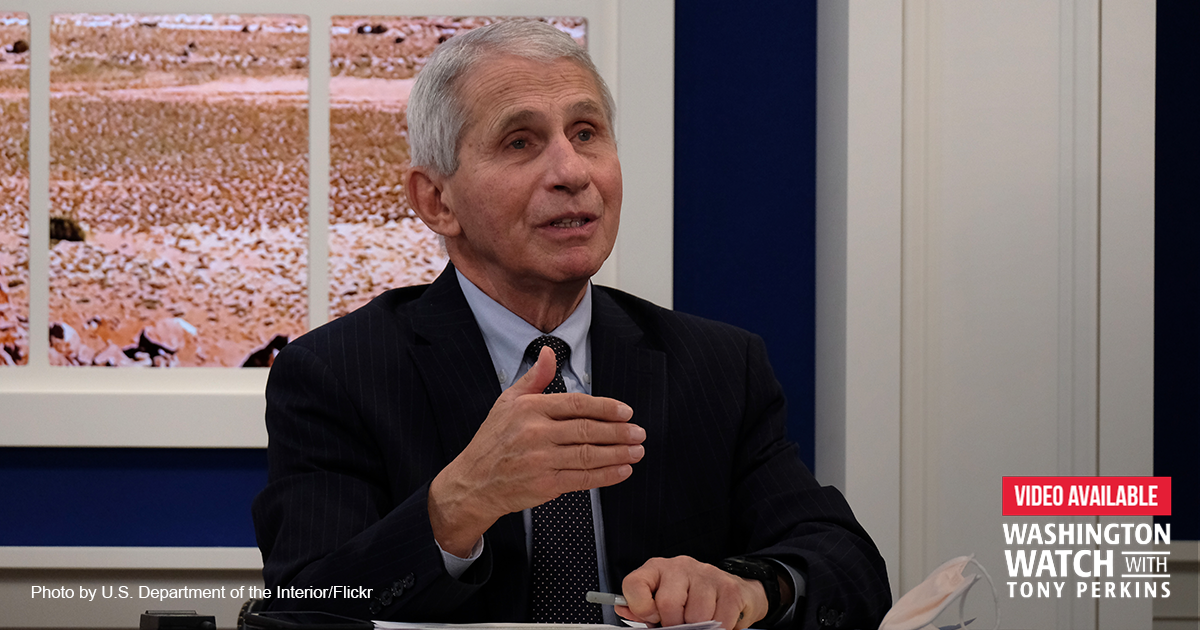 A usually hum-drum budget hearing turned fiery last Wednesday when Representative John Moolenaar (R-Mich.) took Acting National Institutes of Health (NIH) Director Dr. Lawrence Tabak to task over special payments made over the past 10 years to Dr. Anthony Fauci, Dr. Francis Collins, and other officials. NIH oversees distributing federal grants for scientific research, and many of the payments seemed to come from the same major pharmaceutical companies that received those grants.

“The idea that people get a financial benefit from certain research that’s been done and grants that were awarded, that is, to me, the height of the appearance of a conflict of interest,” argued Moolenaar. In response, Tabak had to admit, “I certainly can understand that it might seem as a conflict of interest,” but he insisted it’s all perfectly legal.

The revelations came from documents obtained by Open the Books, a group that investigates government corruption. “In September 2021, OpenTheBooks.com filed FOIA [Freedom of Information Act] requests with NIH asking for a complete list/database of all personal royalties paid to current and former National Institutes of Health employees for work done while they were federally employed,” the group said.

Obtaining the documents wasn’t so simple, however. “NIH failed to comply with this request, so we partnered with Judicial Watch to sue for these documents in October 2021,” they continued. Filing a FOIA request is a standard practice for members of the public and government watchdogs to gain insight into the workings of otherwise unaccountable executive agencies. Complying with them should be routine; yet the NIH simply refused to acknowledge this request until they were brought to court.

Open the Books added, “the documents we have received so far have been heavily redacted, only revealing most (but not all) of the names of the researchers receiving payments, how many payments they received, and how much money each NIH institute has collected in royalties.” They asked for more specific information, including the value of each payment, and who the money was from. According to the information received so far, for instance, NIAID Director Dr. Fauci has received 23 payments, but there’s no telling how much he received in total. NIAID has received $9.3 million, but he isn’t the only NIAID official receiving payments. “There is no way to know the payment amount because of how these documents are redacted,” Open the Books complained.

When red-handed government agencies are caught by a FOIA request, they usually try to bury the smoking gun under reams of irrelevant information. In this case, explained Open the Books, “in response to the lawsuit, NIH began producing approximately 300 pages in royalty payments a month, starting in February 2022.” Yet they still found it necessary to redact critical information, including who was making the payments and how much each official received.

So far, Open the Books has received records for FY2010-FY2014 (they requested documents for the decade 2010-2020). These documents show 1,675 scientists receiving 22,064 payments. “21 of NIH’s 27 institutes and centers reported royalty income, along with the FDA. … Four institutes reported income that was redacted.” Even with this undercount, Open the Books calculated the total amount paid at $134 million, increasing each year to an annual $35 million. These cushy kickbacks are on top of the taxpayer-funded salaries these same officials received.

Financial stakes at NIH have been as hazy as the case for masking on airplanes, since at least 2005. That year, the Associated Press, which I’m told once did journalism, obtained FOIA documents demonstrating the NIH received $9 million in annual royalties, which was paid out to officials including Dr. Anthony Fauci. According to the British Medical Journal (BMJ), Fauci claimed he was “required by law to receive part of the payment,” but felt it was “inappropriate,” and so donated the whole payment to charity. Dr. Fauci’s trustworthiness is well-known.

In 2005, NIH also told BMJ they would not post information about royalties on their website and refused to disclose royalty payments without a FOIA request. Yet when Open the Books made such a request, that’s exactly the information they redacted. “Classic Washington bureaucracy,” remarked Mark Tapscott, Washington reporter for The Epoch Times. “Over the past 20 years the HHS has proven it is in no rush to make financial disclosures at the agency more transparent.”

Tapscott added, “the NIH is being very, very close-mouthed about who is making the payments.” The AP’s 2005 investigation suggested that it was “predominantly pharmaceutical companies” paying royalties to government scientists, said Tapscott. But after the NIH’s disastrous handling of alternative COVID treatments — going so far as to shut down all discussion about their efficacy — public trust in both government health officials and giant pharmaceuticals is at an all-time low.

While willing to admit that there appears to be the potential for a conflict of interest, the NIH seem curiously unwilling to either introduce transparency or resolve the issue. Either the NIH and official decision-makers don’t mind the public generally thinking of them as greedy and corrupt, or they have something to hide. Most people generally prefer the good opinion of others.

Tapscott said many Republicans in Congress are calling for an investigation, while the Democratic offices he tried to contact had no comment. “So if something is going to be done, it probably won’t be done in this Congress,” he said. But “if I was working at NIH and getting royalties, I’d be really concerned about 2023.”