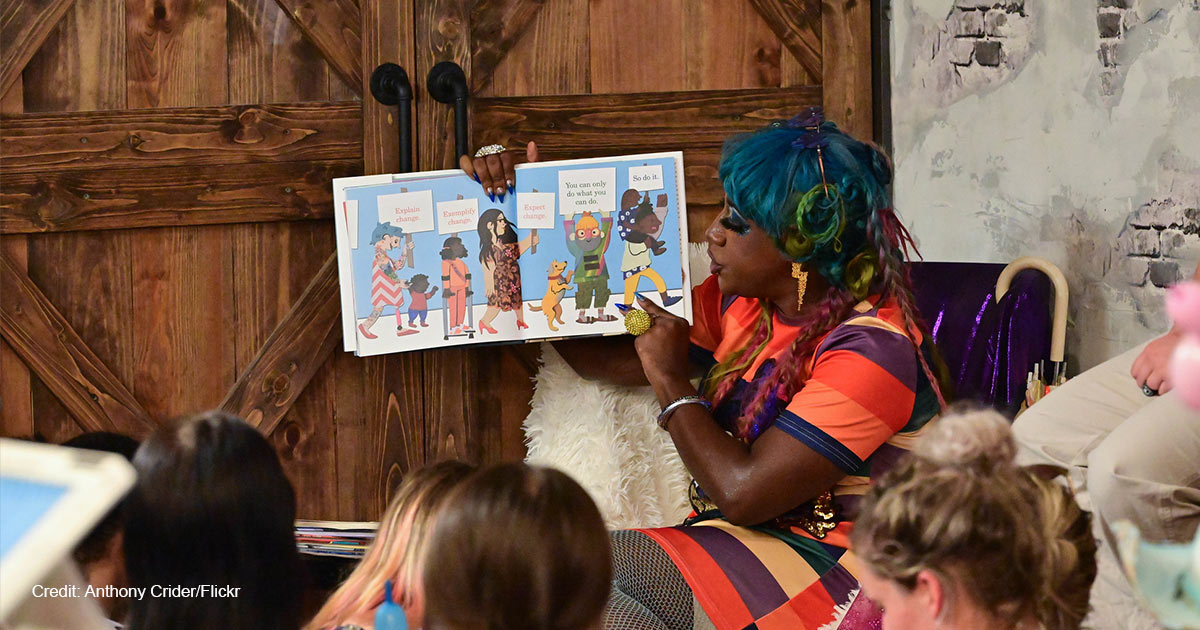 A publicly funded state teachers union hosted a drag queen story hour for children at its convention last week. The New Jersey Educators Association (NJEA), which skims millions of dollars directly from property taxes and “is by far the biggest political spender in New Jersey,” directly promoted woke political topics for the classroom at its 2022 convention. In addition to featuring “Drag Queen Entertainment” for elementary school children, the convention also featured professional development sessions on “LGBTQ inclusive lessons: planning for change” and “creating a safe and brave anti-racist classroom.”

The NJEA has used their political clout to influence New Jersey’s “Transgender Student Guidance for School Districts.” Under the guidance, “A school district shall accept a student’s asserted gender identity; parental consent is not required. … There is no affirmative duty for any school district personnel to notify a student’s parent or guardian of the student’s gender identity or expression.” They specified that students need not “meet any threshold diagnosis or treatment requirements” or have a “legal or court-ordered name change” for school districts to indulge the student’s fantasy. “All school districts” were required to “review and update their existing policies and procedures” to comply with the new guidelines.

New Jersey parents in Lawrence Township raised their concerns about the implementation of this policy during an October 19 school board meeting. “[The transgender] policy overrides parents’ judgments about whether or not gender transition is in their child’s best interests and takes this decision away from parents without even an attempt to prove that parents are unfit to make that decision,” said one parent. “This is blatantly against the constitutional rights of parents.” Another parent said the “super woke progressive agenda” was “so saturated with race and sex. … Can we just get back to teaching?”

In response, a lawyer for the school board defended the district’s gender curriculum, which includes lessons about a “gender snowperson” and books normalizing children who identify as LGBT. Parents don’t have the right “to dictate what their children are taught,” said the school district’s lawyer John Comegno. “If your students attend these awesome schools, they’re going to be instructed in this curriculum, which is consistent with state learning standards.” Comegno said that parents who didn’t like the curriculum could take their children elsewhere. In a state like New Jersey that lacks school choice provisions, not every family can afford to pay for their children’s education twice — once through property taxes and again for private school tuition.

New Jersey is not the only state or local government that officially sanctions teacher-led efforts to expose children in primary school to LGBT and other inappropriate sexual content. Drag Story Hour NYC has organized 49 drag programs in 34 public elementary, middle, and high schools since January, and has earned $207,000 in city contracts since 2018 for events specifically targeting children as young as three. Center City Philadelphia also imported drag performers to a first-grade classroom. In Colorado, a teacher invited a 12-year-old girl to an “art” club, the Genders & Sexualities Alliance (GSA) club, where she was informed “that if she is not 100% comfortable in her female body, then she’s transgender” and advised to keep the club a secret from her parents.

But some state legislators recognize this sexualization of children for the civilization crisis that it is. Tennessee Senate Majority Leader Jack Johnson (R) has introduced a bill, SB 0003, to criminalize drag show performances for children. According to the bill, anyone who “engages in an adult cabaret performance on public property or in a location where the adult cabaret performance could be viewed by a person who is not an adult” would face a misdemeanor charge for a first offense and a felony charge, punishable by up to six years in prison, for a repeat offense.

Other states are responding to alarming incidents, too. In Texas, Representative Bryan Slaton (R) announced plans to file “legislation to defend kids from being subjected to drag shows and other inappropriate events” after a Dallas drag event advertised as family-friendly featured suggestive dancing and explicit music. Arizona Senate Republicans have also pledged to work on “legislation that prohibit minors from attending drag shows” after a similar incident where children attended a “family-friendly” drag event that turned out to be risqué.

Two sets of states are going in polar opposite directions on sexualizing children. Some states are working to prevent children from being exposed to harmful sexual content at an early age. But other states not only permit it; they are using public funds to import gender-bending sexual performers into classrooms, as if such exposure is an essential part of an elementary school education. For such obviously problematic presentations to impressionable young minds, its clear that the LGBT ideology, and its radical agenda, has displaced every other sound policy consideration in some states. Parents must let those who make education policy in these jurisdictions know there will be consequences. “Whoever causes one of these little ones who believe in me to sin, it would be better for him if a great millstone were hung around his neck and he were thrown into the sea,” said Jesus (Mark 9:42).

At the same time, those legislators who are willing to stand up and take the LGBT lobby’s fire to protect children must be commended and encouraged for the good work they are doing.