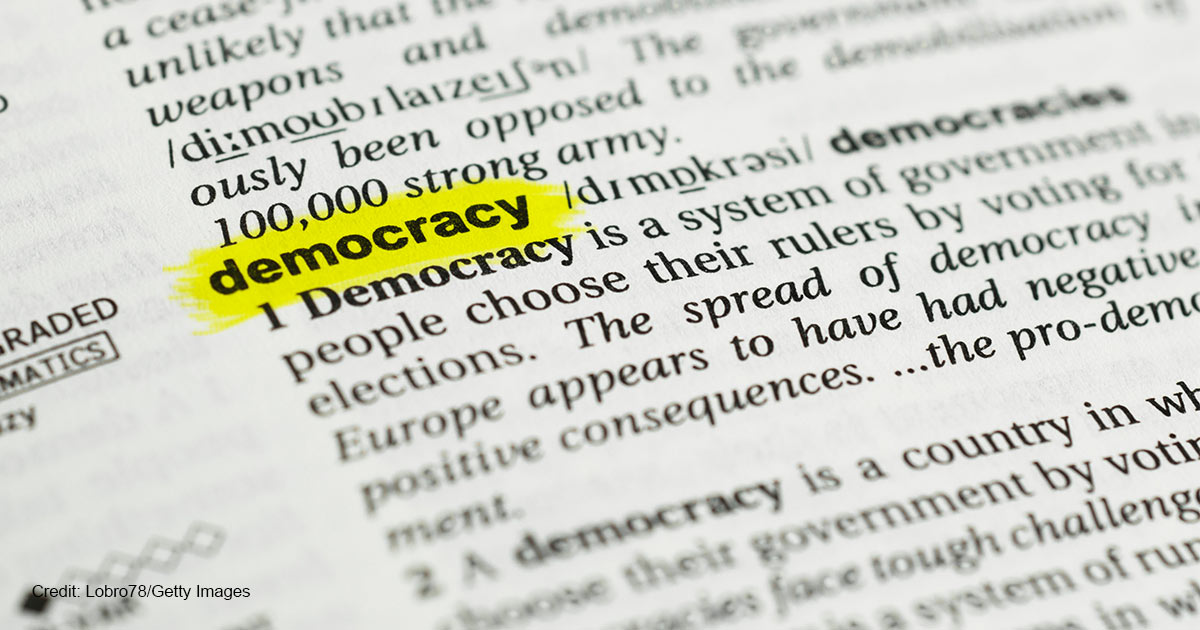 The Threats to ‘Our Democracy’

It has become quite common to hear of threats to “our democracy.” But what does this mean?

First, America is not a democracy. The Founders of our country were frightened by the prospect of democracy. They believed that the will of the simple majority of the people, unmediated by considered judgment and prudent deliberation, would lead to the oppression of those who dissented from it. As James Madison wrote in the Federalist papers, “Democracies have ever been spectacles of turbulence and contention; have ever been found incompatible with personal security or the rights of property; and have in general been as short in their lives as they have been violent in their deaths” (Federalist 10).

This was not a passing concern. Decades later, John Adams reminded his friend John Taylor that “democracy never lasts long. It soon wastes, exhausts, and murders itself. There never was a democracy yet that did not commit suicide.”

If 50% plus one can have whatever they want, the rest of the people become subjects. And if this kind of popular democracy became the norm, demagogues and political adventurers, skillful in the art of mass manipulation, would gain permanent traction.

At the same time, the statesmen who crafted the Constitution believed deeply that people possess the right of self-government. Their Judeo-Christian understanding of human dignity required this belief. As the image-bearer of God, man has the right and duty to live freely before his Creator and his fellows without undue interference from any government.

Yet they also understood that we are fallen beings, that no human effort can create a millennial paradise. “We must take human nature as we find it; perfection falls not to the share of mortals,” George Washington wrote to John Jay in 1786. This understanding made them extremely leery of immediate, unfiltered, majority-rule governance.

So, the men who met in Philadelphia in 1787 crafted a remarkable compromise. Americans would govern themselves — but do so through those they elect to represent them. This representation was designed to create a cooler political temperature, one less responsive to passionate demands and more careful about its legislative and policy decisions.

Additionally, government would be heavily qualified by distinct branches of the federal government and myriad state, county, and local governments. The Founders envisioned that these would mutually support and continuously temper one another.

Our system has worked imperfectly. Government and its leaders have failed far too often. Yet representative self-government is what has made our country a republic, one in which the goal of liberty and justice for all is not just a schoolroom recitation but an aspiration more fully realized in America than any other nation on earth.

With all of this said, threats to representative self-government exist. Here are three:

The ongoing effort of the Left to compel compliance with its agenda, seen most strikingly in the actions of LGBTQ activists, has created enormous cultural unrest. To disagree is not to hate, yet when disagreement is cast as a form of severity and bigotry, the social fabric is torn.

A second threat is the desire of the Left to make the Supreme Court a vehicle for ideological enforcement. Unconcerned with judicial independence or fidelity to the Constitution, they want the court to be a super legislature. Disliking what the peoples’ legislature — the House and Senate — does or doesn’t do, they look to the Supreme Court as the means of achieving their goals. When the court falls along conservative lines, their solution is not to persuade the people but pack the court.

A third threat is the loss of personal virtue. In 1960, the novelist Walker Percy, in his great work “The Moviegoer,” wrote, “Our national character stinks to high heaven. But we are kinder than ever.” What Percy is saying is that we are a people that feels things deeply — the nation rallies when there’s a hurricane or when a child falls down a drainpipe — but these moral instincts are insufficient for sustaining honor, integrity, ethical self-discipline, loyalty to family, and appreciation for our many and great blessings.

The loss of virtue makes us susceptible to emotional appeals and the generous “compassion” of the government, which are the stock-in-trade of both charlatans and radicals.

Writing in the context of the stain of slavery, Abraham Lincoln said in 1854, “Our republican robe is soiled and trailed in the dust. Let us repurify it. Let us turn and wash it white in the spirit, if not the blood, of the Revolution … Let us readopt the Declaration of Independence, and with it the practices and policy which harmonize with it.”

Slavery is now, thankfully, in the wastebasket of history. But no republic can long endure when its citizens are so easily misled and quick to accept arguments made with great feeling but abysmal reason and ignorance of historical fact. Including the idea that a non-existent democracy is a risk.