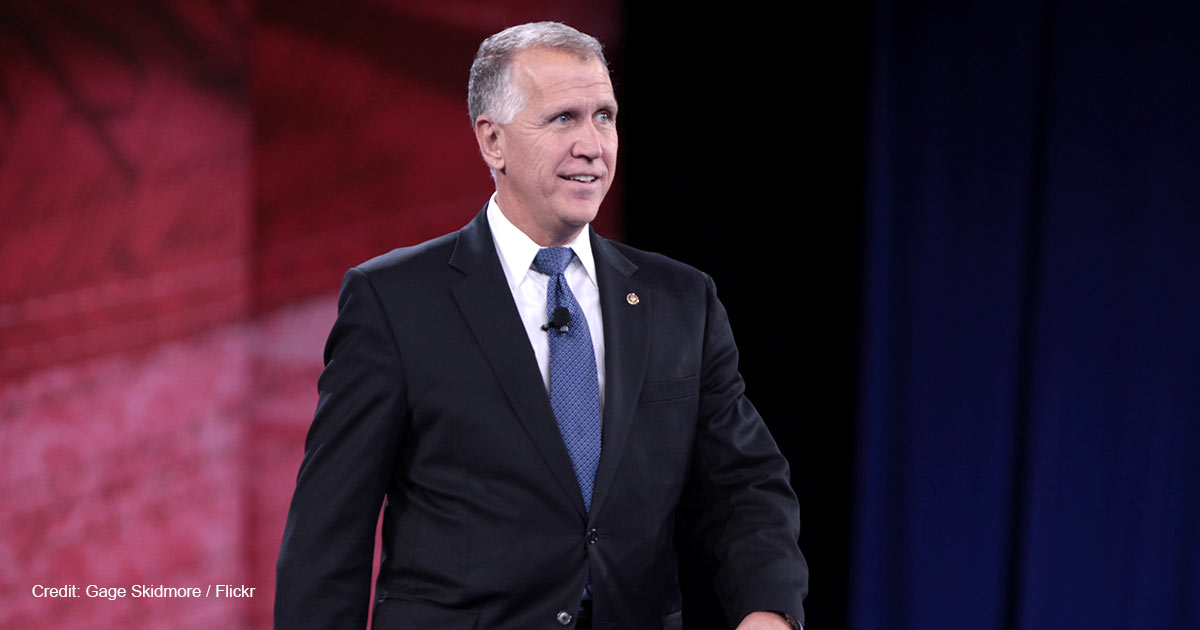 The Tillis Turnaround: How a Pro-Marriage Senator Turned His Back on Marriage

Last week, Americans witnessed a disturbing vote in the United States Senate as 12 Republican senators joined all 50 Democrats in voting for cloture on the so-called Respect for Marriage Act. If passed, this bill would repeal the bipartisan Defense of Marriage Act and codify same-sex marriage into federal law. One of the most interesting storylines is Senator Thom Tillis (R-N.C.), who was eager to vote for the bill and quickly dismissed religious liberty concerns in his floor speech. But we need only look back 10 years ago to find a very different Thom Tillis.

Tillis was first elected to the North Carolina House of Representatives in 2006. In 2011, he was selected as speaker when Republicans gained control of the chamber for the first time since 1998. With some Democratic support, Republicans were able to pass several bills over then-Democratic Governor Beverly Purdue’s veto. One of those was Amendment 1, a constitutional amendment that would define marriage as the union of one man and one woman in the North Carolina Constitution. Ten House Democrats voted in favor of placing Amendment 1 on the ballot. Then-Speaker Tillis played a key role in pushing Amendment 1 through the N.C. House of Representatives. On May 8, 2012, Amendment 1 passed with over 61% of the vote.

In October 2014, an Asheville district court judge ruled Amendment 1 unconstitutional. Democrat Attorney General Roy Cooper declined to further defend the amendment earlier in the summer after a federal appeals court ruled a similar amendment in Virginia to be unconstitutional. Then-Republican Governor Pat McCrory disagreed with the ruling but pledged to enforce it. But Tillis and Senate President Pro Tempore Phil Berger announced that they would appeal the decision further, strongly stating, “While we recognize the tremendous passion on all sides of this issue, we promised to defend the will of North Carolina voters because they — not judges and not politicians — define marriage as between one man and one woman and placed that in our state constitution. It is disappointing this decision was made without North Carolina’s law receiving its day in court, and we will continue to work to ensure the voice of the voters is heard.”

In a U.S. Senate debate that month with incumbent Democratic Senator Kay Hagan, Tillis declared, “I feel it is my responsibility, after 60% of the people voted that into law, to defend the laws of the state.” Tillis went on to defeat Hagan in the 2014 U.S. Senate election.

Just months after his election to the U.S. Senate, Tillis joined 10 other Republicans to endorse Social Security and veteran benefits for same-sex couples. And now, seven years later, his evolution is seemingly complete as he joins Senators Baldwin (D-Wisc.), Susan Collins (R-Maine), Rob Portman (R-Ohio), and Kyrsten Sinema (D-Ariz.) to push the Respect for Marriage Act through the Senate and onto President Joe Biden’s desk.

In his floor speech before the vote, Tillis falsely claimed that the Respect for Marriage Act would protect the religious freedom of those who hold to a natural view of marriage. But this bill does no such thing. In fact, in its current form, the Respect for Marriage Act only protects institutions from penalties if they refuse to perform a same-sex wedding ceremony. It does nothing to protect faith-based schools, colleges, adoption agencies, or charities that hold to a natural view of marriage. It does nothing to protect parents who object to same-sex curriculums being taught in their child’s school. It does nothing to protect individuals who seek to operate their businesses according to their deeply held religious convictions that marriage is between one man and one woman.

On the contrary, the Respect for Marriage Act creates a private right of action that will subject individuals to costly litigation because of their belief in natural marriage. Additionally, it will severely jeopardize the tax-exempt status of non-profit organizations.

I met Senator Tillis back in 2011 during the fight to get Amendment 1 on the ballot. His desires seemed genuine, and I was impressed with his resolve to pass the amendment over our Democratic governor’s veto so that voters could have a say in the matter. And when most statewide elected officials capitulated to the ruling of one judge who overruled the will of 1.3 million North Carolinians, Thom Tillis was one of the few who continued to stand in the gap and fight for our voice to be heard. As a native North Carolinian, I supported his U.S. Senate campaign in 2014 after he became the nominee, because I believed this was the leadership we needed. What a difference a decade makes.

It’s also important to point out that Tillis and his 11 other Republican colleagues are in direct violation of their party platform which specifically describes the American family as “the foundation of civil society” and that “the cornerstone of the family is natural marriage, the union of one man and one woman.”

Our government has no business picking winners and losers, especially favoring one worldview over another. Research clearly shows that societies flourish when the nuclear family is strong. Natural marriage encourages economic prosperity and is the best environment for children to thrive and be happy. Same-sex homes do not provide stable environments for children because they exclude a mom or a dad by their very nature. For the sake of children and our society, the government certainly has a compelling interest in promoting natural marriage.

There is still time to stop the Respect for Marriage Act from becoming law. Senator Mike Lee (R-Utah) is spearheading an effort to alert his Republican colleagues of the bill’s inherent dangers to religious liberty. At the very least, we want to see Senator Lee’s amendment included in the bill so it adequately protects religious liberty. There will be two more 60-vote thresholds to clear before this bill goes to a final vote. That means we only need to peel off three Republican senators to defeat the Respect for Marriage Act.

Marriage was ordained by God in the Garden of Eden and is the only way civilizations have survived ever since. Scripture is clear that sin has consequences, and those consequences are abundantly clear for those in same-sex relationships. We can’t truly love people as God intended if we affirm what will harm them. As Al Mohler recently wrote, “Anyone who would redefine marriage, the most fundamental building block of society, is no conservative, no friend of the natural family, and no defender of family values.” And I would add that they are in no way the great defenders of religious liberty that they purport to be. Contact your two U.S. Senators today and urge them to oppose the Respect for Marriage Act. The future of the American republic depends on it.