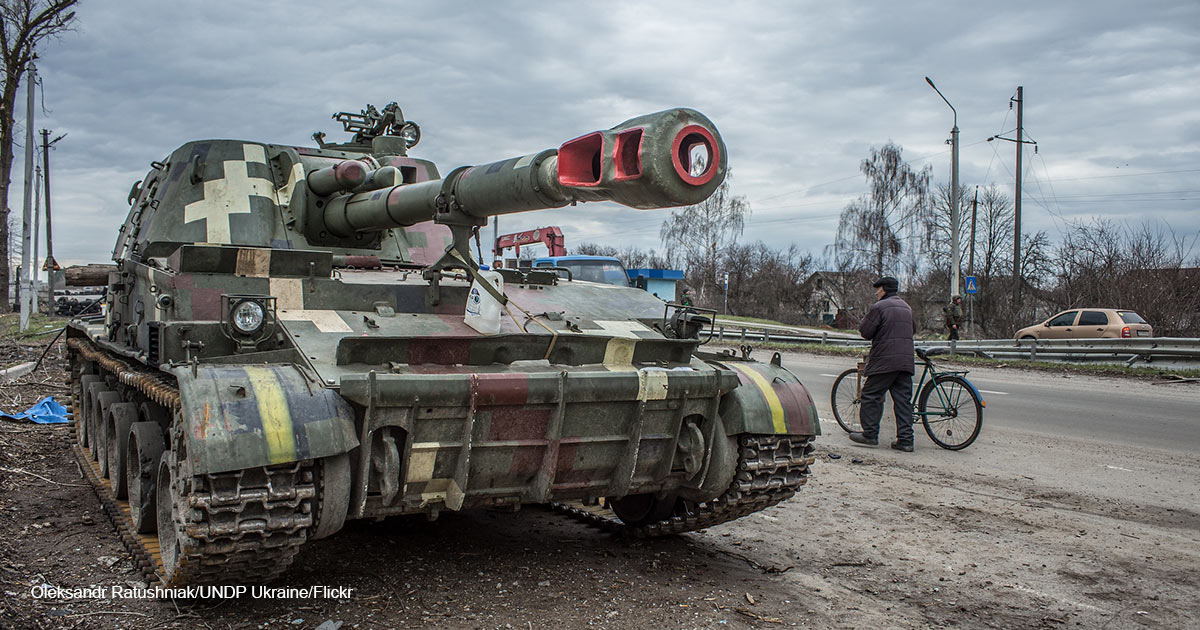 Russia is moving a train possibly laden with nuclear munitions toward the Ukrainian border, according to Russian propaganda released earlier this week, raising speculation that President Vladimir Putin may attempt to turn the tide of his failing invasion of Ukraine by launching a tactical nuclear device. Putin warned in late September, “If the territorial integrity of our country is threatened, we will without doubt use all available means to protect Russia and our people — this is not a bluff.”

Of course, there’s very little threat that Ukraine’s military will attempt anything as foolhardy as the invasion of Russia — a proverbially disastrous proposition for would-be conquerors. But when has Russian propaganda been on the level? That isn’t what Putin meant.

Rather, Putin now insists that certain parts of Ukraine now belong to Russia. He claimed Friday that Russia would officially annex four Ukrainian regions, Kherson, Zaporizhzhia, Donetsk, and Luhansk (from south to east), creating a “land bridge” to the Crimean peninsula, which Russia annexed from Ukraine in 2014. When Putin threatens to employ nuclear force to defend Russia’s “territorial integrity,” he includes the Ukrainian territory he now claims belongs to Russia — including territory Russian forces have never captured from Ukrainian forces.

In fact, after weathering the storm of Russia’s initial blitz, Ukraine’s military is increasingly taking the offensive, recovering all the territory Russian invaders occupied in the north and northwestern offensives this spring. In mid-September, Ukraine recaptured thousands of square miles of territory around the northwestern city of Kharkiv in a single weekend. The only Ukrainian soil still occupied by Russian troops is in the southern and eastern regions, in the regions Russian claims to have annexed.

Even this substantial foothold, approximately 15% of Ukraine’s land area, is eroding away from them. For months, Russia was grinding forward in the eastern regions of Donetsk and Luhansk (largely with superior artillery firepower), where Russia-backed separatists had held territory since 2014, but even that advance has stalled out. Ukrainian President Vladimir Zelenskyy announced on Sunday, “The Ukrainian flag is already in Lyman, Donetsk region,” which Ukraine’s Defense Ministry explained, “commands a key road crossing over the Siversky Donets River, behind which Russia has been attempting to consolidate its defenses.” Ukrainian forces recaptured the city after Putin declared it was now part of Russia. In the south, too, Ukrainian forces are pressing towards Kherson, the first regional capital Russia occupied during the war.

The counterattacks demonstrate the turning tides of the war, which Russia expected to end quickly when it blitzed towards Kyiv, the Ukrainian capital, in February. Since then, mounting losses and logistical failures have forced Putin to revise down his war aims to simply capturing a swathe of Ukraine’s territory. Yet, only days after Putin tried to declare a victory of sorts, Ukraine is recapturing territory that Putin claimed.

However, Putin’s claim to Ukraine’s southern and eastern regions are nothing more than a legal fiction. For one thing, the U.N. Charter, to which both nations are parties, proscribes member nations “from the threat or use of force against the territorial integrity or political independence of any state.” The U.N. secretary-general and many world leaders have already condemned the move. The “finders, keepers” rule is no longer tolerated in international relations.

For another, the “referenda” Russia conducted were farces. As reported by Russia-controlled media, the results from Donetsk were 99.23% in favor of joining Russia, with 97.51% of people voting, highly questionable statistics. The results from Luhansk (98.42% in favor with 94.15% turnout), Zaporizhzhia (93.11% in favor with 85.4% turnout), and Kherson (87.05% in favor with 76.86% turnout) were likewise incredible. In contrast, a classified survey Russia conducted over the summer found public opinion roughly divided. “This is the will of millions of people,” Putin declared. Millions of people are willing to do a lot of things when armed soldiers go door-to-door collecting ballots and even filling them out for residents, but that doesn’t make it a fair and free election, nor legitimate political self-determination.

“It appears to me that Putin is boxed in,” said “Washington Watch” host Tony Perkins. “Russia had really nothing behind all of Putin’s bravado. … He’s lost a lot of credibility.”

Former Secretary of State Mike Pompeo agreed. “They have clearly been diminished in their own eyes and in the eyes of the world. And I think Vladimir Putin now is trying to figure out, how do you maintain some space, some respect?” he remarked on “Washington Watch.” That’s why Putin is threatening to escalate the war with a nuclear weapon, not to mention annexation, said Pompeo. “I hope the administration has communicated very clearly, privately, to the Russians precisely what will be imposed upon them, what the cost will be, if they should head down that path.”

On the other hand, Pompeo said the U.S. should leave a diplomatic option open, too. “We have to both create diplomatic space, but also be clear about our continued resolve to defend the Ukrainians,” he said. If Putin has no way out but victory, he will have nothing to lose with any escalation of the conflict, and will go to unthinkable lengths to achieve victory. Soldiers fight all the more fiercely for their lives when they are confident they will receive no quarter. So, as much as we may loathe the idea, America must offer Putin another way out. “I think [Ukrainian President] Zelensky has said this will end in the form of a diplomatic outcome,” Pompeo continued, “but it needs to be made clear to Vladimir Putin that he can’t use these nuclear tools.”

In the meantime, Ukrainian battlefield successes are also taking geopolitical conquest off the table.