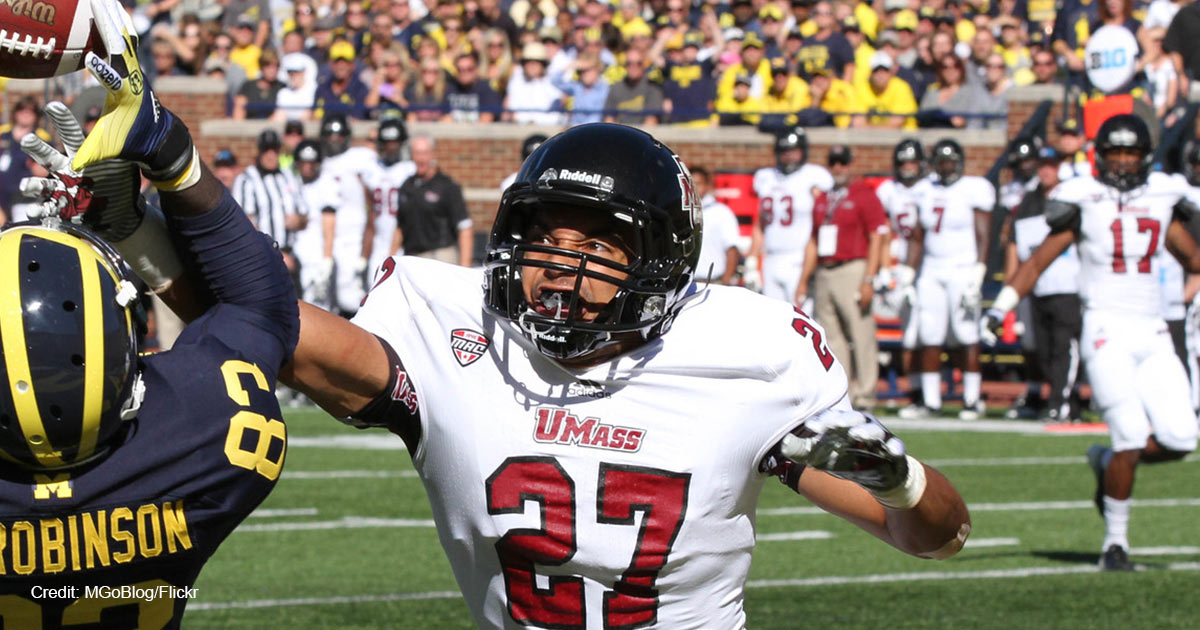 The Liberty University football team thinks they are coming to the University of Massachusetts to play football on October 8, but it appears that the home team has organized another type of confrontation for that day.

Rather than focus on football, UMass is turning the game into a proxy religious battle between Liberty’s biblical values and UMass’s radical sexual ideologies. The UMass Minutemen have intentionally scheduled their game against Liberty to coincide with their university’s Pride Day and are encouraging fans to make the most of this unique opportunity to taunt and demean their opponents who are committed to natural sexual roles and values.

UMass promulgated news of the Pride Day match-up by means of an online special announcement that seems deliberately designed to antagonize Christians. The video embedded in the announcement shows a UMass football player promoting the event by wearing a prominently displayed gold cross around his neck while surrounded by rainbow lights. Several LGTBQ activists took to social media to commend UMass’ trolling of Liberty University.

Liberty is a Christian university located in Lynchburg, Virginia that requires its students to adhere to the Liberty Way, the university’s honor code. Among other things, the honor code states that “sexual relations outside of a biblically-ordained marriage between a natural-born man and a natural-born woman are not permissible at Liberty University.” The Liberty Way further specifies that “statements and behaviors that are associated with the LGBT lifestyle are prohibited [as well as] romantic displays of affection with a member of the same-sex ... and actions confirming denial of biological birth sex...” This is what the UMass leadership finds so objectionable and is going out of their way to provoke and ridicule.

Many were jubilant when the news spread on social media about the October 8 match-up and expressed glee at UMass’s intentional provocation and demeaning of its guests. The Minutemen football program is capitalizing on this sentiment by promoting a special Pride Day offer which includes a ticket to the game as well as a free Pride Day trucker hat to commemorate this unique event.

“UMass is mocking our beliefs and values. It is really disrespectful and making people uncomfortable,” observed Liberty sophomore Summer Stubblebine, a Politics and Policy major from Lincoln, Mass. “We have hosted speakers from different sides of the political aisle at Liberty and are very respectful of other people with differing beliefs. Our teams are known for great sportsmanship. Unfortunately, UMass is taking something that is not supposed to be political and making it political.”

Jonathan Alexandre, a Liberty Law School grad from Brockton, echoed this sentiment, saying, “Liberty students and alumni travel the world and encounter countless situations like this, designed to make them feel uncomfortable. Yet they’ve maintained a reputation of respectfully and graciously engaging on contentious cultural issues every time. Expect the same on October 8th at UMass.” Alexandre also reflected on the impact on Christian students at UMass who hold to the same beliefs as their fellow believers at Liberty. “UMass ought to be more concerned with many of its own students who don’t want their student fees used to prop up a hyper-sexualized social and political agenda with which they fundamentally disagree.”

While the Liberty Flames did not pick this fight, it is likely that they will finish it in the end zone. Liberty’s football team has a winning record and a schedule that includes games against perennial power houses such as Virginia Tech and opponents that are ranked in the top 25 nationally. Meanwhile, the UMass Minutemen have a record of 1-3, and Liberty is set to be one of the more difficult opponents they face this season.

Andrew Beckwith is president of the Massachusetts Family Institute.