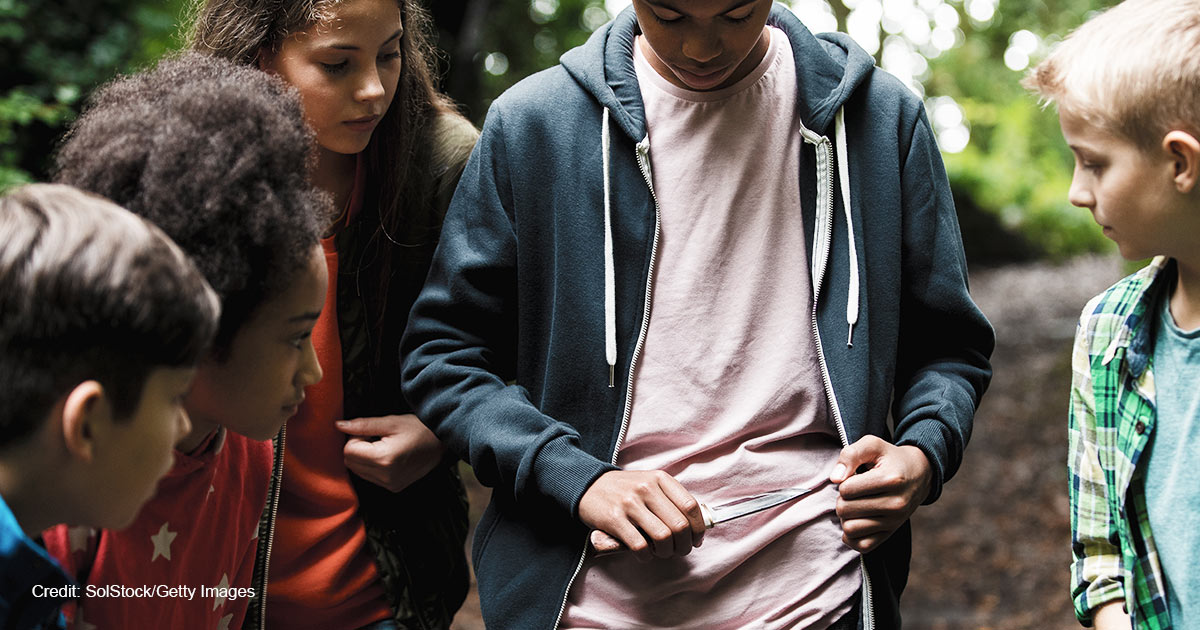 Isreal Akingbesote showed up for work at a gas station in Clinton, Maryland on an August evening much like any other. But this night would be different; he would never return home again. That night, two boys, a 15-year-old and a 12-year-old, entered the store and attempted to steal soft drinks. When Akingbesote confronted them, they stabbed him repeatedly (he would die hours later at the hospital). Prince George’s County Police arrested both boys, who will be charged with first-degree murder. The 15-year-old (but not the 12-year-old) will be tried as an adult.

Stories like these have grown so common nationwide that they are on the brink of becoming mere statistics. From Los Angeles to Philadelphia, children are ganging up to commit crimes like robbery and carjacking. In Washington, D.C., one 13-year-old has already filled out his rap sheet with 11 counts of armed robbery, carjacking, and assault. “I’ve been in law enforcement for nearly 23 years now, and I will honestly say, within the last year or two, it has been the worst I’ve ever seen it regarding our youth,” said Tyree Jones, sheriff of Hinds County, Mississippi, home to the state’s capital in Jackson.

Big cities, small cities, suburban areas — the uptick in juvenile crime does not discriminate. In fact, Prince George’s County, suburb of the nation’s capital, home of Air Force One and the Washington Commanders, may not seem like an obvious hotspot for juvenile crime, yet it is. From August 22 to September 8, juveniles committed three murders, five other shootings, six robberies, and eight carjackings in PG County. “We have seen far too many juveniles committing violent crimes,” lamented Prince George’s County Police Chief Malik Aziz.

Through August, PG County had arrested 430 juveniles for the year, including 84 for carjacking, compared to 92 juveniles arrested for carjacking in all of 2021 (there were 344 carjackings through August compared to 226 in the same period last year). Of those carjackers, half were under the age of 15 and 34 had been arrested before for a violent crime or gun offense. This is not the case of kids making one foolish mistake, being in the wrong place at the wrong time, or turning to crime just before they graduate high school. Rather, they turn to violence at shockingly young ages, they carry guns around with them, and they indulge in crime more than once. This is children becoming hardened criminals.

After August became the county’s deadliest month on record, and nine people were murdered over Labor Day weekend, something had to be done. The county implemented a 30-day nightly curfew for “youth ages 16 and under,” enforced by fines upon the parents. The curfew already existed but was not enforced.

The curfew aimed to address one reason for juvenile crime spike — a lack of parental intervention. Former NYPD commanding officer Joseph Giacalone explained, “The parents aren’t taking care of things. The schools aren’t taking care of things, and then the police have to deal with them. … And meanwhile they had no rearing at home, no discipline at home and at school — and they want to know why kids are acting out.” PG County Executive Angela Alsobrooks made a similar point. “Where are their parents? Where are the aunties, where are the uncles and other family members who are responsible for them?” she asked. “Somebody has to take responsibility for these armed and dangerous children, and it’s not just the police, and it’s not just the government.”

But another factor spurring juvenile crime is a lack of consequences. “Unfortunately, the penalties aren’t scary for these kids,” said Giacalone. Alsobrooks agreed, “At this point, these kids don’t need a hug. They need to be held accountable.” She warned, “Armed carjacking and armed robbery is not innocent behavior, regardless of the perpetrator’s age. The residents of our community deserve both freedom and justice, which includes the freedom to carry groceries into their home, walk the streets, and pump gas without fear of being violently assaulted.” At the same time the curfew took effect, the PG County Circuit Court reassigned the judge who handled juvenile cases “following claims from multiple elected officials that he was too lenient.” The judge had allowed the 12-year-old boy involved in the gas station stabbing to await his trial at home with only electronic monitoring and a safety plan.

These factors are specific to minors, to a certain extent, but all the reasons why crime in general is rising apply to juvenile crime, too. When visible, flaunted lawlessness goes unpunished, a perceived restraint is cast off. The law has lost its respect, and that is hard to win back. Police officers are maligned, vilified, and often attacked. Progressive prosecutors have deliberately refused to enforce the law for ideological reasons, and many people are taking advantage of that. Additionally, we continue to see ripples from the giant fissure COVID lockdowns tore through our society — the idleness, pent-up energy, pent-up rage, and isolation. These factors are provoking both adults and children into crime.

The PG County curfew was such a success that officials have extended it through the holidays. “During the curfew hours, overall crime dropped 20%, violent crime dropped 38%, carjackings dropped 59%, and non-contact shootings or non-fatal shootings dropped 56%,” reported Aziz. With parents incentivized to step in and keep their kids at home, it dramatically reduced the opportunities for youth to commit crimes. After a month, there were only four reported curfew violations. Due to the pace of judicial proceedings, effects of increasing accountability in the courtroom will likely take longer to materialize.

PG County presents an interesting case study on the rise in juvenile crime. For one thing, it is the largest and the second richest majority-black county in the country. Black Americans are “particularly likely to say violent crime is a very important midterm issue,” according to Pew Research, with 81% calling the issue “very important.” Black Democrats are far more likely (82%) than white Democrats (33%) to say it is a top issue. Additionally, the county’s juvenile crime problem, despite its suburban location, signals that this isn’t just an issue faced by inner cities. Local officials everywhere should be vigilant to quash the rise in juvenile crime. Finally, PG County is solidly Democratic (in 2020, Joe Biden received 10 times more votes for president than Donald Trump). Yet even under one-party rule, violent crime is seen as a problem, and local Democrat officials are acting to end it. When push comes to shove, nobody wants their middle schoolers shot at while they’re walking home from school.

Juvenile crime is particularly destructive. Not only is a crime committed, but the youthful offender has severely damaged his own life’s prospects, making bad friends and habits, and entering the system from an early age — not to mention the damage he has done to his conscience. Juvenile crime can often target other children (just imagine if both sides of your own childhood quarrels firearms), making two minor victims instead of one. It affects not only the perpetrator and victim, but also their parents. By affecting children, it impacts those on whom the community’s hopes and dreams lay.

And juvenile crime is particularly tragic because it is so preventable. Simply having stable families that can love, care, and watch over their children will go a long way towards preventing it. Young boys need good male role models to look up to. Virtually no teenager with a strong father figure — who works hard and can resolve his disputes without resorting to violence — is going out on the street with a black-market pistol in his pocket. If only we supported families, we wouldn’t have to spend so many resources to deter juvenile crime because there would be so little of it. Alas, having despised the family, our society must now try young teenagers as adults for murders committed over a bottle of soda.