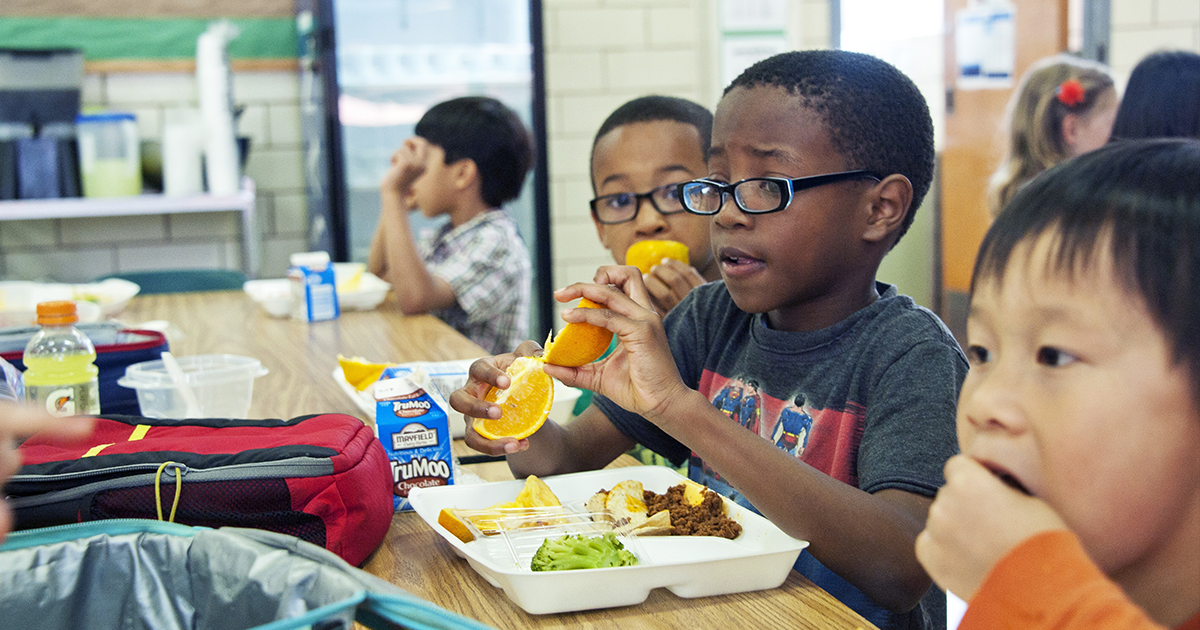 The U.S. Department of Agriculture (USDA) announced plans on Sunday to attach new strings to school lunch money and food stamps. The agency declared its intention to “interpret the prohibition on discrimination based on sex … to include discrimination based on sexual orientation and gender identity,” in both Title IX education policies and Supplemental Nutrition Assistance program (SNAP) benefits, or food stamps.

While Title IX says filing paperwork for a religious exemption is optional, USDA told The Federalist on Tuesday, “Organizations may request a religious exemption by submitting a written declaration to the Secretary of Agriculture identifying the provisions that conflict with a specific tenet of the religious organization.” The Biden administration has a poor record on granting religious exemptions when requested — look no further than military personnel who objected to the COVID vaccine.

To continue receiving federal funding through these food programs (which often provide the only decent meals some children from impoverished homes receive), schools would be required to adopt, for example, a bathroom policy allowing students who identify as transgender to use the restroom of the gender they identify with. No local discretion, no working out of local compromises. All school districts in the nation would be forced to adopt a policy similar to the one in Loudoun County, Virginia, under which a girl was sexually assaulted in the school restroom by a male classmate who claimed to be a girl.

Ah, back to the good old days, when federal agencies threatened to let poor kids starve unless their schools deliberately expose them to sexual assault in the bathroom. Wait, are you saying that’s not normal? Has that ever happened before? Surely, some former administration has steered its food policy toward forcing unwanted sexual policies into elementary schools. This is the Biden administration, after all, the most normal administration ever.

In fact, the only previous effort to force transgender policy on local school districts came in the waning days of the Obama administration, where the Department of Education issued a letter declaring that it would interpret “sex” to include sexual orientation and gender identity. But there was never any formal rulemaking or actions taken against schools, and the policy was soon reversed under the Trump administration.

Biden administration officials plan to follow up the announcement with formal rulemaking later this month, they told The Federalist, but only an expert on the executive branch would be able to tell that from their announcement. The press release contains present-tense language like “USDA and FNS are issuing this interpretation …” which could easily convince a casual reader these guidelines are effective immediately.

But the guidelines aren’t effective yet. Federal law requires federal agencies to pursue a months-long process to legitimately establish new regulations. The process includes issuing a proposed rule, opening a 90-day public comment period, and responding to all the substantive comments they receive before they can issue a final rule, which is then enrolled in the Federal Register. It could be at least six months before a rule becomes effective — if it isn’t delayed further. So why announce the policy as if it is effective for this upcoming school year?

The Biden administration has a good reason for wanting people to think these guidelines are effective (even though they aren’t). Officials in local schools and other relevant community organizations may proactively take steps to comply out of fear that they might lose federal funds. Poorly informed legal counsel may advise them to comply “just to be safe.” At the same time, there is no formal policy in place for lawsuits to target. Thus, the Biden administration can achieve the outcome they want, without the risk that a court will strike down their policy. They used the same tactic on vaccine mandates for private employers, delaying compliance while hoping that companies would go ahead and comply on their own.

It’s a clever idea, but cowardly. It lacks all the bright lines and clear rulemaking of good government. The Biden administration has the legitimate authority to enact legally binding regulations during the period of time for which it was elected. In seeking to extra-legally force compliance by intimidation without a regulation in place, the Biden administration is really tipping a weak hand. It shows they aren’t confident that they could legally establish this policy, so they’re just planning to bluster for as long as they can.

Perhaps this is simply an agency going rogue? Not even close. They expressly tie this announcement to an executive order President Biden issued on his first day in office, in which he ordered all executive agencies to find ways to inject sexual orientation and gender identity into issues where they don’t belong. The buck stops with him.

The USDA also claims the policy is “consistent with the Supreme Court’s decision in Bostock v. Clayton County,” which wrongly redefined sex to include sexual orientation and gender identity under Title VII of the Civil Rights Act. However, Title VII covers employment law, not education, and the Supreme Court has not, thankfully, yet extrapolated that redefinition to other areas of law. After the total shock of the Bostock ruling, in which Trump-appointed Justice Gorsuch wrote the 6-3 opinion that retroactively redefined the entire LGBT agenda into a 1964 statute, anything is possible. But here the Biden administration is jumping ahead of even the courts.

“It seems to be playing politics with feeding poor kids, which is really unfortunate,” said John Elcesser, executive director of the Indiana Non-Public Education Association. “Because if a school feels like they cannot participate because it’s in conflict with their mission or values, if a religious exemption is not granted, you’re taking away a program that’s feeding low-income kids.”

“Nutrition disparities negatively impact health, productivity and overall well-being for too many in the U.S.,” says the press release. Somehow, the Biden administration believes that threatening to withhold food support until it gets its way will improve nutrition.