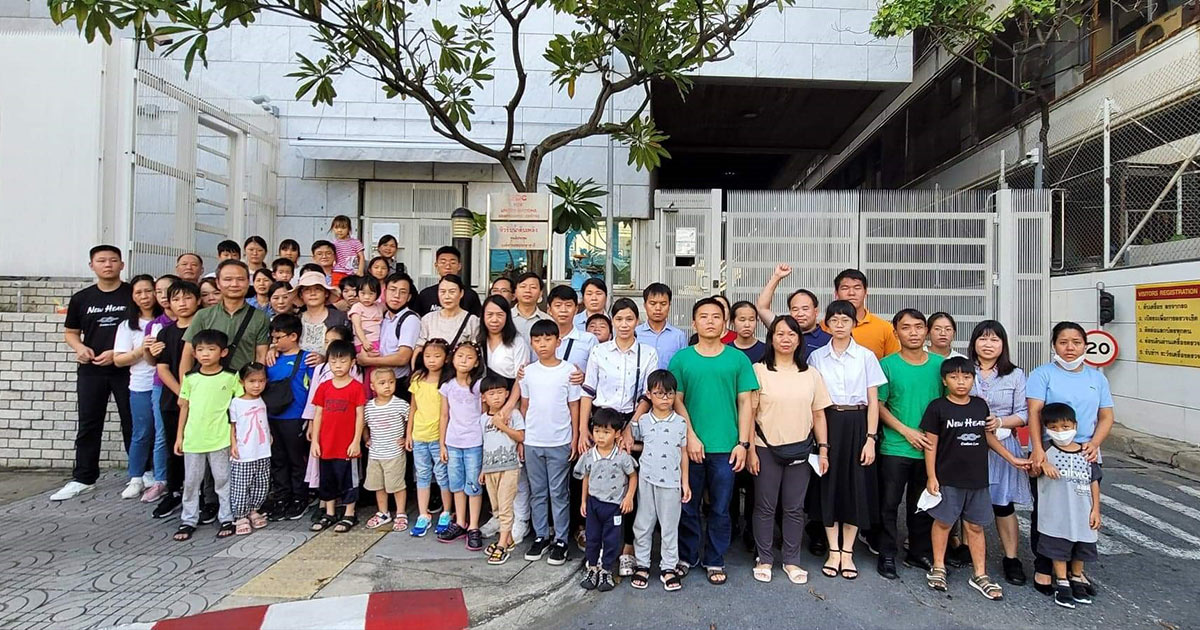 ‘We Left China at God’s Leading’: The U.S. Must Help This Chinese House Church in Hiding

A Chinese house church that escaped together three years ago is in more danger now than ever. Chinese authorities ramped up persecution against Pastor Pan Yongguang and Shenzhen Reformed Holy Church for years, prompting them to hold a church vote in 2019 and decided to flee China, heading to South Korea’s Jeju Island.

Having been denied asylum in South Korea without any mechanism of international protection, the group went to Thailand to file for U.N. refugee status which offers protection at the UNHCR headquarters in Bangkok. Now, they are faced with a host of new challenges, including legitimate fears that they might be abducted by Chinese agents.

At their hidden location in Thailand last week, members of the church told me the difficulties they are facing now are greater than any experienced in the first 10 years of their church. Some of the members’ Thai visas are expired; others are expiring soon. The lack of legal status leaves them vulnerable to arrest and deportation by Thai police, who are reportedly under pressure from the Chinese government regarding the church.

Even more alarmingly, Chinese agents have been spotted multiple times stalking and taking videos and photos of the church members during outings. This has convinced human rights advocates familiar with the case that the group is in “imminent danger.” As a result, the church members rarely go out and only venture to safe locations. The children of church members (who comprise about half of the 62 church members) must stay cooped up indoors for their own safety.

Human rights advocates believe that this is the first case of a church fleeing Chinese persecution as a group. It’s a unique situation, but the church itself is unique and has created a tight-knit community. In China, they met for prayer a few nights a week. In Thailand, they have family worship and prayer together every day. One elder said, “We are one church. We don’t want to leave anyone behind.” They believe this is what Christian community is supposed to be like. Another elder said, “We are God’s covenant community. We can’t separate from one another.”

The church was first founded by Pastor Pan in Shenzhen, Guangdong in 2012. He was occasionally called in for questioning by authorities, and as the years went on, the frequency and intensity of his interrogations continued. In 2018, new government regulations made it even more difficult for churches to operate. As Pastor Pan came under increasing government threats, his close friend Pastor Wang Yi was arrested and given a harsh nine-year prison sentence. When I met with Pastor Pan, it was clear that his friend’s imprisonment weighed heavily upon him. He began to fear that if he did not leave China, he could be next.

At the same time, government threats, intimidation, and harassment against Pastor Pan’s entire congregation were intensifying. Government-run education in China promotes atheism and communism; for the house church members, it was critical that they raise their children with a Christian education. They started a church-run school called Timothy School to meet that need. But as persecution ramped up against the church, so did government pressure on the school.

Teenagers in the church described how their school was raided by authorities multiple times. Their Bibles and theological texts were confiscated, and teachers were temporarily detained. Chinese officials started pressuring landlords who would rent spaces for the church and the school. Consequently, they were frequently forced to move locations.

These factors and more led a majority of the church members to decide to flee China together in search of a place that they could practice their faith freely and educate their children according to Christian principles.

The journey from China has been anything but easy. One woman, now pregnant, said that leaving China was not the hard part, but rather the separation from parents and other family members who remain in China. Most of the congregants converted to Christianity as adults and their extended family members find it difficult to understand why they would leave China and face an unknown future for the chance to live in a country that honors religious freedom.

Members of the church are open about their struggles. Though many came from middle-class families and held professional jobs in China, they could only do manual labor in South Korea and are now unable to work at all in Thailand. Their living quarters are sparse — a constant reminder that they are only supposed to be there temporarily.

In addition to the practical challenges, some of the congregants feel that the spiritual warfare against them is escalating. One church elder told me, “I thought our persecution was material, but it is also spiritual.” Yet, this faithful group of Christians is believing their situation will work out for the glory of God. Their commitment and reverence for the Bible is obvious, and their attitude amidst adversity reveals a profound depth of character. A common refrain I heard from all church members was “thanks be to God.”

Advocates have dubbed the church the “Mayflower Church” in reference to the English pilgrims who crossed the Atlantic on the Mayflower 400 years ago in search of a new life in the Americas. Indeed, the similarity is striking. As part of their curriculum at Timothy School — long before deciding to flee — the students read William Bradford’s “Of Plymouth Plantation” in Chinese. Now, it’s become a source of hope for the future these Christians seek to build in a free country that will accept them as refugees.

Ultimately, Pastor Pan and the members of Shenzhen Reformed Holy Church are praying to be quickly resettled. The United States is a natural destination for those desiring religious freedom. One woman from the church said, “Obviously, I would love to go to the U.S. I just want to be there and breathe the air of freedom.” Given the United States’ longstanding commitment to international religious freedom, the Biden administration must do everything in its power to help this church and make sure they find the refuge they need.

Former U.S. congressman Frank Wolf and Family Research Council senior fellow Bob Fu wrote in the Washington Times, “The U.S. government must ensure protection from refoulement immediately. If the Thai government refuses protection for the group from UNHCR, the U.N. refugee agency, then the church needs temporary resettlement in a third country to allow a more extensive U.S. resettlement processing time. Resettlement and protection in the United States for the Shenzhen Reformed Holy Church is in the best interest of these individuals being persecuted for their religious beliefs and emphasizes America’s commitment to refugees.”

In the immensely difficult situation that this group of people find themselves in, it would be easy to complain or even feel regret about leaving their middle-class lifestyles in China. Yet they are resolute. As one church member said, “We left China at God’s leading. … We still believe God is with us.”