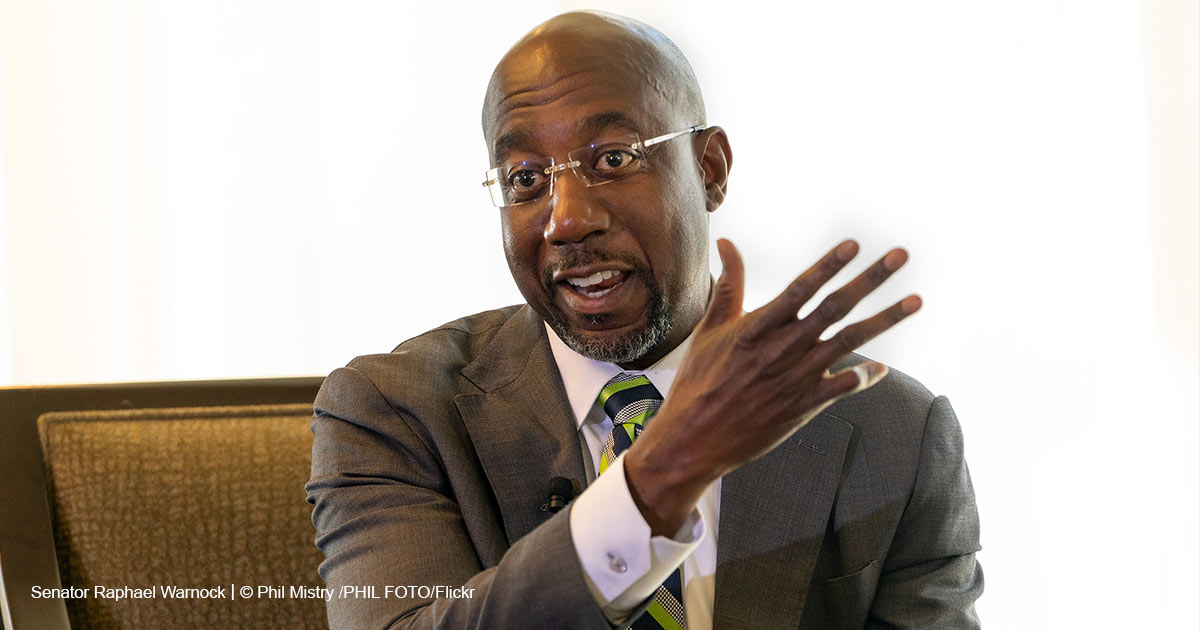 What Would Jesus Do: A Scriptural Response to a Pro-Choice Pastor

Back in the 90s and early 2000s, the phrase “What Would Jesus Do?” became extremely popular. As a child of the 90s, I wore my fair share of “WWJD” bracelets. The question was meant to provoke one to consider Jesus’s teaching when presented with a situation. What might not have seemed controversial at first glance might become a crisis of conscience when one considered what Jesus would do in that situation.

Most in the Democratic Party only refer to the Bible when it suits their purposes, like “Judge not lest you also be judged” or loving everyone regardless of their lifestyle. But Senator Raphael Warnock (D-Ga.) has taken this a step further. In a recent interview with MSNBC’s Joy Reid, Warnock responded that “it’s exactly what Jesus would do,” in addressing his opposition to Senator Lindsey Graham’s (R-S.C.) Protecting Pain-Capable Unborn Children from Late-Term Abortions Act, which would ban abortions after 15 weeks gestation. Unfortunately, we now must listen to Warnock’s heresies for another six years.

It seems easier to understand why someone without a biblical worldview would be in favor of abortion, although the natural law engrained on all our consciences gives everyone a knowledge of right and wrong even apart from salvation (Rom. 2:15). What infuriates me is to hear a pastor, someone who studies and preaches the Bible, take it so grossly out of context to justify the taking of innocent, unborn life. But as I investigated Warnock’s past, his views began to make more sense.

During his education, Warnock served in several churches, most notably Abyssinian Baptist Church. Rev. Adam Clayton Powell, Jr. was a longtime pastor there who went on to serve 14 scandal-ridden terms in the U.S. House of Representatives. It’s also significant that Cuban dictator Fidel Castro was invited to speak at the church while Warnock was a youth pastor. Although Warnock was not directly involved in inviting the Cuban dictator, he has thus far refused to condemn it.

By attending Union Theological Seminary, Warnock was clearly associating with that school and its teachings. Union Theological Seminary has long been associated with the political Left on just about every major moral issue and is closely aligned with LGBT causes. In the early 20th century, the seminary’s theology came from German higher biblical criticism and theological liberalism. (Ironically, it was such theology that led many German churches to be silent as Adolf Hitler took over most German churches and began his persecution of Protestants, Catholics, and Jews alike.) Later in the 20th century, Union Theological Seminary began teaching a liberation theology that emphasizes social activism and social justice. Warnock was heavily influenced by James Cone, a former professor at the seminary who taught liberation theology. Liberation theology differs from traditional Christian theology in that it replaces the atonement for sin through Jesus’s death on the cross. Instead, liberation theologians preach a combination of liberation and oppression — that God’s purpose for the world is social justice that should result in action.

Politics is just one way to put that liberation theology into action, and we see Warnock putting that faulty teaching to use, both as a U.S. Senator and as pastor of Ebenezer Baptist Church in Atlanta. While Warnock presented himself as a moderate on the campaign trail, his record on fundamental issues like life, family, and religious freedom has been squarely aligned with the radical Left. Everything comes back to our theology because theology shapes our worldviews, especially on issues like these.

But let’s at least clear up the record on what God said about life. The Bible is replete with references to the value of human life. We were created with an inherent dignity that is distinct from all other created things — we were created in the very image of God. Genesis 1:27 says, “So God created man in his own image, in the image of God he created him.” It’s also clear that taking human life is a right that belongs solely to God. Proverbs 6:16-19 lists seven specific things that God hates; the third item on that list is “hands that shed innocent blood.”

Both David (Psalm 139:13-16) and Jeremiah (1:4-5) write of themselves as personal beings in utero, lives that God had a specific plan for even before their births. In Luke 1:39-45, John the Baptist, who was still in his mother Elisabeth’s womb, leaped when Mary told Elisabeth she was carrying the Savior of the world, indicating that unborn children can not only hear but also showing John the Baptist’s unique connection with Jesus that had been prophesied years before.

When it comes to life, Scripture could not be clearer. It is a sacred gift entitled to protection. Woe to those like Warnock who intentionally twist Scripture to justify the killing of the unborn. As Christians, we must preach the value of every human life, regardless of circumstances. And we must strongly and publicly reject theology like that of Warnock’s. It’s un-American and certainly isn’t Christian.

So, what would Jesus do? Throughout his three-and-a-half-year ministry, Jesus loved and cared for the poor and needy, especially children. In fact, children often followed Jesus wherever He went, intensely drawn to His simple teachings and comforting presence. As Christians, we often speak of a childlike faith, an unquestioning trust in Jesus and His Word. Jesus spoke so simply that a child could understand. I think He explained the value of life in those terms.

Jesus would do the exact opposite of what Senator Warnock said He would. Instead of encouraging a woman to get an abortion, Jesus would love that woman who had been cast out by everyone else. He would comfort her in her crisis. And once that baby was born, Jesus would love it too. The only one that Jesus chose death for was Himself, as He bore the sins of the whole world on the cross. He chose death so that everyone else could have life. That’s exactly what our broken world needs to hear today.