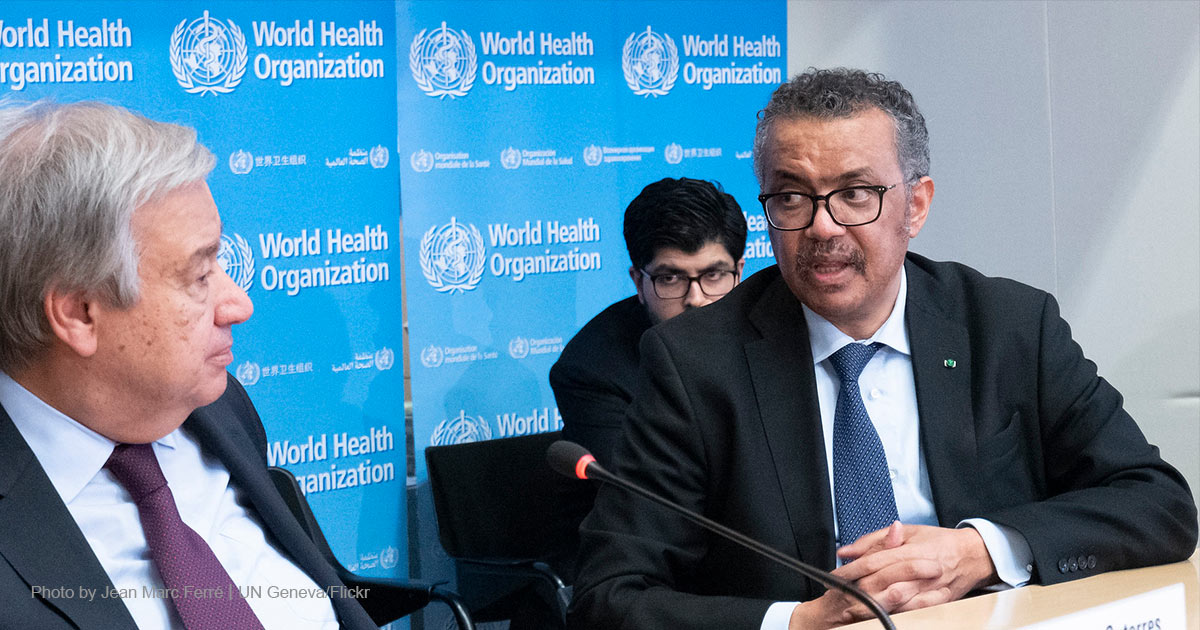 WHO Chief: Dobbs ‘Was a Setback’

“Health and humanitarian challenges that the world is facing” include COVID vaccines, monkeypox, malnourished children in Africa, and… the U.S. Supreme Court’s decision to overturn Roe v. Wade? That’s according to the World Health Organization (WHO) Director-General Tedros Adhanom Ghebreyesus in a Wednesday briefing. The comments were just what you would expect from a former African warlord who now does the bidding of the Chinese Communist Party.

“Finally, in light of the decision by the U.S. Supreme Court overturning the ‘Roe v Wade,’ I want to reaffirm WHO’s position,” he said. “Safe abortion IS health care. It saves lives.” Taking lives saves lives; got it.

“Restricting it drives women and girls towards unsafe abortions, resulting in complications, even death,” he continued. Mr. Ghebreyesus is far from representing world opinion on this point. Only five other countries, including China and North Korea, have abortion regimes as extreme as the one Roe v. Wade imposed on the U.S. — one that effectively prevents any restriction. Some nations protect unborn children after 24 weeks, many more after 14 weeks, and most at all stages of development, with certain exceptions. Yet the WHO chief’s rhetoric condemns all restrictions.

Instead, Ghebreyesus is parroting the talking points of President Joe Biden, or the mainstream American press — which has all been captured by the Left. From the way they carry on, you would think the Supreme Court had banned abortion, instead of merely vacating their ill-considered, legislative foray, and allowing the legitimate representatives of the people to set public policy.

While the Left likes to claim that abortion restrictions will make it “unsafe,” somehow the United States could never avoid “complications, even death” relating to abortion, even when it was pronounced legal by judicial fiat. The nature of abortion — taking the life of an unborn baby — always attracted shady characters who didn’t care about the life of the mother either, while many respectable physicians abhorred the practice.

Ghebreyesus went on, “The evidence is irrefutable. Limiting access to safe abortion costs lives and has a major impact particularly on women from the poorest and most marginalized communities.” Ever since the days when eugenics masqueraded as a respectable branch of science, global elites have held to the offensive notion that it’s bad for poor people to have lots of babies. This not only degrades the dignity of the children, but of their parents, too. And time has not been friendly to this wicked idea. Rich societies that embraced the idea that children are a nuisance are now facing bottomless population decline, while societies that still view children as good (either as a gift from God, or a continuation of the family unit) are still growing.

“Over the last 40 years, the global trend is toward women having greater access to safe abortion and while last week was a set-back, it is more important than ever to come together to protect women’s right to safe abortion — everywhere,” added the WHO chief. Invoking a trend as proof of the justice of your cause is dangerous; trends can be reversed. In countries like Mexico and Colombia, the decision has been made by courts — much like Roe v. Wade — and not the people. And the United States is hardly alone in moving away from abortion extremism. In March, Guatemala was proclaimed the “pro-life capital of Latin America.”

Most concerning, though, is Ghebreyesus’s use of the term “setback” to describe the Dobbs decision. He didn’t approach the decision as a neutral, outside observer who respects national sovereignty. Rather, he seems to envision abortion as both a global movement towards progress and a cause in which he is personally invested. He directs a worldwide organization ostensibly aimed at promoting health, and yet here he wades into a domestic controversy on the side of promoting death.

Ghebreyesus makes clear that he is serving an ideology, when he precedes his remarks with comments like, “All women should have the right to choose when it comes to their bodies and health. Full stop.” That’s a moral claim, not a health one. Abortion serves an ideology. Full stop. Due to sex-selective abortions, there were 22.5 million “missing female births” in China and India alone from 1970-2017 (not to mention other abortions; this study published in the Proceedings of the National Academy of Sciences was only concerned with sex ratio at birth). Why didn’t those 22.5 million women deserve the right to choose — or even the right to live?

If the World Health Organization really wanted to organize to help women around the world with a pregnancy-related health crisis, it turns out there is one. “As things stand now, about 800 women die daily from preventable pregnancy-related causes. Nearly all, or 94%, of these maternal deaths occur in low- to lower-middle-income countries,” writes Valerie Huber, former U.S. special representative for global women’s health at the U.S. Department of Health and Human Services (HHS). But that crisis didn’t even make the Director-General’s speech.

As hard as they might try, abortion proponents can never fully get around the reality that abortion takes the innocent human life of the unborn baby, and sometimes the mother, too. Modern scientific advances have only served to confirm this truth. Abortion activists foreign and domestic can bluster about a “setback,” meddle in the affairs of sovereign nations, undemocratically impose abortion over the will of the people, or hold forth on “the right side of history.” But they’re on the wrong side: of history, and of justice. Either in this life or the next, God will hold them accountable.