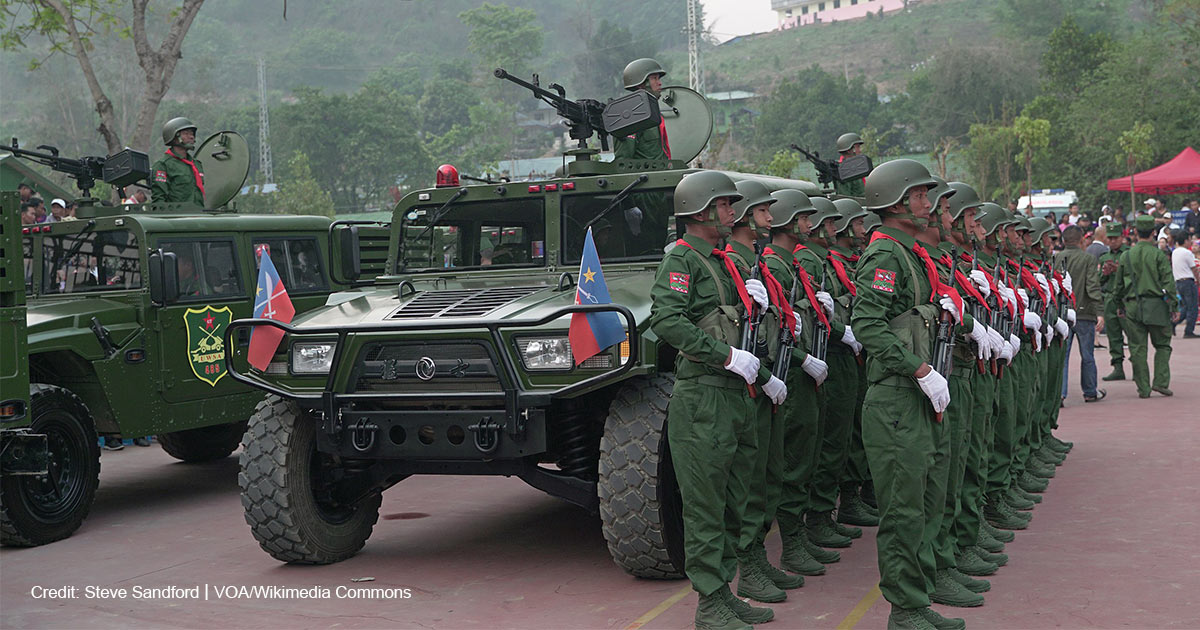 Why Is One Southeast Asian Military Attacking Schoolchildren?

When the helicopters returned and hovered near the village, she tried to get the students to cover. Then, soldiers from the Burmese military, the Tatmadaw, opened fire from the helicopters. Machine guns and rockets were shot at fleeing children and their school building located in a Buddhist compound. The helicopters stayed and fired at the school — where kindergarteners through 8th graders are educated — for around an hour.

As soon as the helicopters left, around 80 soldiers arrived on foot and began firing indiscriminately within the compound. Eventually, they took the bodies of the dead children. Soldiers also demanded that several adults and wounded children leave with them, while accusing two of the adults of being associated with an armed resistance unit, the People’s Defense Force.

Early reports indicted at least six students were killed in the onslaught. UNICEF puts the number of children who died in the attack even higher, at 11 verified deaths with 15 children from the school still missing. Eyewitnesses saw dozens of wounded children, included some with missing limbs.

Sadly, this is not the first time that the Tatmadaw — which ousted Burma’s elected government in February 2021 — has been caught targeting children. The United Nations’ Independent Investigative Mechanism for Myanmar recently briefed the U.N. Human Rights Council and cited reports of “children in Myanmar having been tortured and arbitrarily detained, sometimes to target their parents.”

Burma’s decades-long civil war continues to flare up across the country, involving multiple armed insurgencies and the Tatmadaw. Since Senior General Min Aung Hlaing and his forces staged a coup in February 2021 and imprisoned Burma’s elected leaders, things have only gotten worse. Widespread civilian protests against the coup were met with brutal force. In June, the U.N. estimated that the military had killed 2,000 civilians and displaced more than 700,000 since the beginning of the coup.

There seem to be no boundaries for soldiers fighting in this never-ending civil war. Generations have been traumatized from constant war, ethnic strife, and ethno-religious discrimination. The nature of indiscriminate attacks against civilians is shocking and disturbing.

Even before the coup, the Burmese military launched a savage genocidal campaign against the Rohingya Muslim minority, killing thousands and sending hundreds of thousands fleeing across the border. Villages were razed, innocent children, women, and men were tortured, raped, and slaughtered. The abuses were unthinkable. And when it happened, the elected government denied the problems and defended the military — the same military that later ousted them. Today, more than 700,000 Rohingya still live in refugee camps in Bangladesh.

Christian-majority ethnic groups in Burma also suffer greatly, especially the Chin, Kachin, and Karen. A Buddhist nationalist movement has pushed these groups to the margins of society. They face severe discrimination and prejudice, and are victims of the civil war caught between the reprehensible Tatmadaw and the insurgent groups that resist it.

Upon hearing such news, it can be difficult to grapple with these tragic situations. Extreme circumstances such as those in Burma make the pain and destruction of sin obvious. But followers of Christ are still bringing hope in the darkness. Free Burma Rangers provides training as medical first responders to ethnic minorities. Christian Freedom International runs a school along the Thai-Burma border serving students from the Christian-majority Karen ethnic group. These groups who care for the poor and the oppressed in an impossible situation are critically important, and they deserve our support.

Please pray for Burma as the violence continues. Pray for peace and for the protection of innocent children and civilians. Pray that the tyranny of the military junta would end, and the citizens of Burma would find a way to join together and establish a just government that protects all of its people.