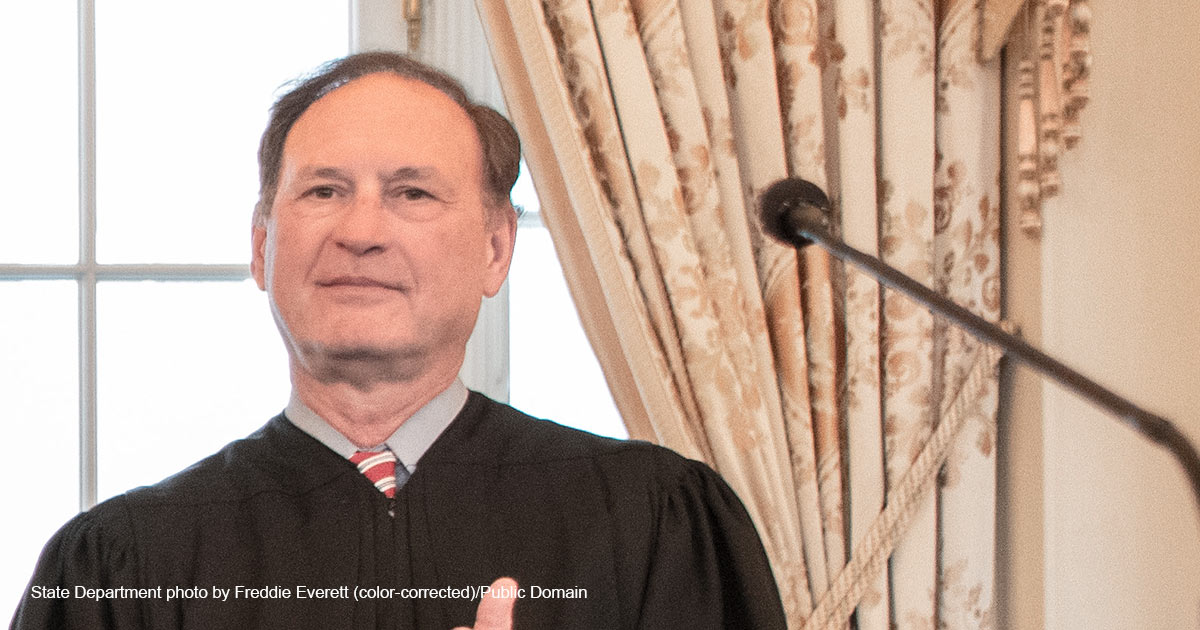 “It was a grave betrayal of trust by somebody.” On Tuesday, Supreme Court Justice Samuel Alito addressed the Dobbs draft leak from the stage of a Heritage Foundation lecture. He asserted that whoever leaked his initial draft decision to Politico in May, previewing the overturning of Roe v. Wade, had endangered the lives of the five justices in the conservative court majority.

“It was a shock because nothing like that had happened in the past,” Alito told Heritage Foundation’s John Malcolm. “The leak also made those of us who were thought to be in the majority in support of overruling Roe and Casey targets for assassination, because it gave people a rational reason to think they could prevent that from happening by killing one of us.”

A month after the earth-shattering breach of the court’s confidentiality, a would-be assassin was arrested outside of Justice Brett Kavanaugh’s home. A 26-year-old man from California was watching outside with weapons, prepared to murder the justice and himself, according to an FBI affidavit. He had found Kavanaugh’s Montgomery County residence after the five conservative justices’ home addresses were illegally published on the internet.

Since the doxing provided publicly available addresses, protestors went to the private homes of the justices to shout profanities, hold signs, blast music, and intimidate them into changing the decision expressed in the draft. One group dressed up in “Handmaid’s Tale” costumes protesting the allegedly “patriarchal” pro-life views outside of devoutly Catholic Justice Amy Coney Barrett’s home.

Additionally, many perceived that much of the rhetoric coming from powerful figureheads promoted revenge against the conservative majority. A video captured Senate Majority Leader Chuck Schumer (D-N.Y.) warning the justices that they would, “pay the price,” threatening that “You won’t know what hit you if you go forward with these awful decisions.”

The White House encouraged the private property protests, despite their illegality, with President Joe Biden saying that escalated pushback would cause a “mini-revolution” if the court didn’t walk back their draft decision. Amidst the rising unrest and lack of security for the justices, many were concerned by the DOJ’s lack of action and called on them to indict those threatening the majority.

“For nearly six months, dark money-funded left-wing protesters have targeted the justices and their families at their homes — even after the attempted assassination of Justice Kavanaugh,” Judicial Crisis Network president Carrie Severino told The Washington Stand. “It’s inexcusable that Merrick Garland’s DOJ still refuses to enforce the law, and that Democrats won’t denounce the threats.”

The Department of Justice did not respond to TWS’s request for comment at the time of this article’s publication.

Amidst the political agitation, the Supreme Court was surrounded by fencing and heightened security for several months through the summer, even after the overturning of Roe. Post-leak, Justice Clarence Thomas told an audience at a conference, “We can’t be an institution that can be bullied into giving you just the outcomes you want.”

This past year was not the first time attempts were made to intimidate the justices. Kavanaugh’s confirmation hearings were famously accompanied by what many Republicans called a “shameful smear campaign” with allegations against his character, past, and reputation.

Beyond the justices, pro-lifers, churches, and pregnancy resource centers have faced attacks since the leak. “The threats and acts of violence were outrageous, and the leak was an egregious breach of Supreme Court protocol,” Erin Hawley, senior appellate counsel for Alliance Defending Freedom, told TWS. “On top of all this, pregnancy centers were firebombed, churches were vandalized, and other pro-life ministries and individuals were threatened — all because they won’t condone abortion.”

“Thankfully, as Chief Justice Roberts and Justice Thomas made clear, the court was not intimidated,” Hawley continued. “It did the right thing in overturning Roe, righting a decades’ long constitutional wrong, and saving countless lives.”