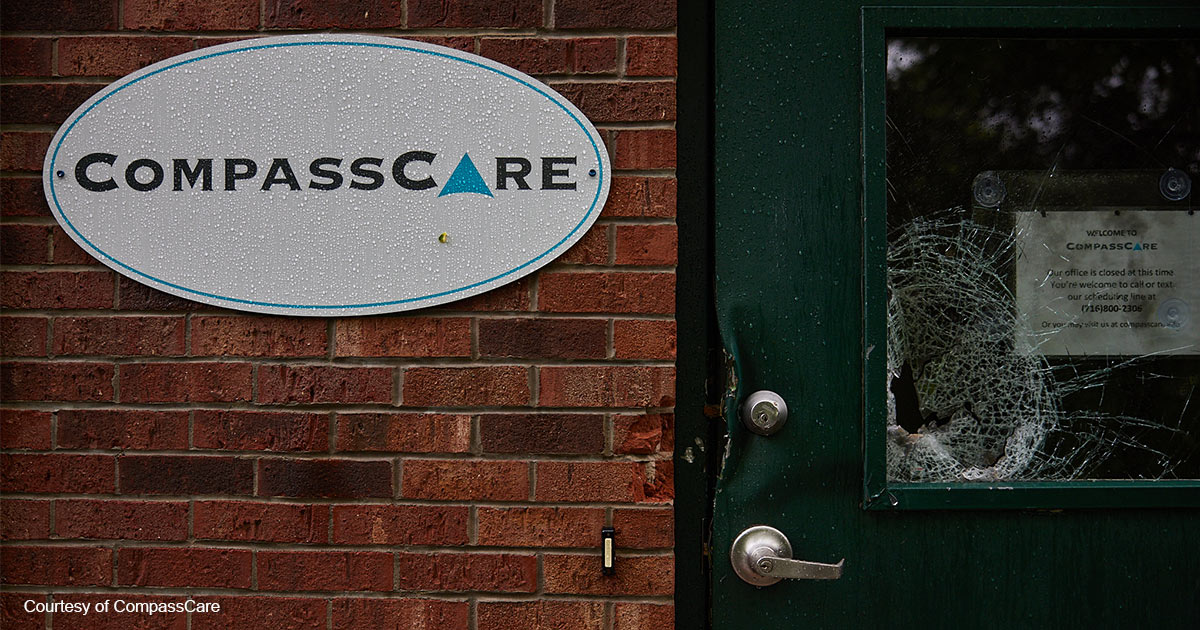 Six and a half months after the FBI announced the opening of an investigation into a series of violent attacks against pregnancy resource centers and pro-life organizations, the Bureau has yet to disclose any progress or whether any arrests have been made in the probe. As a result, at least one pregnancy resource center that was targeted is now hiring a private investigator to conduct its own inquiries into the unsolved attacks.

On the night of June 7, 2022, a perpetrator smashed the front windows, set fire to the interior, and spray-painted graffiti on the CompassCare pregnancy resource center in Buffalo, N.Y. The center became one of over 100 pro-life organizations and churches that have been attacked since last May, when a draft version of the Supreme Court’s Dobbs decision overturning Roe v. Wade was leaked to the media.

Daniel Tomlinson, director of Community Relations for CompassCare, joined “Washington Watch with Tony Perkins” on Thursday to discuss the incident and the actions his organization is taking in response.

“Jane’s Revenge, the abortion terrorist group that has perpetrated dozens of these attacks against pro-life service organizations, firebombed CompassCare’s medical office … causing nearly half a million dollars worth of damage,” he explained. “And two firefighters were injured in the attack. … It’s been 161 days and no arrests have been made. … Nobody has been arrested for any of these attacks across the nation.”

In response to The Washington Stand’s five separate inquiries to the FBI over the last six months about whether any arrests have been made in relation to their investigation, the Bureau did not address the question and instead referred to a boilerplate statement that it is “continuing to investigate” the attacks.

It appears that the FBI’s investigative priorities lie elsewhere. In 2022, the Biden administration’s Department of Justice has overseen the arrest of 26 pro-life individuals who they claim violated the Freedom of Access to Clinic Entrances (FACE) Act. The 26 arrests marked a 550% increase over the four arrests related to the FACE Act in 2021.

As a result, CompassCare recently announced that they are currently partnering with the Thomas More Society in order to conduct an independent investigation into the arson attack perpetrated against them. CompassCare’s CEO Jim Harden further explained to The Christian Post that the investigation would also look into the crimes perpetrated against pregnancy centers “nationwide.” He elaborated that the investigation has already revealed some noteworthy details, including “the manner in which the terrorist activity and communications are happening, similar to al-Qaeda type communications and leadership infrastructure as well as the potential interaction with the transgender movement.”

In the face of the FBI’s inaction related to the violence perpetrated against pro-life organizations, attacks and threats continue to occur. The latest attacks took place in the Detroit, Mich. area on December 17, when the Pregnancy Aid Detroit center was defaced with graffiti. The home of a Pregnancy Aid Detroit board member was also smeared with graffiti and had windows broken.

“The threats are ongoing,” said Tomlinson. “We’ve increased security at all [our] locations with cameras and other measures. The threats are ongoing both from the pro-abortion terrorist groups in terms of their promising that further attacks are not going to be so easily cleaned up as a fire and graffiti — basically making death threats against the pregnancy centers.”

He continued, “The threats are [also] ongoing with Big Tech actively censoring pro-life service organizations like Google and Yelp. And then we have pro-abortion politicians pushing a rabid pro-abortion agenda, talking about how pregnancy centers are peddling ‘misinformation’ — Elizabeth Warren going so far as [saying] that all pregnancy centers everywhere should be ‘shut down’ because we are ‘torturing women.’ It’s interesting to see how pro-abortion politicians, the pro-abortion lobbying groups, and these domestic terrorist groups are all using the exact same language, talking about ‘misinformation,’ ‘dangerous and misleading,’ ‘torturing women,’ all this type of stuff.”