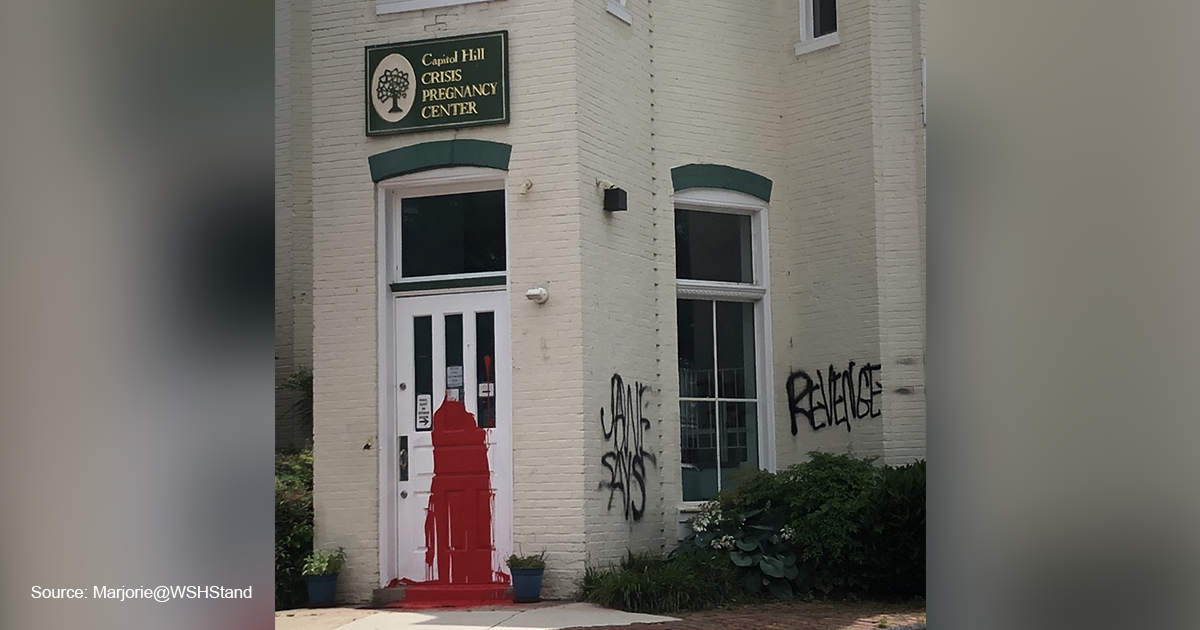 “Jane Says Revenge.” Friday morning on her day out of the office, Janet Durig received a rude awakening when a former neighbor sent her a text alerting her that these words had been spraypainted on the side of Capitol Hill Pregnancy Center (CHPC). The door was splattered in bright red paint with the vandal’s red footprints trailing to the end of the sidewalk. In her 19 years as director, Durig has never seen vandalism like this occur.

A few hours later, the sidewalk around the center is roped off with yellow tape, police are gathering evidence and investigating, and power washers are blasting the still-wet paint off the door and ground. In the wake of the heightened tension surrounding the Dobbs Supreme Court decision leak, CHPC joins the ranks of pregnancy resource centers targeted by pro-abortion vandals.

This isn’t a typical work morning for Janet. More typical, she shared exclusively with The Washington Stand, would be an early morning she had recently when a distraught woman showed up at the pregnancy center’s doors before office hours, evidently high on drugs, and asked for a pregnancy test. Durig welcomed her into the counseling room and offered to drive her to the hospital. Distressed, the woman declined and insisted that she only wanted a test to make sure she was not pregnant. She lived in a boarded-up drug house in Anacostia with 14 people, and given her situation, she said, was in no state to become a mother.

“So we took the test, and yes, she was pregnant,” Durig said. “She stayed with me for a very long time, [and] she was struggling.” The woman told Janet that she wished she weren’t on drugs and didn’t know what she needed to do about her baby. Durig prayed with the woman, hugged her, and walked out to the sidewalk with her.

“I remember just not quite wanting to say goodbye yet,” Durig recalled. “She turned around and hugged me and started to cry, and said, ‘I wish I didn’t have to do this.’ And I said, ‘well maybe you don’t.’” After parting ways, this woman and her situation stayed on Durig’s mind and in her prayers.

Months later, the same woman surprised Janet by walking through the doors of Capitol Hill Pregnancy Center. “In walked that same woman — and she looked gorgeous. I’ll never forget. She was healthy and gorgeous. She just grinned from ear to ear, and said, ‘Do you remember me?’ I started to cry and said, ‘Yes I do.” Durig teared up as she told the story. The woman shared with her that when she first left the pregnancy center that morning months ago, she walked away from the drug house and went to her aunt’s house to dry out, often taking long walks to help the process. One day, her walking route took her by a church, where she felt compelled to walk in and give her life to God. Through the church, she began a recovery program.

“I have a beautiful baby boy,” she beamed to Durig, explaining that she was also about to graduate from her recovery program. “Will you come to my graduation?” With tears in her eyes, During shared with TWS, “I can’t say that every client who comes here has a dramatic story, but I’m telling you, not a week goes by that we don’t have one or two of them.”

For nearly 38 years, Capitol Hill Pregnancy Center has been “provid[ing] compassionate care as well as complete, accurate information pertaining to pregnancy and pregnancy options,” according to their website. The old rowhome office features rooms packed floor to ceiling with tubs of gently used children’s clothing, diapers, books, shoes, and toys, predominantly gifted by generous donors. The organization offers parenting classes, confidential support, pregnancy help, and a variety of services for mothers in need, fueled by the support and volunteer hours of local churches, school groups, and neighbors.

For all the work that they do for the local community of mothers, fathers, and infants in Washington, D.C., this faith-based nonprofit is misunderstood, according to During. “I think we do a massive amount of help to the community — not sure we’re always understood.” To those who would try to intimidate them for the work they are doing, she responds, “God bless you — and would you ever be willing to take the time to see the big picture of what a place like the Capitol Hill Pregnancy Center really does?”

“This is who the pro-abortion movement is,” FRC’s director of the Center for Human Dignity Mary Szoch remarked in response to the local act of vandalism, “They’re a group of people who are committed to pressuring women into acts of violence — to committing acts of violence against women.”

In the surrounding debate about what pro-abortionists call “women’s rights,” Mary responds, “Pregnancy resource centers like Capitol Hill Pregnancy Center serve to provide support and help for women who are in need. They serve as a way for women to accomplish their goals alongside their children. To attack a pregnancy resource center is indicative of the pro-abortion movement’s commitment to violence being their constant response.”

Individuals who would like to support Durig and Capitol Hill Pregnancy Center in the wake of the vandalism are encouraged to donate at their website. “And first and foremost, pray,” she says. With graffiti ornamenting the exterior of the building, Janet smiles and says, “People need to know what’s really going on in here.”