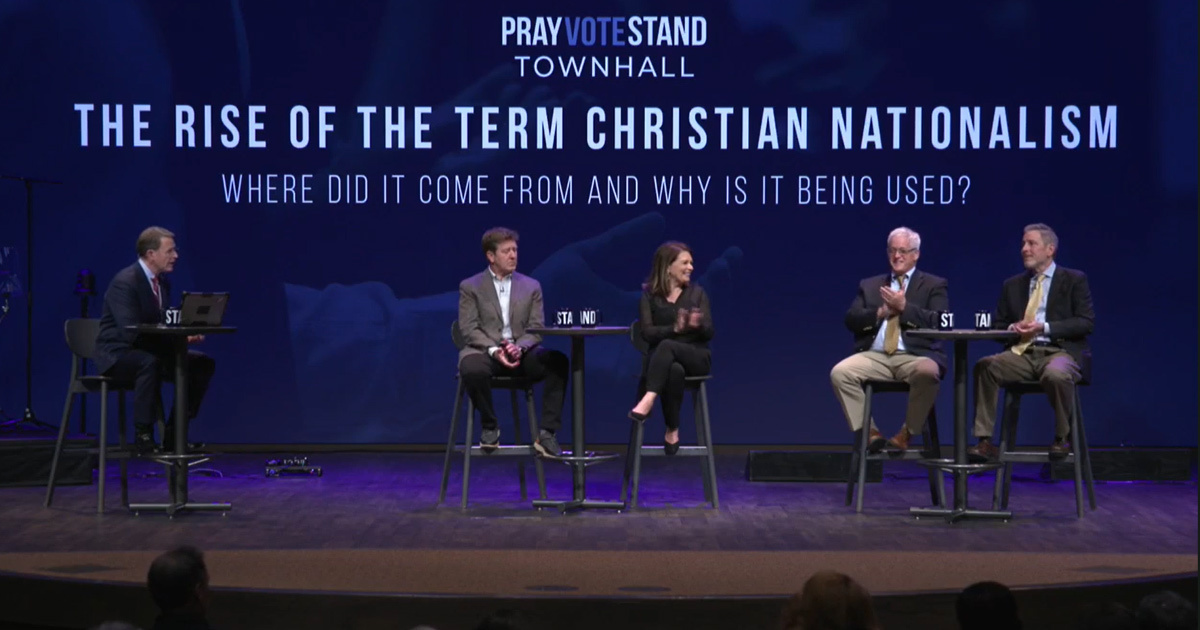 Christian nationalism — a label for racist bigoted extremists or a loaded buzzword aimed at intimidating the church from boldly standing for biblical truth in the culture? With the trending term ever increasing in popularity and media presence, Family Research Council’s president Tony Perkins hosted a Pray Vote Stand Townhall Wednesday night at Cornerstone Chapel in Leesburg, Virginia.

Several notable conservative Christian leaders were present in the lineup to tackle the subject of the evening, “The Rise of the Term Christian Nationalism: Where Did It Come From and Why Is It Being Used?” — including former congresswoman Michele Bachmann, Cornerstone Senior Pastor Gary Hamrick, Dr. Mark David Hall, and Dr. Stephen Coughlin. By analyzing the term, they engaged the controversial characterization and unpacked the role that Christians have to play in the political world around them.

First up, Dr. Mark David Hall, author and political professor at George Fox University, took the stage to define the popular pejorative. Delving into the phrase’s origins, Hall explained that it was only as recently as 2006 that the term was coined to negatively refer to Americans plagued with “racism, sexism, [and] militarism.” Though once a scarcely uttered term, more scholars began writing on the subject through the years.

Hall explained that through the events of January 6, 2021, the media gave center stage to the narrative that “Christian nationalists” had stormed the Capitol building, claiming the presence of a Christian flag and imagery present amidst the chaos. Strongly condemning the riot that took place and acknowledging a subset of radical revolutionaries, Hall insisted that it is simply incorrect to lump Christians in with these actors. He analyzed how many scholars have incorrectly claimed that a staggering 52% of Americans fall into the aforementioned bucket of “racism, sexism, [and] militarism” — yet, Hall said, “their measures are fundamentally flawed.”

Hall warned against adopting the insult as a positive label, as some have done in response. In his perspective, “Christian nationalism” is an affront believers should reject, rather than a term to be embraced. If it truly is a misnomer intended to shame believers who are bringing biblical hope and truth into a dark world, Hall says Christians ought to simply identify as followers of Christ.

“To the extent to which government should be involved in addressing these very real problems, Christians must have a voice,” he asserted, outlining that Christians should have a role in cultural change. “We must be active in the public square advocating for peace, for justice, for liberty, for equality, and equality for all Americans.”

Next, Dr. Stephen Coughlin, the principal at Unconstrained Analytics, dissected how the term has been wielded by critics and political counterparts. “Christian nationalism is an information campaign designed to synchronize with January 6th narratives,” he told the room, flipping through slides of example after example of tweets blaming “Christian nationalists” for the actions of a smaller subset of radicals — or, in some cases, for reasons of religious discrimination.

He asserted that this attempt to rebrand Christians into racist radicals is in line with Marxist critical race theory, intended to delegitimize American Christians and their history as “moneychangers at the temple” (referencing Matthew 21:12) rather than agents of spiritual hope. Claiming intersectionality is at play, Coughlin outlined how this line of thinking flips the script: “Patriotic Christians will become now Christian nationalists, and it will be defined negatively.”

Coughlin says that, despite the narratives of extremism and conflation of God and country given to alleged “Christian nationalists,” the critics themselves expose their own hypocrisy. Many of the same people attempting to “gaslight” and feed the “violent extremism narrative,” do so without acknowledging their own biases and connections to The White House, the New York Times 1619 project, and the Lincoln Project.

“I think that ‘Christian nationalism’ is an attack on your identity,” he concluded. “It seeks to destroy your identity along with other things, and I think at a certain point — you know, there’s a patch for the Army basic training, and it says, ‘This we will defend.’ And sometimes you have to take your [flag], put it in the ground, and say, this we will defend.”

In response to the challenges discussed by previous speakers, former congresswoman and current dean of Regent University’s School of Government, Michele Bachmann, delivered a rousing charge to Christians and pastors, urging them to not back down, but rather, let their faith influence how they engage with culture.

“Whatever we do in life, we’re doing it for an audience of one, and that’s the Lord,” she encouraged. “So no matter what, we need to know that we have voted in a way that would honor Him. That’s just part of the way we live our lives. It’s part of the way that we worship God. How do we conduct ourselves? The vote is part of it. I will tell you from a political point of view, you can’t believe the number of races that are decided literally by one vote — by one vote.”

“Too many pastors have been frightened into silence,” Bachmann said. She reminding the room of the story of Dietrich Bonhoeffer, an early 20th century German pastor who stood up against the evil he saw from the Nazi regime in a time when the European church had decided to remain silent. His boldness ultimately cost him his life, when he was killed by the Nazis he opposed. “When the church goes silent,” she explained, “bad things happen.”

“The values of the church are meant for the community, for the nation, for the public, for those who don’t yet know or understand that there is a loving God who has a plan for every person on this planet,” she expressed. “That is why the church preaches.”

Cornerstone Chapel’s Pastor Gary Hamrick urged the crowd not to be dissuaded by shameful labels, but rather to continue to live out a biblical mandate to bring biblical truth into the world around them. “Until that day when Jesus comes again, we are to be salt and light,” he reminded. “So be that salt and be that light to this dark and tasteless world.”