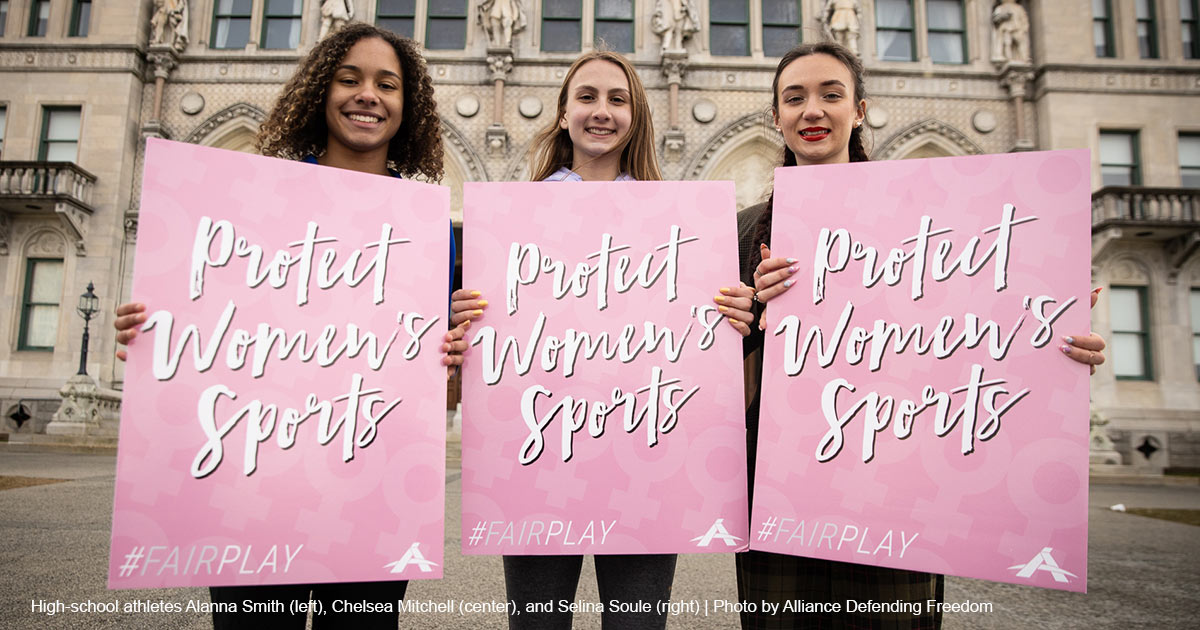 A three-judge panel of the Court of Appeals for the 2nd Circuit on Friday dismissed a lawsuit by four female athletes who were forced to compete against biological males and lost positions, awards, and scholarships as a result.

“The court, in its opinion, essentially created a different category of women,” said “Washington Watch” guest host Joseph Backholm. In characterizing the situation, the court wrote, “four female athletes who are cisgender … competed in CIAC-sponsored girls’ track events against female athletes who are transgender.” Backholm responded, “It’s a lie. It’s like a way of saying, ‘Well, tall women were competing against shorter women,’ or ‘The left-handed women were competing against right-handed women.’”

Mary Szoch, FRC’s director of the Center for Human Dignity and a former Division I NCAA athlete, agreed. “As any woman who has played sports against men knows, there are biological differences that make a huge difference when it comes to sports. Average male athletes will be exceptional female athletes simply because of the difference in height and jumping ability and speed.”

Szoch also objected to the 2nd Circuit calling biological females “cisgender women” and biological males “transgender women.” “It’s completely crazy,” she said, “this idea that being a woman is something akin to putting on a blue hat or a purple dress. It’s not something that you can take on and take off. It’s something that is at the core of your very being. It’s written in our DNA.”

Szoch also refuted the court’s finding that the high school athletes failed to show an “injury in fact.” She called it “ridiculous” and “absurd” to contend that no damage is done by “telling a girl, ‘No matter how hard you try, you’re just never going to be good enough because you’re a woman and not a man.’”

Szoch argued that the notion that people can assume or discard the opposite gender identity directly threatens all the gains to equal access that women have attained through Title IX and decades of hard work. “It means that women are being erased. It means that every ceiling that has been broken, that every barrier that has been crossed, all of those have just been put back up,” she lamented. “Men who decide that they’re women, they can be the ones to take those jobs. They can be the one to take that spot on the team.”

The point of Title IX, Szoch continued, was to create equal opportunities for women to compete in such things as collegiate or high school athletics. Men already had those opportunities and will continue to have those opportunities. But if men can now compete in (and dominate) women’s sports, too, then women have nowhere left to go for an opportunity, she argued. “We don’t see a problem with women trying to play Men’s Division I sports or women suddenly winning high school track meets in the men’s division.”

“Every year, Szoch continued, “significantly more women than men are killed in car accidents because the test dummies for car accidents when they’re simulating women are just shrunken men. That’s not what a woman is. A woman is not a smaller version of a man.” Notably, the 2nd Circuit ruling classifies men who identify as women as a larger version of women.

Meg Kilgannon, FRC’s senior fellow for Education Studies, contended on “Washington Watch” that the 2nd Circuit chose their language deliberately in order to skew the argument in favor of one side by referring to biological males as “transgender women.” “This is the Left understanding the need to control the terms in an argument,” she said. “They establish the terminology. They require you to use that terminology. And in doing so, they [take] a lot of the argument away from you on the battlefield.”

Referring to biological females as “cisgender” women was worse, argued Kilgannon. “The assignment of the term ‘cisgender’ to describe these girls is just offensive on its face,” she said. “To think that there needs to be some sort of a qualifier or descriptor on a term like woman or man is absurd.” The term is so clear that it “does not need any further description,” she continued.

Backholm agreed the court demonstrated bias “just by virtue of them using the term ‘cisgender,’ which is a made-up term, to try to set up a framework in which ‘transgender’ is just a different kind of woman.” He noted the court’s classification scheme “grants the premise of their argument.”

The American ideal of “equal justice before the law” relies upon unbiased judges applying the law as written, and not inserting their personal preferences, Backholm contended. Just as with the current obsession with advertising one’s preferred pronouns, terms like “cisgender” and “transgender” are dead giveaway that someone favors the transgender ideology. “I already know what you think, without you telling me what you think, because of the words that you’re using,” said Backholm.