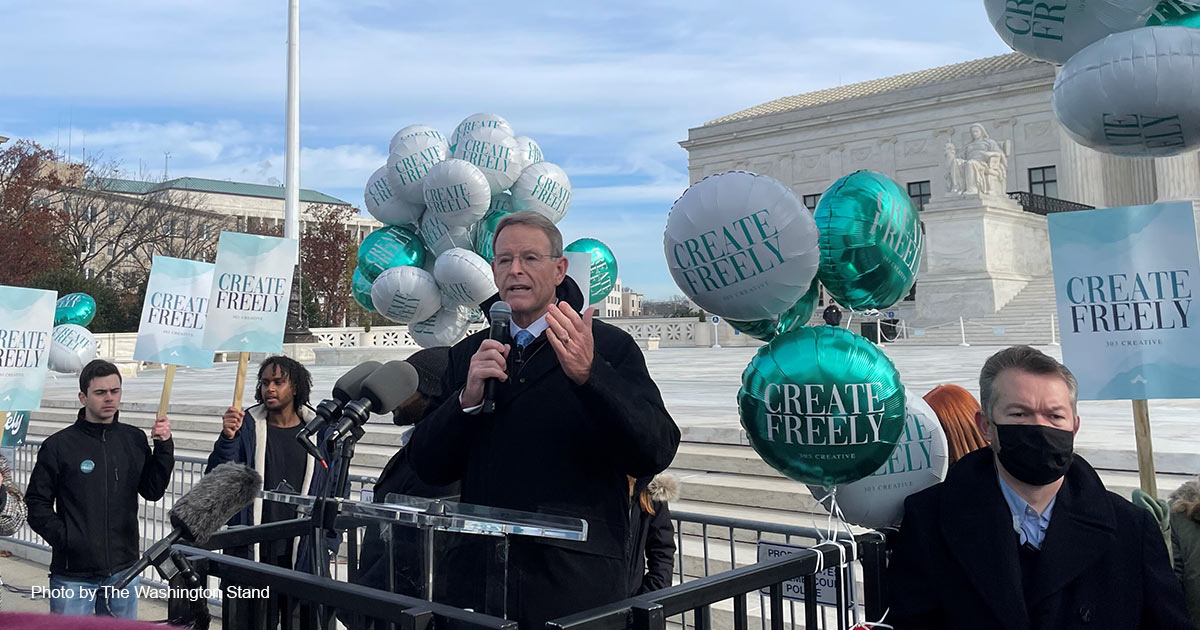 ‘Create Freely’: Religious Liberty Matters for All Artists, All Americans

In the December chill of Monday morning, a small crowd gathered outside the Supreme Court as the justices listened to the oral arguments for 303 Creative v. Elenis. Alliance Defending Freedom (ADF) President and General Counsel Kristen Waggoner represents graphic designer Lorie Smith in her battle to defend her First Amendment rights as an artist.

ADF held a “Create Freely” rally on the steps of the court, where several conservative leaders, religious liberty advocates, and clients spoke out about why the right to free expression is worth protecting for all artists and all Americans. Several members of Congress, such as Senator James Lankford (R-Okla.), Congressman Mike Johnson (R-La.), and Congressman Doug Lamborn (R-Colo.), gave remarks on the value of free speech and the limitations of government in coercing speech. A small group of protestors was also present, as disrupters did everything from wave pride flags, blare sirens and music, and shout, to several Satanists clad in pentagrams, masks, and hoods holding signs reading “The Future is Satanic,” and so on.

Lorie Smith works with many clients from various walks of life, beliefs, and creeds, regardless of how they identify. A former corporate woman-turned-independent artist, Smith is a devout Christian who is deeply convicted about which messages her business can promote. As her design business, 303 Creative, expanded into the wedding website space, Smith knew she could not promote same-sex unions in light of her Christian belief that marriage is between a man and a woman.

Unfortunately for the artist, a Colorado anti-discrimination law threatens to punish those who deny services on the basis of “sexual orientation,” a business censorship that Smith watched as it famously took down fellow Coloradan baker Jack Phillips, owner of Masterpiece Cakeshop. In a move to protect her religious liberty and right to not violate her conscience as an artist, Smith took legal action against the law.

A lot hangs in the balance with the Supreme Court’s decision on 303 Creative. Other small business owners have faced similar religious liberty predicaments, such as Kentucky-based photographer Chelsey Nelson, who refused to photograph same-sex weddings due to her religious convictions. Another Christian Kentucky artist, Blaine Adams, refused a t-shirt printing project for the local pride festival. Both of these believers have come under legal fire and are appealing for their right to accept and decline projects freely as their consciences and beliefs direct them, without government threat or intimidation.

Amidst the chanting and cheering at the rally, Family Research Council President Tony Perkins shared from the podium why the 303 Creative case should matter to every American. “We are here for free speech for everyone,” he shouted over the blaring sirens and din of protestors. “You know, I find it very interesting that we’re here speaking while those on the other side don’t want to speak. They just want to drown us out. But you know what? We defend their right to do that.”

“As the chairman of the U.S. Commission on International Religious Freedom, we advocated for religious freedom for all people. They may not agree with us, but we advocated for their freedom. You know, we aren’t just fighting for Christians. We are here at the Supreme Court asking them to protect all people’s faith and all people’s ability to operate and to live by their deeply held beliefs. The First Amendment protects our most sacred and important liberties. That is the freedom of speech and the freedom of religion. And as Christians, our freedom of religion isn’t just the church that we choose to attend on Sunday or not attend,” Perkins continued. “We need to have the ability as men and women of faith, whether we work as lawyers, as teachers or artists or web designers — we need to be able to do that in such a way that honors God.”

“Colorado’s censorship of Lorie and requiring her to create designs that go against her core religious belief is indefensible,” he argued. “It is time that the Supreme Court, once and for all, ensures that the government cannot abuse its power by coercing and silencing someone because it does not like their beliefs. It is time government recognize what God has created, and that is our freedom to worship Him in all that we do. And we will continue to advocate for that right, for all Americans, no matter what.”

In an exclusive comment to The Washington Stand, Perkins explains why Christians should care about the religious liberty outcome of the case. “We shouldn’t be put into a position of choosing to honor God or obey government,” he said. “We should be able to do both. And historically in this country, we’ve been able to because our government has recognized God-given boundaries for government. Government has crossed the line and it is telling Christians how they are to worship God by saying they cannot honor him in their work.”