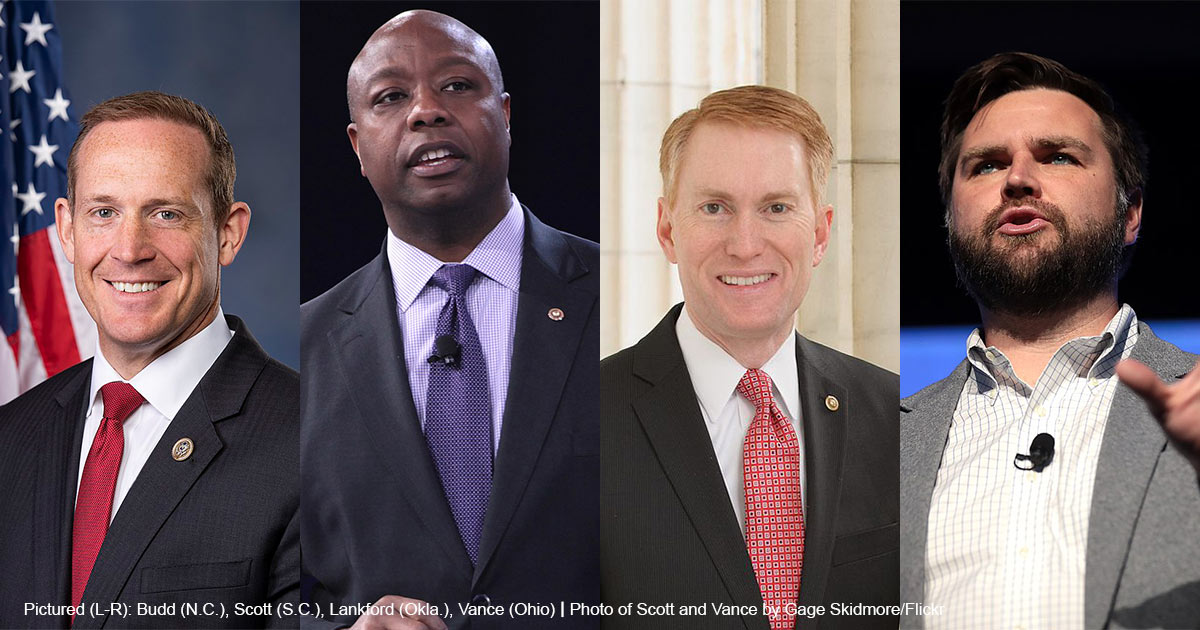 Thirty-five seats (including a special election in Oklahoma) were up for election this cycle. Of the seats without an election, Democrats hold 36 seats, and Republicans hold 29. Because of Vice President Kamala Harris’s tie-breaking vote, Democrats need only 50 seats to control the Senate, while Republicans need 51. As of this writing, Democrats controlled 48 seats to Republicans’ 49.

The battle for control of the Senate boiled down to a relatively small set of eight competitive seats — Arizona, Georgia, New Hampshire, North Carolina, Nevada, Pennsylvania, Ohio, and Wisconsin. Republicans needed to win five of those eight states (a net gain of only one seat) to take control of the upper chamber. Thus far, Republicans have unofficially won three of those seats, and Democrats have won two (results are only made official when the state’s election officers certify the results).

In North Carolina, The Associated Press has called the race for Republican Ted Budd, who was competing against Democrat Cheri Beasley for an open Senate seat formerly held by retiring Republican Senator Richard Burr. As of Wednesday morning, Budd had 50.7% of the vote, and Beasley had 47.1% of the vote, with 98% reporting, a lead of about 130,000 votes.

As a U.S. representative, Budd earned a “True Blue” award from FRC Action in 2021, based on his 100% rating on the 2021 scorecard. FRC Action PAC endorsed Budd for Senate, with the group’s president, Tony Perkins, calling him “a steadfast advocate for the unborn” who “supported and worked to pass important legislation like the Born Alive Abortion Survivors Protection Act, the Pain-Capable Unborn Child Protection Act, the Hyde Amendment, the Protection of Women and Girls in Sports Act, and other important measures.” Former chief justice of the state Supreme Court, Beasley vowed to repeal the Hyde Amendment and codify Roe v. Wade.

In Ohio, The Associated Press has called the race for Republican J.D. Vance, who competed against Democrat Tim Ryan for an open Senate seat formerly held by retiring Republican Senator Rob Portman. As of Wednesday morning, Vance had 53.3% of the vote, and Ryan had 46.7% of the vote, with 97% reporting, a lead of about 260,000 votes.

Author of “Hillbilly Elegy,” Vance is a political novice endorsed by former President Donald Trump. As a U.S. representative, Ryan scored 4% on the FRC Action 2021 scorecard, voting for abortion, the LGBT agenda, and other anti-family legislation.

In New Hampshire, The Associated Press called the race for incumbent Democrat Senator Maggie Hassan, who was being challenged by Republican Don Bolduc. As of Wednesday morning, Hassan had 54.2% of the vote, and Bolduc had 43.8% of the vote with 81% reporting, a lead of about 52,000 votes.

Senator Hassan received a 0% rating from FRC Action on the 2021 scorecard. Bolduc is a retired general endorsed by former President Donald Trump.

In Pennsylvania, The Associated Press called the race for Democrat John Fetterman, who was contesting an open Senate seat, formerly held by retiring Republican Senator Pat Toomey, against Republican Mehmet Oz. As of Wednesday morning, Fetterman had 50.3% of the vote, and Oz had 47.3% of the vote, with 93% reporting, a lead of about 150,000 votes.

Fetterman currently serves as lieutenant governor of Pennsylvania, and before that was a small-town mayor. He suffered a stroke around the time of his nomination in the Democratic primary, inhibiting his auditory processing and ability to campaign, which was evident in an October debate. “Dr. Oz,” the television personality, was recruited and endorsed by former President Donald Trump. During his campaign, Oz said he would vote to codify same-sex marriage.

In Arizona, incumbent Democrat Senator Mark Kelly leads Republican challenger Blake Masters. As of Wednesday morning, Masters had 46.4% of the vote, and Kelly had 51.4% of the vote, with 66% reporting, a lead of 90,000 votes. The Associated Press has not yet called this race. Arizona experienced significant, embarrassing mistakes on Election Day. In Maricopa County, the largest in the state, 20% of tabulation machines were malfunctioning, creating confusion, delays, and long lines.

Senator Kelly received a 0% rating from FRC Action on the 2021 scorecard. New to politics, Masters was endorsed by former President Donald Trump.

In Georgia, incumbent Democrat Senator Raphael Warnock leads Republican Herschel Walker. As of Wednesday morning, Warnock had 49.4% of the vote, and Walker had 48.5% of the vote, with 98% reporting, a lead of about 35,000 votes. Libertarian candidate Chase Oliver has won 2.1% of the vote. Under Georgia election law, the race will head to a run-off if no candidate receives an absolute majority of the votes.

Senator Warnock received a 0% rating from FRC Action on the 2021 scorecard. FRC Action PAC endorsed Walker, a former college football star. Perkins expressed confidence “that he will be a dedicated advocate for our freedoms and our families.”

In Nevada, Republican Adam Laxalt leads incumbent Democrat Senator Catherine Cortez Masto. As of Wednesday morning, Laxalt had 49.9% of the vote, and Cortez Masto had 47.2% of the vote, with 72% reporting, a lead of about 20,000 votes. The Associated Press has not yet called the race.

Senator Cortez Masto received a 0% rating from FRC Action on the 2021 scorecard. As former state attorney general, Laxalt supported pro-life laws in other states like Alabama and Texas.

In Wisconsin, incumbent Republican Senator Ron Johnson squeaked by Democrat challenger Mandela Barnes. As of Wednesday morning, Johnson had 50.5% of the vote, and Barnes had 49.5% of the vote, with 99% reporting, a lead of about 25,000 votes. (Fox News called the race for Johnson around noon on Wednesday.)

Johnson earned a “True Blue” award from FRC Action in 2021, based on his 100% rating on the 2021 scorecard. FRC Action PAC endorsed Johnson for Senate. Barnes, the state’s lieutenant governor, called for abolishing the filibuster to codify Roe v. Wade.

One more undecided Senate race in Alaska will not decide which party will control Congress because the frontrunners are two Republicans. As of Wednesday morning, Republican challenger Kelly Tshibaka (44.4% of the vote) leads Republican incumbent Lisa Murkowski (42.7% of the vote), with 75% reporting. Democrat Patricia Chesbro is a distant third with 9.5% of the vote. Under the state’s ranked choice voting system — a sort of automatic run-off process — voters select second and third choices on the ballot, and then election officials reassign ballots from the candidate receiving the fewest first-choice votes to the candidate chosen as the second choice. The process continues in rounds, eliminating one candidate per round, until one candidate receives an absolute majority.

Senator Murkowski received a 68% rating on FRC Action’s 2021 scorecard, voting for multiple measures with provisions advancing abortion and the LGBT agenda. FRC Action PAC endorsed Tshibaka. Perkins said she “understands the fundamental importance of protecting the right to life, the central role strong families must play if our country is to thrive, and that religious liberty is the bedrock of a truly prosperous nation.”

While Senate control remains undecided, Republicans fell short of gaining the 2-4 seat advantage many had hoped for. If other races are won by the candidate currently leading, control of the Senate will hinge upon the Georgia run-off, just as in the 2020 election.

The election also suggests limits to the popularity and enduring influence of former President Donald Trump. A common denominator to the four competitive Senate seats where Republican candidates have lost or are trailing is that all four candidates are political novices endorsed (and sometimes recruited) by Trump. Additionally, all four states were battleground states Trump lost in 2020 (by contrast, Trump-endorsed political newcomer Vance has won in Ohio, a state Trump carried). While strong ties to Trump may not be the reason for their losses, such a string of disappointments under the ideal conditions for a GOP victory will likely cause some strategists to identify a connection.

Not a single Senate candidate endorsed by FRC Action PAC or who received an FRC Action “True Blue” award has lost their race in the 2022 election. The two non-incumbents FRC Action PAC endorsed for Senate are Kelly Tshibaka in Alaska (headed for the ranked-choice process) and Herschel Walker in Georgia (headed for a run-off election). In addition to Ted Budd’s victory (N.C.) and Ron Johnson’s lead (Wisc.), all other “True Blue” incumbents won their races, including John Boozman (Ark.), Marco Rubio (Fla.), Jerry Moran (Kans.), James Lankford (Okla.), Tim Scott (S.C.), John Thune (S.D.), and Mike Lee (Utah). Taking a strong stand on social issues has not hurt them in the polls.