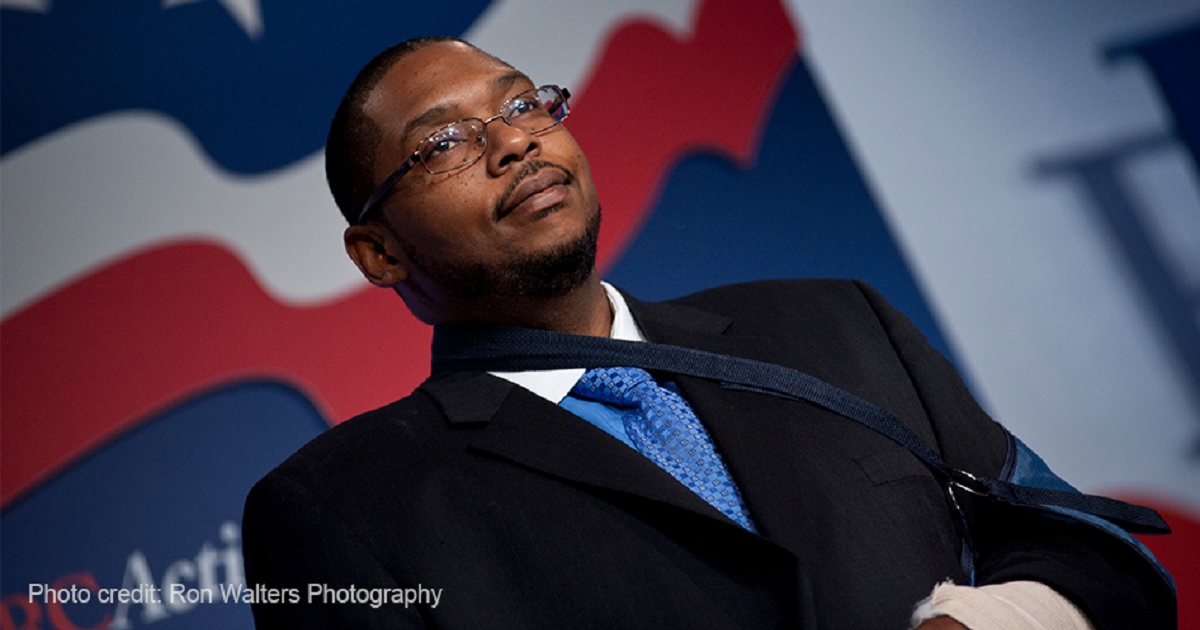 August 15, 2012 “started out as a typically normal day” for Family Research Council (FRC) building manager Leo Johnson, as he described it.

Johnson, who had seven years of experience as a security guard for FRC, had moved into the position of building operations manager, but still spent part of his daily shifts manning the guard desk in the lobby of FRC’s headquarters in Washington, D.C. Little did he know that on this day, in an instant, his life would be on the line, and would be forever transformed.

A Stunning Act of Heroism

In an exclusive interview with The Washington Stand, Johnson shared his testimony of what happened on a warm, humid morning in August 2012 in painstaking detail.

“I arrived at work at 6:30 a.m., opened up the building, and proceeded to my post at the guard desk in the first-floor lobby.

“As part of my job duties, I was tasked with manning the guard desk upon arrival until 11 a.m., at which time I was relieved to start my duties as the building manager. It was a pretty uneventful morning. At around 10:40 a.m., I was relieved of my post, and headed towards the elevators to start my other tasks for the day but decided to stick around at the guard station for a bit longer.

“A few minutes later, a gentleman [Floyd Corkins] approached the door and rang the buzzer. I asked how I could help, and he said he was interested in our intern program and wanted to speak with someone about a possible internship. I proceeded to let the gentleman in, and as he approached the guard desk, I asked for a photo ID. Corkins, who was carrying a backpack of average size, proceeded to remove the bag from his shoulder and placed it on the floor.

“Considering that the bag did not appear to be heavy, my curiosity was raised as to why he chose to put the bag on the floor instead of the desk counter. I sensed something was very suspicious with that and proceeded to walk around to the front of the desk to get a better view of what Corkins was doing.

“With his right hand already in his backpack, he looked up at me slowly, and at that point I knew that this was going to quickly escalate into a major altercation.

“My eyes were focused on his right hand, and as he started to stand upright, I could see the gun and I charged him, shielding my face with my left arm while grabbing for him with my right. Once I got a hold of him, the fight was on to gain control of the gun.

“As we wrestled for control of the weapon, I pushed his arms skyward and to the left of my head. I could feel that his finger was still on the trigger of the gun, and his intent was to shoot me in the head. Fortunately, I was able to push his arms far enough away from my head to avoid that, but just as I did, he was able to get off the first … shot.

“The first shot hit the fire panel in our lobby and the second shot hit my left arm [a third shot ricocheted and shattered a glass display case]. Despite being shot, I remained focused on getting the gun away from Corkins. With adrenaline on full blast, I was able to push Corkins against a nearby wall, and while using my wounded arm to secure a grip on the gun, use my right hand to strike him repeatedly until I could feel his grip on the gun loosen. Once he loosened his grip, I took control of the gun and forced him to lie on the floor until the police arrived.”

JP Duffy, FRC’s vice president for Communications, was in a meeting on the fourth floor when he received word from a phone call that Johnson had been shot.

“I ran to the window and was horrified to see Leo covered in blood as they rushed him into the ambulance,” he told TWS. “We were told that Leo[’s] arm was badly injured, [but that] he would thankfully survive.”

“I remember saying a prayer of thanks to God for his intervention and Leo’s heroism,” Duffy recalled. “Tony [Perkins, FRC’s president] and General Boykin [FRC’s vice president] quickly gathered the staff together and relayed what we knew at that point. We prayed for Leo’s recovery and then prayed for the gunman, praying that his heart would be softened and transformed by the truth of the gospel.”

It was subsequently discovered that Corkins had brought close to 100 rounds of ammunition and 15 Chick-fil-A sandwiches in his backpack. He later confessed that he had the intent of killing as many people in the building as possible and smearing their faces with the sandwiches. Corkins had become angered by FRC and Chick-fil-A’s public stance for biblical sexuality, having learned about FRC through the Southern Poverty Law Center’s website, which designated FRC as a “hate group.” Despite the shooting, the SPLC’s designation of FRC still remains to this day.

For his extraordinary act of bravery, Johnson was awarded the first-ever Mayor’s Medal of Honor by District of Columbia Mayor Vincent Gray in October 2012.

Ten years later, Leo Johnson has made peace with his brush with death, but his body will forever bear the physical trauma of that fateful day.

“My life has changed drastically since the shooting,” he shared. “There were a lot of physical challenges to overcome, from blood clots in my lungs to having bone removed from my pelvis to replace the bone in my arm that was too damaged to save or regenerate. I have been taking blood thinners to combat the clots, and will most likely have to for the rest of my life.

“My left arm is being held together with a metal rod and screws, but with a ton of physical therapy and God’s grace, I have been able to heal enough to resume most of the things I was able to do before.

“While the physical scars will always remain, my emotional state has always been strong. I spoke with investigators at the hospital after the shooting about my mental state and maybe needing therapy to deal with the post trauma of it, but I did not have any post trauma, and I never suffered any because I believe that the decision I made to spare Floyd Corkins’s life freed me from any trauma that I may have suffered had I not listened to God’s word and killed him.

“God gave me compassion towards the man that wanted to kill as many people as he could just because he disagreed with their religious beliefs. I don’t know that I could/would have made that decision alone.”

Tony Perkins, the president of FRC, was awestruck by Johnson’s merciful decision.

“A few things remain vivid from the day of the shooting,” he recalled. “The call from my assistant interrupting a meeting in my office saying she thought there had been a shooting downstairs, reviewing the security footage with the FBI, getting a text from my son asking if I was okay. But among the most memorable was waiting until after midnight for Leo to come out of surgery. After reviewing the security footage, I had a question that I had to ask him.

“Shortly after he came out of recovery, we saw him briefly. After we answered a few of his questions and he told us a little more, I asked him about disarming Corkins. After being shot by Corkins, Leo managed to get Corkins’s handgun and force him to the ground. Knowing that he was bleeding and uncertain what Corkins might try next, I asked Leo why he did not shoot him. That was the question the FBI agent and I asked when we reviewed the security footage.

“I’ll never forget Leo’s response: ‘God told me not to.’”

In September 2013, Corkins was sentenced to 25 years in prison after pleading guilty “to charges of committing an act of terrorism while armed, assault with intent to kill while armed, and interstate transportation of a firearm and ammunition.” He became the first person charged and convicted under the District of Columbia’s post-9/11 domestic terrorism law.

A Strengthened ‘Dependence on God’

For Perkins, Johnson’s powerful witness to God’s wisdom and the need to depend on Him brought to mind the words of Psalm 118:

I called on the LORD in distress; The LORD answered me [and set me] in a broad place. The LORD [is] on my side; I will not fear. What can man do to me? The LORD is for me among those who help me; Therefore I shall see [my desire] on those who hate me (Psalm 118:5-7).

Duffy was equally struck by the Divine hand that seemed evident in the events of that momentous day.

“The attack opened my eyes even further to the reality that our struggle is not against flesh and blood but is against the spiritual forces of evil in the heavenly realms [Ephesians 6:12],” he observed. “I came to FRC understanding that the organization had a God-given mission to advance faith, family, and freedom in public policy and the culture from a biblical worldview. Of course, I knew there would always be opposition, but I never imagined that standing up for God’s design for marriage could make us a target for a domestic terrorist attack.”

“The day after the attack, the FRC team came back to work,” Duffy noted. “While we were stunned, we would not be intimidated from the ministry work that God has called us into. Looking back, I can see that our dependence on God became much stronger because of what happened that day.”

‘Every Single Day Is a Blessed Day’

Despite the shooting, Johnson remains grateful for the ability to lead a “normal” life.

“It has been 10 years since the shooting, and I am still standing — still able to live a normal life, enjoy my family, friends, and co-workers,” he said. “God has blessed me to be able to walk away from something that very few people have ever been able to walk away from, and that will never be lost on me. Every single day is a blessed day.”

In FRC’s lobby, a sobering reminder of that fateful day in August still remains. A bullet hole from a shot that Corkins fired during his scuffle with Johnson can be seen by discerning eyes on a black fire control panel to the immediate right of the guard’s desk, which is now protected with bulletproof glass. It’s a testament to the terrible calamity that could have been, but also to the heroism and Divine protection that live on.