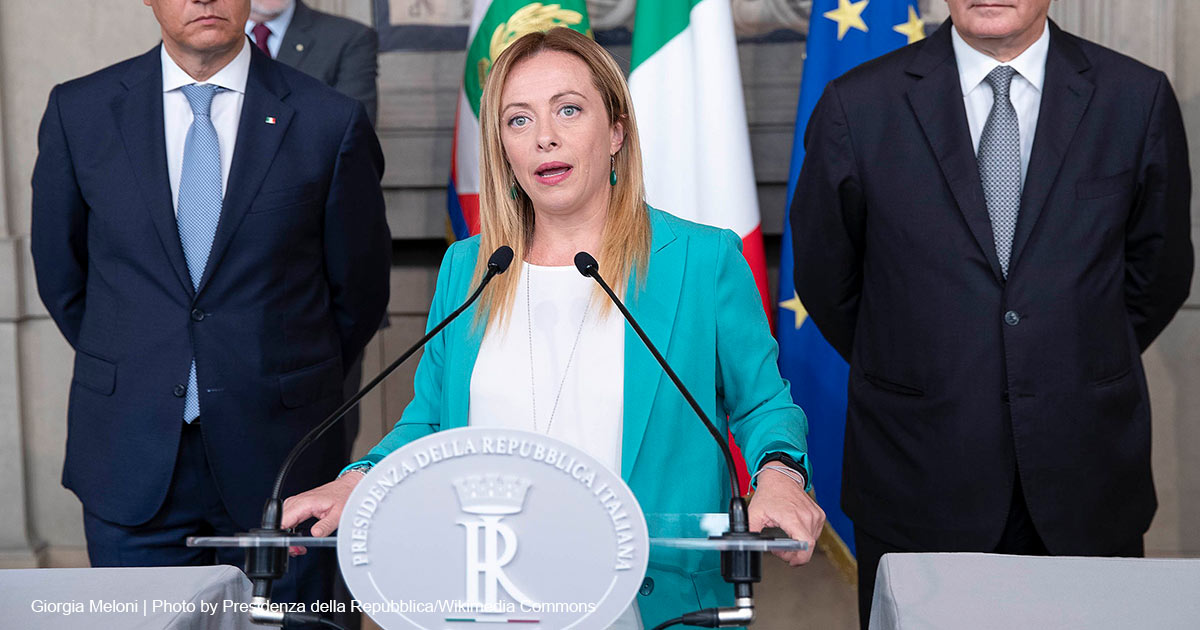 Giorgia Meloni and the Rise of Conservative Values in Europe

Though her critics were quick to tie Meloni’s alleged political history with a neo-fascist agenda, her straightforward approach to Italy, and by extension, Europe’s issues has garnered whole-hearted support from other conservative EU party leaders like Viktor Orban, Hungary’s longstanding prime minister, who called her victory a “well-deserved win.”  Likewise in America, Senators Ted Cruz (R-Texas) and Tom Cotton (R-Ark.) have also congratulated the new prime minister.

In a 2019 address to the World Congress of Families, Meloni called out the widespread progressive attack on “national identity,” “religious identity,” “gender identity,” and “family identity.” “I can’t define myself as Italian, Christian, woman, mother. I must be citizen x, gender x, parent 1, and parent 2. I must be a number,” she said.

Meloni’s pro-life and pro-family policies have already put a target on her back. France’s Prime Minister, Elisabeth Borne, has warned the incoming prime minister that the EU will be watching for potential “human rights violations” under her leadership.

But this is not the first time she received backlash from adversaries. When Meloni and fellow conservative party leader Matteo Salvini openly supported Orban, whose socially conservative policies essentially dubbed him the “black sheep” of the European Union, Giuseppe Conti, former Italian prime minister, gave her an ultimatum. “I say that either Meloni and Salvini backtrack and publicly acknowledge they were wrong about Orban, or I say they are unfit to govern Italy.”

Meloni joins central European leaders in a growing fight against the EU’s progressive social and economic agenda irrespective of each EU member’s national sovereignty. Many contend that the European Union’s political overreach defies its original purpose which was to maintain peace and provide a free trade zone among EU nations (managed by a regulatory system in Brussels) using a single currency. Rising tensions in the union, however, point to the EU’s failure to deliver on its promises, leading countries like Hungary, Poland, and now Italy looking for better solutions.

As president of the European Conservatives and Reformists Party (ECR Party), Meloni represents the values that the broader conservative movement in the West hold to be true. According to the party’s website, the ECR Party is committed to “individual liberty, national sovereignty, parliamentary democracy, private property, limited government, free trade, family values, and the devolution of power.” In a statement back in May, she said, “The ECR Party will continue its work to give a soul and a mission to Europe and build a confederation of free and sovereign states. A Europe capable of standing tall in the West and in the world. A Europe proud of itself, capable of defending itself from the threats of autocracies.”

Giorgia Meloni’s election comes at a time of major economic uncertainty not only for Italy, but for Europe as well. A Bloomberg report predicted tough times for the new prime minister’s new coalition, partly caused by Russia’s invasion of Ukraine, energy price hikes, rampant inflation, and rising interest rates.

Despite these challenging circumstances, however, the Italian prime minister is ready to assume her position. “Italy chose us. We will not betray it, as we never have.”

[EDITOR'S NOTE: This story has been updated to reflect that Meloni's remarks were given at the 2019 World Congress of Families.]