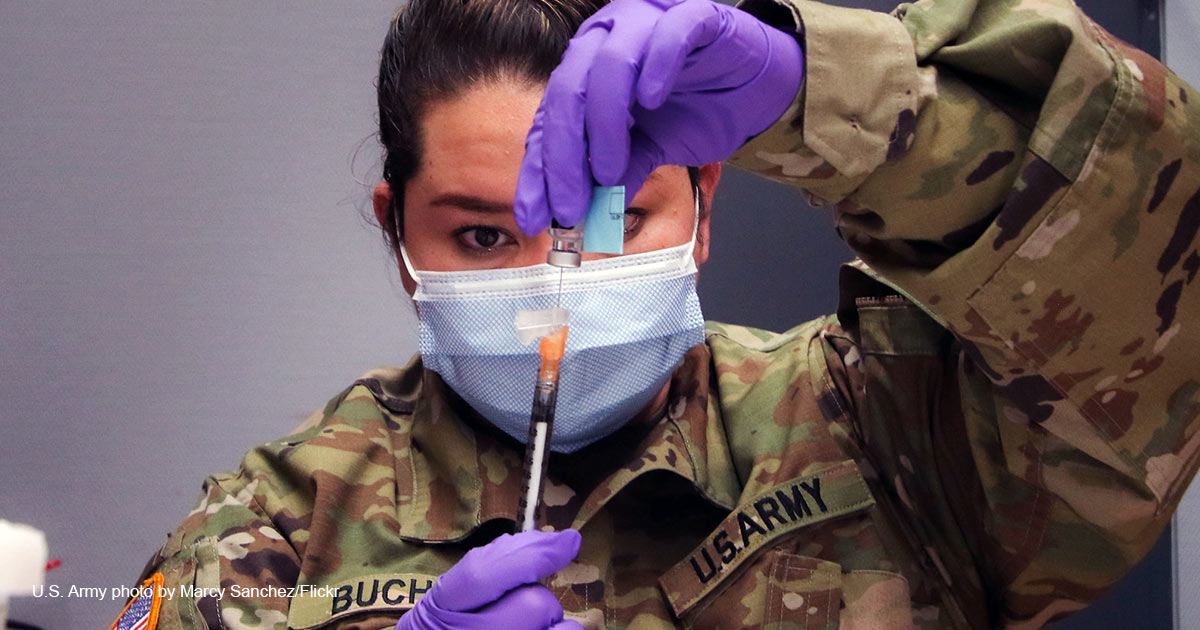 As Congress closes in on approving the next iteration of the defense authorization bill to fund the military for the next year, Republican lawmakers are threatening to withhold support for the measure until the Biden administration rescinds its COVID-19 vaccine mandate for all military personnel. Critics of Biden’s mandate point to how the policy has led to low recruitment numbers, lowering standards for new recruits, and unjust denial of benefits, among other issues.

Conflicting reports of Biden’s willingness to revoke the vaccine mandate have emerged in the last few days, with House Minority Leader Kevin McCarthy (R-Calif.) claiming that the president would remove the mandate, while White House officials stated on Monday that Biden in fact opposes the idea. At the same time, Senate GOP Whip John Thune (R-S.D.) said on Monday that Democrats are now leveraging the proposed mandate removal to obtain their own wish list of items. “The Dems have all kinds of extraneous asks that have nothing to do with defense,” he said. “They’ve now decided to try extract a huge ransom.”

Meanwhile, reports of the vaccine mandate’s negative consequences on recruitment continue. The Marine Corps admitted on Saturday that the mandate is “still having an impact in certain areas of the country on recruiting.” As of August, the Corps has expelled 3,299 Marines for refusing the vaccine, in addition to approximately “1,800 soldiers, 1,800 sailors and 900 airmen” among the military’s other branches.

For the Navy, recruiting problems are forcing the branch to seek recruits that would likely not have made it into the sailor’s ranks because of low Armed Forces Qualification Test (AFQT) scores. Military.com reported on Monday that the Navy released new guidelines that “allow the service to enlist thousands of sailors with entrance test scores that fall into the lowest aptitude percentile allowed by military standards.” This will allow the branch to recruit “up to 7,500 prospective sailors … who score within the 10th and 30th percentile” on the AFQT.

The move follows the Army’s decision over the summer to completely drop their requirement for potential recruits to have a high school diploma after the branch missed its recruiting goal by 15,000 soldiers. After the perspective policy was made public, the Army quickly abandoned it.

The loss of servicemembers’ benefits simply for declining the COVID vaccine is adding further controversy to the issue. On Monday, Rep. Chris Smith (R-N.J.) urged support for his proposal to restore GI bill benefits to veterans who were booted from the military over the vaccine mandate. Smith’s plan stipulates that no expelled servicemember would receive less than an honorable discharge and would also be allowed to “retain their earned educational benefits.”

Smith’s measure follows previous legislation that the congressman introduced in April that demands the reinstatement of servicemembers who were ejected from the military due to the vaccine. Other lawmakers, including Rep. Brian Mast (R-Fla.), have introduced legislation to reenlist discharged military personnel as well.

Reports of the Naval Academy denying a diploma to a graduate because of her religious exemption request from the vaccine has sparked further outrage. Congressman Greg Steube (R-Fla.) sent a letter last week to Naval Vice Admiral Sean Buck demanding clarity on the issue. “Denying diplomas to otherwise qualified Midshipmen based solely on COVID-19 vaccination status would not only be a waste of our country’s four-year investment in Midshipmen who are eager to serve our nation, but could disrupt military readiness in a year that every branch had trouble recruiting,” he stated. “The U.S. Naval Academy must provide full transparency of their process to deny diplomas … including details of cases where Midshipmen’s religious exemption requests were also denied.”

“What we need to understand is that those same people that we consider to be the chain of command are the ones who are bullying the young members of our military today,” he observed. “And if we go into combat tomorrow, do you think that they’re going to want to follow a chain of command that has a history of bullying them? It takes a unity of effort and cohesion to be able to get out and win on the battlefield. And right now, what we’re doing is destroying any notion that our military is unified or prepared for battle.”

“People don’t want to come in [to the military],” Boykin continued. “I just spent the weekend at The Cove, Billy Graham’s facility [near] Asheville with about 75 chaplains from all services. And I got to tell you, there was not a chaplain there that had received a religious exemption. Not one chaplain. Now, if a chaplain can’t get a religious exemption, you know that there’s something wrong.”

“This is a tragedy,” he concluded. “We better get our heads on straight here and get this fixed because our military is key to the future of this nation. And right now it’s in decline.”