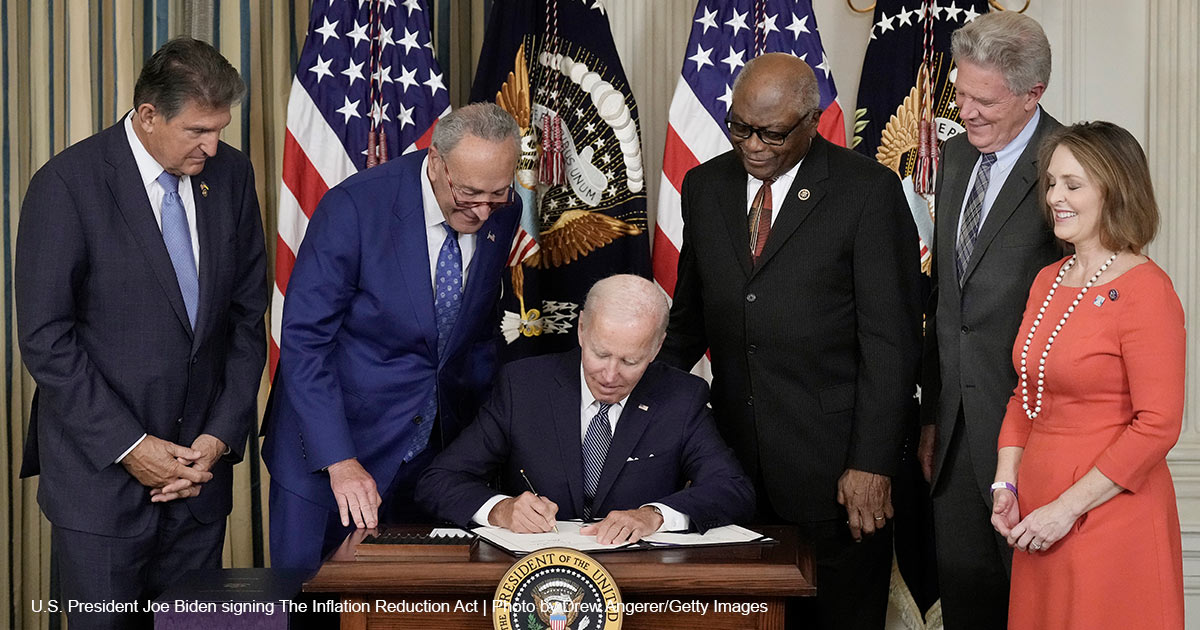 ‘Made in USA’? Experts Say Biden’s Anti-Supply Side Policies Are Intensifying Inflation

On Tuesday, President Biden signed the “Inflation Reduction Act” into law, a $437 billion spending package that received no Republican votes when it narrowly passed the Senate on August 7. Economic experts say that the Inflation Reduction Act will not reduce inflation, and that Biden’s economic policies ignore underlying issues that are the real causes of the record-high inflation that is squeezing the wallets of Americans.

“We just had two quarters of back-to-back economic shrinkage,” he told guest host Joseph Backholm on Tuesday’s edition of “Washington Watch.” “Economic growth is negative. And on top of that, we got 9.1 inflation, down to 8.5, but it’s still [a] 40-year high.” But as Brat pointed out, instead of reducing fiscal and monetary expenditures, as is customary for governments to do in order to combat inflation, the Biden administration is doing the opposite.

“You’re supposed to match the percentage increase in money stock with the percentage of GDP growth,” Brat explained. “So if the economy is shrinking or zero growth, you shouldn’t be printing any money. And so they’re stimulatory on both the fiscal side and the monetary side. So it’s a disaster that spells long-term, higher, enduring inflation. And I think we’re going into a more serious recession as well.”

Brat went on to observe that studies indicate that Americans do not share Biden’s confidence that inflation is ending.

“[The] Michigan consumer sentiment study … measures how Americans are feeling about … present economic conditions as well as the future expected conditions … They’re going straight down. And not only are they down, they’re at all-time lows. In fact, the consumer is feeling about exactly the same level as at the bottom of the ‘07/‘08 financial crisis.”

According to Brat, worrying signs in the economy go well beyond inflation. The deeper issue that the Left is ignoring is the business output — the supply side.

“The supply side, incentivizing innovation, entrepreneurship, capital, deepening capital investment, investment in our kids, skill sets in K-12 education, getting them ready for the workforce — those are all noticeably absent [from Biden’s economic policy],” Brat argued. “[Robert Gordon of Northwestern has] shown productivity growth has been going down for 40 years in a row. It’s at zero now. Total factor productivity is the only variable that causes long run economic growth … other things cause growth, but they all level out. Total factor productivity is the only thing that causes long term economic growth … and that’s coming to an end. It’s at zero. And so that’s why you’re seeing all these shortcuts and tricks with monetary policy and fiscal policy, because they’ve run out of bullets on the real economy.”

Brat went on to detail how crucial productivity is in keeping the American economy healthy.

“Productivity [is] the connector between labor and GDP growth. So [we] got more workers, but we’re producing less stuff. And so people don’t care how many people are working. You care how much you’re consuming, how much stuff do I get with my paycheck? I want real stuff. And that’s GDP … No one’s interested in maximizing the amount of labor. We want to maximize the effectiveness of labor. Give the American worker capital to work with. That’s what made us the richest country on earth. And our productivity and capital investment is nil right now. And so we’re not doing any of the right moves and there’s no sign that we’re moving in the right direction.”

During a recent House Transportation Committee hearing, Rep. Bruce Westerman (R-Ark.) illustrated the problems that can occur when the U.S. fails to manufacture the capital necessary to meet demand. He noted that as a ranking member of the House Natural Resources Committee, he has observed that the Biden administration is withdrawing mining permits from federal lands for companies to obtain minerals and metals like lithium and copper, which are critical to the production of solar panels and electric vehicle batteries.

Instead, Westerman stated, the U.S. is “relying on China and other countries to provide the minerals and elements that we need that we’re not developing here.” As he and others have pointed, this strategy appears to directly conflict with policies like the Inflation Reduction Act, which includes tens of billions of dollars in tax breaks for Americans to buy solar panels and electric vehicles.

“Everyone is politicizing the entire economy, and the Republicans better be careful to do the right thing themselves,” Brat concluded.