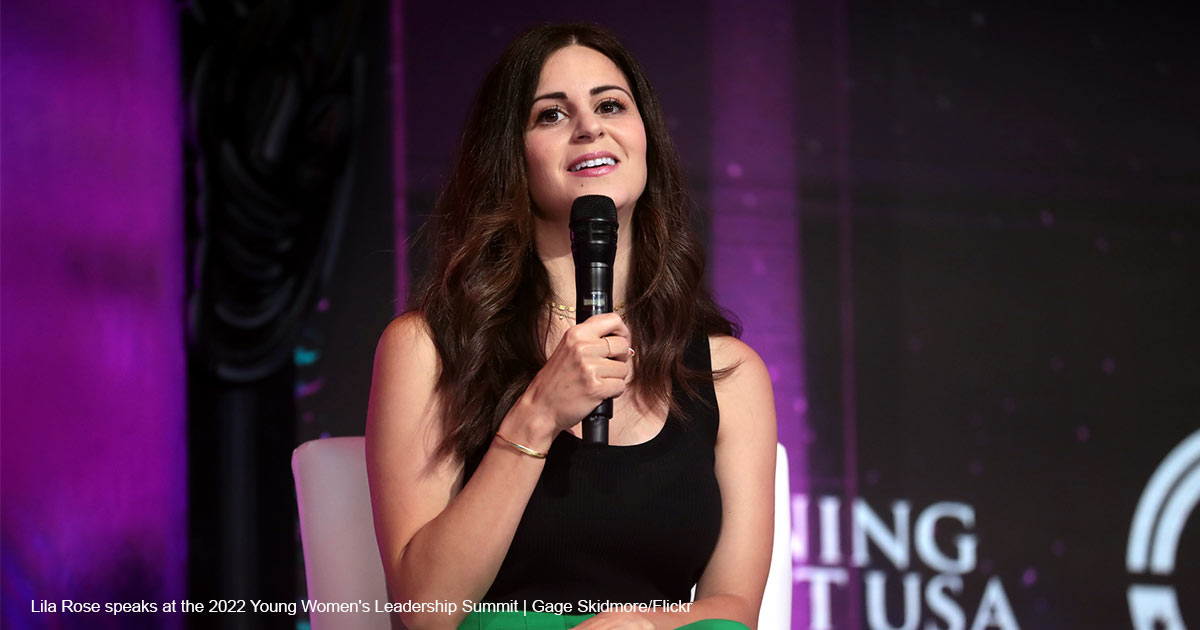 Pro-Life Advocacy Gets a Platform in Pop Culture

June’s Dobbs Supreme Court decision put abortion at the epicenter of public forum debate, paving a platform on mass media for advocates to lay out a case for life. Last night, an episode of “Dr. Phil” aired on the topic of abortion, featuring president and founder of the pro-life organization Live Action, Lila Rose, along with a number of individuals representing the pro-abortion side.

The episode hinged on the tragic headline of Nancy Davis and her boyfriend Shedric, who discovered that their unborn fourth baby had acrania in July. Given the baby’s deadly diagnosis, she sought out an abortion, but in post-Roe Louisiana, could not find a doctor willing to carry out one amidst the trigger laws, despite the “medical futility exception” in the state’s law. The couple made plans to go to North Carolina for the procedure, where abortion is allowed up to 20 weeks. On the show, they were joined by their attorney, Louisiana civil rights lawyer Ben Crump, and Louisiana State Senator Katrina Jackson (D), the author of the medical clause in the state’s abortion regulations.

“[You] don’t think Nancy should have been able to have an abortion?” Dr. Phil asked Rose concerning the woman’s prenatal diagnosis. She responded, “Nancy my heart broke when I heard your story because that’s the worst thing any mom wants to hear is that their baby is going to die, their baby has a life threatening illness.” Rose opened up about her own miscarriage, saying “they were some of the darkest days of my life… because it was our child. We knew it was a baby.”

Rose later took to Twitter to further respond to the hard circumstance. “In cases of life-threatening conditions for preborn children, perinatal palliative care and hospice care can be offered to the baby so that if they pass in utero or shortly after birth, they have the best medical care and are treated with dignity,” she tweeted. “Special care should also be offered to the mother and grieving family. Killing the baby before he or she dies naturally is never the solution. It violates the fundamental principle of medicine — to heal, or provide comfort, never to harm.”

Next, Dr. Phil then posed the question, “Should a 10-year-old rape survivor be able to get an abortion?” Opening the discussion to the live audience, one woman became increasingly escalated in her reaction towards Rose, saying that she was a “traitor to [her] own.” She tearfully yelled, “There is nothing you could possibly say to justify that level of lack of empathy.”

Rose rebutted, “Abortion is devastating to women’s mental health, no one talks about that. The trauma is from the rape, the child is an innocent party. We should not take out generational sin on a child… that’s not fair to the child. Our fundamental human right that we all share in this room is life. It’s the first human right. Laws are meant to protect the weak. Who’s the weakest in a society? A child. They don’t have a voice, they can’t speak… Whether you live 10 minutes or 10 years or 100 years, you’re a human life and you have the right to not be killed. And that’s what the pro-life fight is all about.”

Joy Stockbauer of FRC’s Center for Human Dignity told The Washington Stand that bringing up difficult cases such as Nancy’s and the tragedy of the 10-year-old rape victim has become an increasingly common tactic on the pro-abortion side, “because the abortion industry knows that manipulating human empathy with extreme situations is their last hope to defend the indefensible killing of unborn children.”

She continued, “In reality, the circumstances of conception or medical complications surrounding a pregnancy are never an excuse to deny the human dignity of the unborn child. Abortion does not heal the wounds that rape causes — it only harms the mother further. Abortion is not necessary to save a mother’s life — premature delivery is the appropriate path to respecting the dignity of both mother and baby, even in cases where the baby is tragically unable to survive.” Stockbauer and FRC’s Mary Szoch wrote a seven-part commentary for TWS on “Protecting Life, Without Exceptions.”

In closing, Dr. Phil tells Rose that her premise is off, stating, “The predicate of your positions, that life begins at fertilization and science is very clear about that — you have to know, there is no consensus amongst the scientific community that life begins at conception.” Rose interrupts with a correction, telling the host that 96% of biologists do, a fact confirmed by the Lozier Institute.

Recently, a similar high-profile pro-life conversation occurred when Babylon Bee CEO Seth Dillon went on “The Joe Rogan Experience” for one of Rogan’s famous multi-hour discussions. Between the two comedians’ laughs and conversation covering a vast array of topics, they talked extensively about abortion and if it is ever okay to take a human life.

Rogan posed the hypothetical tragedy of a 14-year-old girl pregnant with her rapist’s child as a scenario in which abortion would be moral, to which Dillon rebutted, “I don’t think two wrongs make a right. I don’t think murder fixes a rape. I would say it is wrong to intentionally kill an innocent human life. Abortion intentionally kills an innocent human life. Therefore, abortion is wrong.” While the popular podcast host maintained his view that he did not have the “right” to tell a woman what to do, he and Dillon agreed to disagree, remained civil, and remarked how respectful conversations across the aisle are a modern day rarity.

Stockbauer applauded Rose and Dillon for their pro-life advocacy on popular media. “It is so important for pro-lifers to be willing to enter the public square and share the truth about what an abortion is and why it is always wrong,” she told TWS. “The mainstream narrative has been dictated for too long by abortion extremists. The abortion lobby thrives on lies and misinformation — it is their chief tool for manipulating women and boosting their own profits. Pro-life advocates like Lila Rose and Seth Dillon provide an excellent example of how every pro-lifer can use their own platform to speak the truth — whether it is at school, in church, or simply to their own family.”