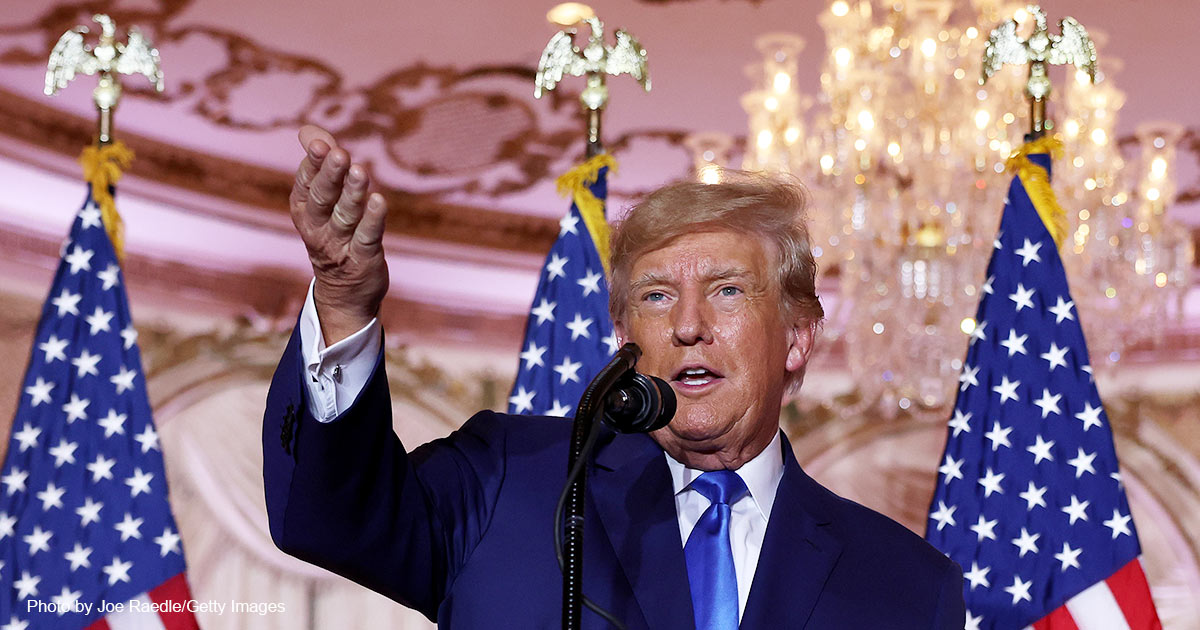 The Log Cabin Republicans, an LGBT group, hosted their “Spirit of Lincoln” gala Thursday night at Mar-a-Lago, the residence of former president Donald Trump. As Politico described the festivities, the event was a “joyous celebration of gay rights and — in a case of ironic timing — the historic same-sex marriage law signed by President Joe Biden days earlier.” Trump himself delivered “an enthusiastic affirmation of gay rights,” Politico continued. Said Trump, “We are fighting for the gay community, and we are fighting and fighting hard.”

“It’s not the first time, actually, that we’ve seen the Log Cabin [Republicans] have an event there in Mar-A-Lago,” said FRC president Tony Perkins on “Washington Watch.” In fact, “other Republican leaders have been involved in the past. What was encouraging to see this time around [was] that we did not see the RNC involved.”

While Trump and the Log Cabin Republicans celebrated the congressional codification of same-sex marriage in the “Respect for Marriage Act,” evangelicals and other social conservatives were grieved. Perkins called it “a dark day for religious freedom.” He noted that “Marriage is an institution created by God for the well-being of men, women, children, and society as a whole — it cannot be redesigned without impoverishing them all.”

“We love all people, and all Americans have rights that need to be protected, but we cannot affirm all choices equally,” Perkins explained on “Washington Watch.” “We have to work toward what is best for society as a whole. And disassembling marriage, redefining it, and failing to acknowledge that God created male and female — that is not moving our society in a way that is beneficial to all.”

Perkins and “Washington Watch” guest host Joseph Backholm continued to discuss the implications Trump’s decision might have on his relationship with evangelicals. “The church and social conservatives have something of a complex relationship with the former president,” said Backholm. “Complex, but I also think it’s transactional,” Perkins added. “SAGECons — spiritually active, governance engaged conservatives — were central to President Trump’s success in 2016. They are motivated not by personality, not by party politics, … but rather to policies that are in alignment with biblical truth and principles.”

Evangelicals supported Trump because of the policies he embraced, argued Perkins. “They were very supportive of the president when he wrapped himself in the party platform in 2016,” he noted. Backholm added, “‘Marriage is an institution between one man and one woman’ is a tenet of the Republican Party platform, which Trump embraced as both a candidate in 2016 and as the incumbent in 2020.”

Trump’s commitment to the party platform translated into a number of policy victories for social conservatives. “He, of course, was probably the most pro-life president we’ve seen in several generations,” listed Backholm. “He was great on the Supreme Court, on religious freedom. He seems to actually intuitively get the gender stuff as well.” Perkins agreed. “In 2020 he had a track record, his policies were very supportive of religious freedom, of traditional values. … He set a benchmark, which I think evangelical, SAGECon voters are going to hold him accountable to.”

But Perkins said Trump could lose support among evangelicals and SAGECons if he reneges on his commitment to family, marriage, and religious freedom. “He can’t go down this path of trying to champion the redefinition of marriage and the confusion that comes with all this gender ideology — he can’t expect to have the same support that he has enjoyed, embracing these types of policies. Nor can any other Republican or Democratic candidate for that matter.” Perkins repeated himself for emphasis, “if the quotes attributed to [Trump] from last Thursday’s event are accurate, he cannot go down that path and expect evangelical support to be as strong as he’s seen it in the past.”

Backholm wondered whether Trump’s hosting a gala to celebrate same-sex marriage could signal an attempt by his followers to change the party platform. “We need to pay attention to this,” Perkins responded. “We’ve got to be very clear, and we have been.” Perkins was a member of the platform committee in 2016. He attributed the RNC’s decision to step away from the Log Cabin Republicans, at least in part, to the party platform’s clarity on marriage. “They realize the importance of the party platform and the importance of that platform to conservative, evangelical, SAGECon voters.”

But, most importantly, Perkins said, Christians will support natural marriage whether or not their party platform spells it out. “For Christians, it’s biblical, and the [Supreme] Court can’t change it. The Congress can’t change it,” he said. “We have to be very clear that we see marriage as an institution created by God. And human sexuality is an issue that God speaks to because he created man. And I don’t care [which way] the culture winds blow. We have to stand firm on that word.”