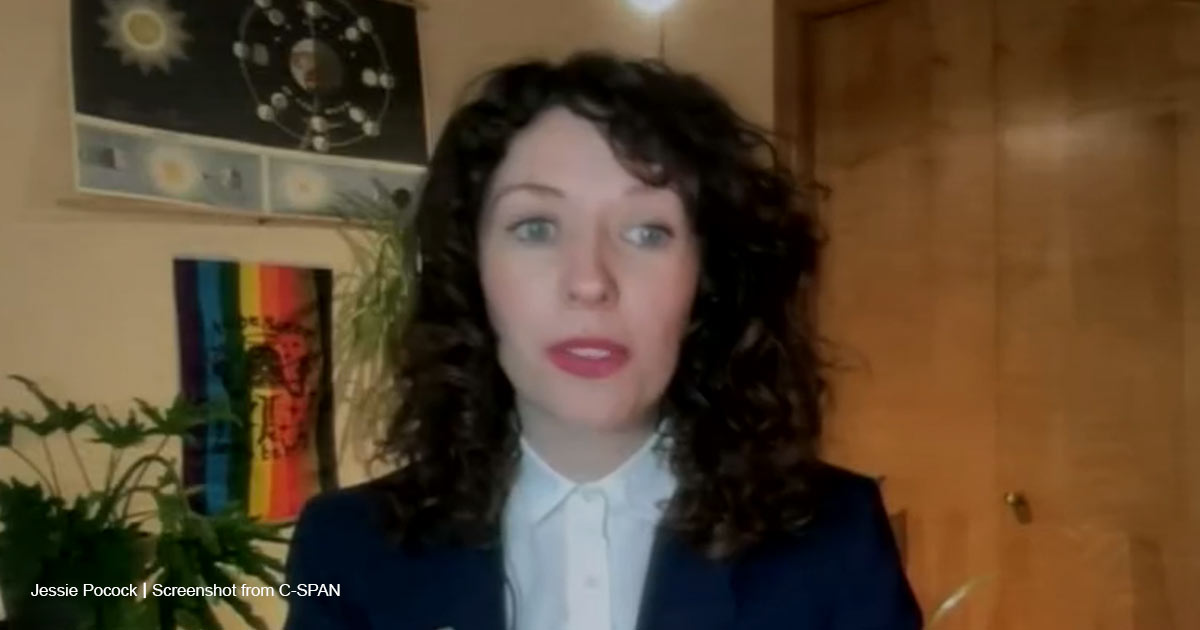 A Democratic witness at a Wednesday House Oversight hearing made shocking admissions calculated to goad into action all mama bears everywhere. She described a startling scenario, where the state granted LGBT activists open season on adolescents, while slamming the door in the face of parents.

The admission by Jessie Pocock, CEO and director of Inside Out Youth Services Advocacy Organization in Colorado Springs, came during an exchange with Representative Michael Cloud (R-Texas), who asked her, “Do parents have a right? Should they be informed about what’s going on … in their kids’ lives?”

With this offensive preamble, Pocock believed the coast was clear. But she still avoided the bare admission that she doesn’t believe parents have a right. Instead, she fell back on Colorado state law, passed at the behest of LGBT activists. “In terms of parents’ rights to know at schools, I mean, here in Colorado, parents don’t have the right,” she stated. “If a young person is questioning their gender or their sexuality, there are laws in place that say they have the right to process that with their trusted counselor, and so forth.”

Of course, it’s not quite as straightforward as that. In 2019, Colorado passed a law that turned gender counseling into a one-way ratchet — licensed counselors could help children transition to a different sexual orientation or gender, but they could not help them to resist transition or change back. This law only enlarged the role of parents to provide their children with loving care and support — except that the state sought to exclude them from the process entirely. Over recent decades, LGBT activists have manipulated Colorado law so that their voice, urging children to transition, is the only one considered worthy of “trust.”

Colorado’s policy bears many similarities to that developed by Sam Brinton during his time at The Trevor Project, and LGBT advocacy organization. Brinton, who identifies as non-binary and often sports lipstick and a goatee, recently gained notoriety for stealing women’s luggage from airport carousels, for which he now faces felony charges. After the incidents occurred, he was fired from his federal position in the Energy Department’s Office of Nuclear Energy and lost his high-level security clearance.

At this point in the hearing, Cloud changed his approach to investigate what Pocock meant by “a young person.” He asked, “So, you do a significant amount of your work with kids even starting at age 13?” Inside Out YS advertises work with “LGBTQIA2+ youth, ages 13-24.” If their target audience was in doubt, consider their name is taken from a Pixar film. When Pocock answered affirmatively, Cloud followed up, “What would be the age of consent, then, in your mind?”

That’s another question Pocock was unwilling to answer directly. “In our community, the age of consent to mental health therapy is 12 years old.” Alas, that is true throughout Colorado, so long as “the mental health professional determines that: (1) the minor is knowingly and voluntarily seeking such services, and (2) the provision of psychotherapy services is clinically indicated and necessary to the minor’s well-being.” That’s a low bar to clear. Transgender activists insist (on flimsy evidence) that gender transition services are practically always “clinically indicated.” As Pocock herself said a moment later, “it prevents suicide.”

Pocock never answered Cloud’s question, “What would be the age of consent, then, in your mind?” Instead, she preferred to answer the unasked question, “What is the age of consent, then, in your community?” But she did confirm that her organization will “serve young people at age 13.” Why not 12-year-olds, as the state law permits? Perhaps that one-year age difference signifies Pocock’s own personal belief, or simply the standard practice among LGBT groups (whether or not state law permits).

In any event, it’s safe to assume that, if Pocock did not believe 13-year-olds could consent to gender transition procedures, she would not be running an advocacy organization that practices that policy. It’s also safe to assume that, if Pocock believed Colorado’s policies to transition children as young as 12 and hide it from parents was right, she would not have used the state law as a shield from having to provide her own personal position. While Pocock may or may not agree with every particular of Colorado’s law, she gave no indications that she objects to its broad strokes.

The legislative coup LGBT activists have achieved in Colorado they want to export to the rest of the 50 states. That’s more difficult in some states than in others. Where legislatures are particularly unfriendly to their agenda, LGBT activists have demonstrated a willingness to stoop to even the grossest mischaracterizations — for instance, slanderously dubbing Florida’s Parental Rights in Education Act as the “Don’t Say Gay” bill.

LGBT activists hope to force even the stubbornest states to imbibe their woke hemlock — by federal fiat, if required. That’s how we got an LGBT activist telling Congress that middle schoolers will commit suicide if their parents know about their gender transition in the first place. LGBT activists in the Biden administration, and particularly in the Departments of Education and Health and Human Services, have aggressively promoted the LGBT vision for secretly transitioning kids through federal action.

LGBT youth organizations like Inside Out YS have popped up all over the country. These nonprofit organizations exist to create an institutional infrastructure for the LGBT community, and they usually involve adults talking to children they aren’t related to about their sexuality. It’s easy to dismiss them as unsustainable startups, but these organizations often have rich sponsors. For instance, Inside Out YS boasts T. Rowe Price and AAA Insurance among its sponsors.

While LGBT activists currently demand access to minors without their parents’ knowledge, the possible future implications of this civilizational erosion are even more concerning. For instance, once the age of consent for gender transition procedures is lowered to age 12, what prevents it from being lowered any further? What prevents other ages of consent (that of intercourse or marriage, for example) from being lowered just as far? If there is no problem with, say, a 13-year-old and a 24-year-old hanging out in an online chat room for “support” without the knowledge of any guardians, what prevents them from one day eloping? Worse, what prevents a 24-year-old Mr. Wickham from taking advantage of a 13-year-old Lydia Bennett — in a society that will merely shrug at his actions?

Already the pressure is building toward legitimizing pedophilia. The Left claims that conservatives bring this moral evil into the conversation as a straw man, arguing that terms such as “groomer” are merely slurs directed against the LGBT community. But a sitting, elected member of Congress saw fit to defend pedophilia during the same Wednesday hearing. Said Representative Katie Porter (D-Calif.), “You know, this allegation of ‘groomer’ and ‘pedophile,’ it is alleging that a person is criminal somehow and engaged in criminal acts merely because of their gender identity, their sexual orientation, their gender identity.”

It’s no longer conservatives suggesting a connection. Leftists are openly avowing pedophilia as the next “sexual minority” (aka sexual perversion) to achieve legitimacy. Once our society takes the small remaining step, how can our government protect anyone from abuse? Without a clear and coherent moral framework for sex — as Christianity has long provided — there is no bottom to our society’s slippery slope of immorality.